Penguin Travels Every Year To Visit Man Who Rescued Him In 2011, a retired bricklayer and part-time fisherman found a starving, oil-covered penguin lying on his local beach in southeastBrazil. Joao Pereira de Souza, 71, scooped up the bird and took him home. He cleaned the bird, fed him, and named him Dindim. When Dindim was strong enough, Pereira de Souza took him back to the sea.

But the bird wouldn’t go.

The Magellanic penguin stayed with Pereira de Souza for another 11 months at his home in Ilha Grande before finally returning to the ocean.

And then, a few months later, he was back.

Dindim has returned to Pereira de Souza’s island village every year for the last five years. 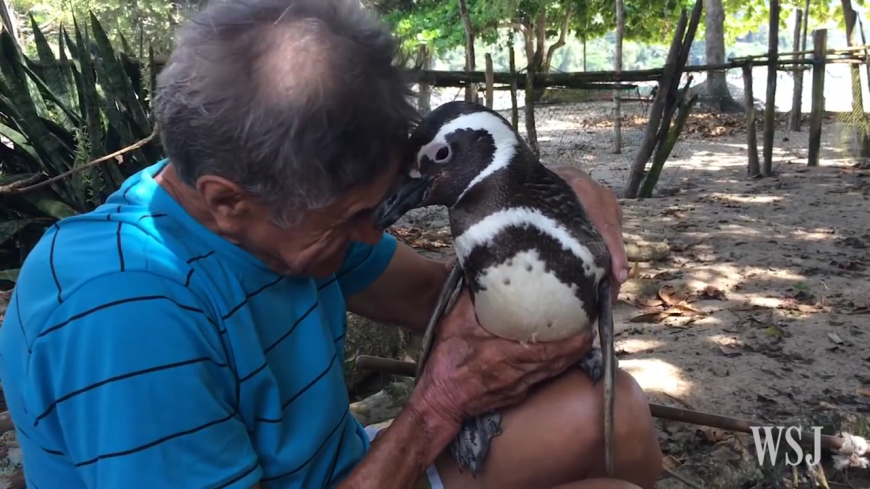 “I love the penguin like it’s my own child and I believe the penguin loves me,” Pereira de Souza told Brazil’s Globo TV. “No one else is allowed to touch him. He pecks them if they do. He lays on my lap, lets me give him showers, allows me to feed him sardines and to pick him up.”

João Paulo Krajewski, a biologist who contributed to the original reports about Dindim, said on Facebook that he believes the bird now interprets Pereira de Souza’s home in Ilha Grande as its land-based habitat, instead of its traditional breeding ground in Patagonia.

“When all the Magellanic penguins are going to Patagonia, Dindim goes to Ilha Grande and recognises Mr. Joao,” Krajewski wrote.