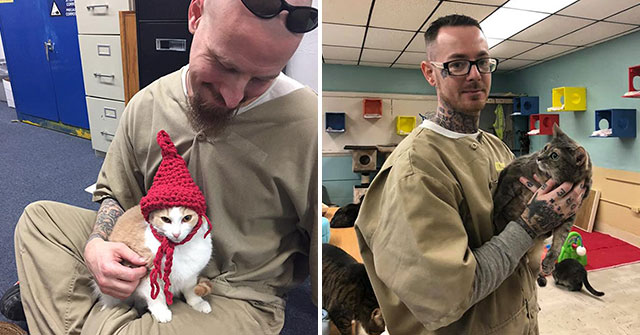 In 2015 the state of Indiana and the Animal Protection League started a wonderful program called F.O.R.W.A.R.D (Feline and Offenders Rehabilitation With Affection Reformation and Dedication) in Pendleton Correctional Facility.

The idea behind this program is to take cats from shelters and place them in prisons with inmates, so they can be taken care of. The program has proved not only to be benefical for the cats, but also the inmates as well.

Many cats from shelters often have a long history of abuse and neglect, leaving them unable to trust humans.

While the cats are being cared for by prisoners, who feed them, clean them and groom them, the cat are able to learn to trust and socialize with humans again. This helps the cats get adopted faster.

And the prisoners learn how to take care for and be responsible for a living creature.

“I’ve had offenders tell me when they got an animal, it was the first time they can remember they were allowing themselves to care about something, to love something,”

“It teaches them responsibility, how to interact in a group using non-violent methods to solve problems and gives them the unconditional love of a pet – something many of these inmates have never known,” the APL writes on their website.