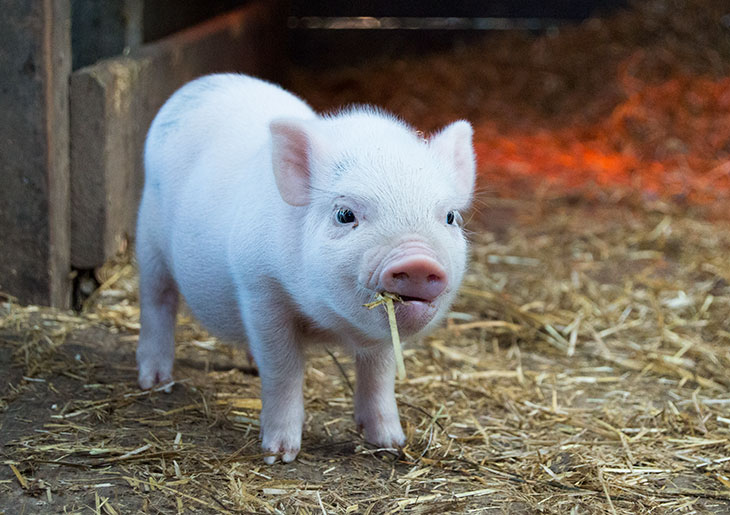 Are you considering adding a teacup pig to your living space? While they might look cute and cuddly, they also have many habitat and health requirements that need to be kept in mind. Below is more information about them and whether or not they make good pets.

• At their full growth, they can weigh anywhere from 100-200 pounds.
• They are classified as potbellied pigs.
• Miniature pigs have short fur and rarely shed making them a good pet for those who have severe allergies.
• They have a wide vocal range that varies from screaming to honking sounds.
• Miniature pigs are very clean creatures and will not use the bathroom in places where they eat or sleep.
• This animal is very intelligent and has been shown to have an impressive memory.

Can You Have a Mini Pig as a Pet Legally?

Teacup pigs can be considered as a pet in a few places, but it mainly depends on where you live. Many towns and cities still categorize teacup pigs as livestock and keeping one at your living space could end up causing numerous legal problems. Because of this, it’s vital you check your local home regulations to ensure you can legally keep a mini pig as a pet.

Teacup pigs are very smart creatures, but their temperament can vary. This is because pigs aren’t traditionally domesticated which can result in your miniature pig feeling scared or threatened around people and animals they don’t know. Due to this, your mini pig might become a little feisty around them. Overall though, miniature pigs have a somewhat calm temperament and can be very empathetic although this will really depend on the personality of your pet. Teacup pigs also eventually learn to trust their owner which can result in a strong bond.

This animal has some unique habits compared to other pet types. They are extremely smart, so they can be trained to do things such as ring bells to alert you to when they’re hungry or need to go outside. When they are younger, they can be very playful, but soon mature into docile creatures. However, they can also be quite stubborn and must be taught “no” to bad behavior early on. Otherwise, they will remain obstinate and continue doing the things they aren’t supposed to.

Despite their size, miniature pigs need a somewhat large space to live in. While they can be kept indoors, this can sometimes result in major messes. Because of this, it’s usually ideal to make an outdoor teacup pig enclosure that includes a home they can walk into, a source of water, space where they can walk and run, and a fence to keep them from wandering away. You also need to make sure that your pig stays warm or cool during various times of the year, something which can be done by giving them plenty of blankets, a mini pool filled with ice, making them mud puddles, or keeping them inside for a bit.

For those who would like to keep their pig indoors, you need to make sure you have an adequate amount of space for them to roam around in. You also need to train them to use the bathroom in certain places in the home or to alert you to when they need to go outside to do so. Keep in mind that if you don’t have a green space to let your pig run around and play in, such as with an apartment, a teacup pig will not be a good fit for your living space.

Miniature pigs enjoy eating so their diet includes numerous options. However, pet owners need to make sure that it’s mainly composed of leafy greens (like lettuce and spinach) and grains. They also need to have plenty of protein which can be obtained through items such as sunflower meal and insect meal.
While they can consume many different things, there are a few options pet owners need to watch out for, such as potatoes, milk, apple seeds, and raw beans as these can be unhealthy and toxic to pigs in high amounts.

Numerous veterinarians are able to treat and do check-ups on teacup pigs, although sometimes the pigs can be nervous during exams due to them being restrained. Your teacup pig needs to have regular check-ups to ensure they are healthy and to receive any vaccines to prevent the spread of disease. Because miniature pigs are also smaller versions of their breed, they can sometimes have immune system issues, something which regular veterinary care can help to prevent.

Vets will also usually recommend that you spay or neuter teacup pigs which can help to calm them down significantly and prevent possible injuries and reckless behavior due to excessive hormones.

Mini pigs aren’t necessarily high-maintenance pets, but you do need to perform basic chores every day for them, such as feeding them meals and making sure they get enough exercise. Besides this though, miniature pigs are very easy pets to have. However, while easy, their expenses can sometimes be costly, so you need to make sure to have some money stored away to buy them food, pay for vet bills, and other necessities.

What Type of Owner Would a Teacup Pig be Best For?

The best type of owner for a teacup pig would be someone who is looking for a fun and hypoallergenic pet to add to their family. This person also needs to be aware that they will have to clean up after and care for their pig often, whether that is tidying their outdoor enclosure daily or giving them the occasional bath. Because of this, a teacup pig pet owner needs to be ready to be active with their pet, but not in the same way that they would be with a dog or cat.

Is a Teacup Pig a Good Pet?

The teacup pig is a good pet, but needs to be well-taken care of. While they aren’t necessarily high maintenance, you will find yourself needing to invest a bit in them. Despite this, they make good pets for those who have allergies or who want a unique and intelligent companion to add to their home.