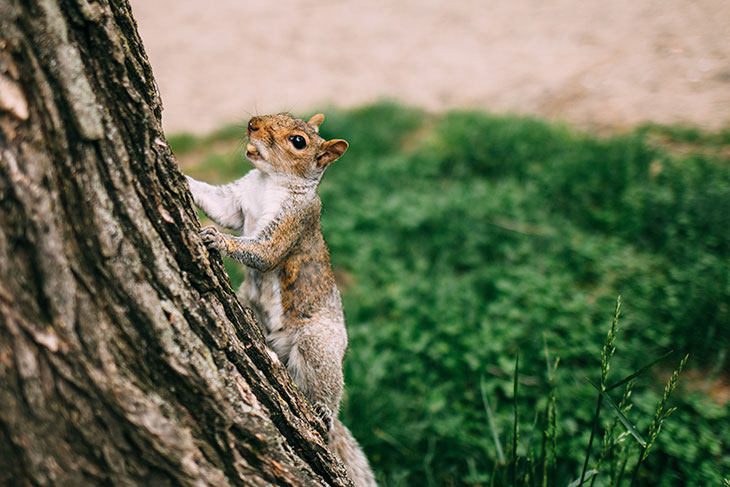 These are cute and funny portraits, but they may not be entirely fair. In fact, as we’ll shortly explain, there is a lot more method to a squirrel’s apparent madness than may first appear (there would have to be, or evolution would have made sure there were a lot less of them). It’s also unfair because squirrels and their nutty antics actually help plant millions of trees. So the squirrel might not be a hapless and hectic clown so much as a tireless environmental champion.

Why Do Squirrels Bury Nuts?

But let’s start with the basics. If you’ve ever watched a squirrel burying its nuts, glancing around it nervously for potential thieves, then you were probably looking at a gray squirrel. Although these adaptable creatures have now learnt how to make our leftover take-away food part of their diet, historically they have tended to feast mostly on seeds, nuts, acorns, berries and pinecones. This is otherwise known as the supermodel diet.

The problem is, of course, winter, when all of nature’s luscious bounty freezes over. That’s why instinct takes over in autumn, and squirrels enter their manic mode, rushing around gathering as much food as they will need to last them through the frosty months. Contrary to popular myth, squirrels don’t hibernate through winter, though they do take some exceedingly long naps.

How Deep Do Squirrels Bury Their Nuts?

Gray squirrels particular approach to food is called “scatter hoarding”. Squirrels will bury their nuts where the frost can’t reach them, normally at least an inch beneath the surface. They’ll usually keep their food hoards close to their den but will sometimes venture much further afield in a bid to throw potential thieves, like fellow squirrels or sly birds, off the trail. Think of this as the rodent equivalent of Walter White burying his barrels of money out in the New Mexico desert in “Breaking Bad”.

And like Walter White, there are many things you could accuse squirrels of, but stupidity isn’t one of them. Travelling further afield isn’t the only trick they pull to foil their enemies. There’s also the rather remarkable phenomenon of “deceptive caching”, where a squirrel which fears it is being watched will pretend to dig a hole and drop an acorn or nut in. In fact, it will conceal the nut it in its mouth, filling in an empty hole as a decoy to distract and delay its competitor. By the time the would be thief has realized he’s been tricked, the wily squirrel will be far away, patting down the real burial ground.

In fact, expert observers even believe that squirrels have learned how to calculate risk. If the food they want to hoard is particularly valuable, nutritionally speaking, they may risk burying their stashes in areas frequented by predators. The calculation appears to be that while they may face a small risk in hiding food in such a danger zone, there would be a much greater risk to a thief squirrel who wouldn’t know where to start digging and would be vulnerable for much longer. 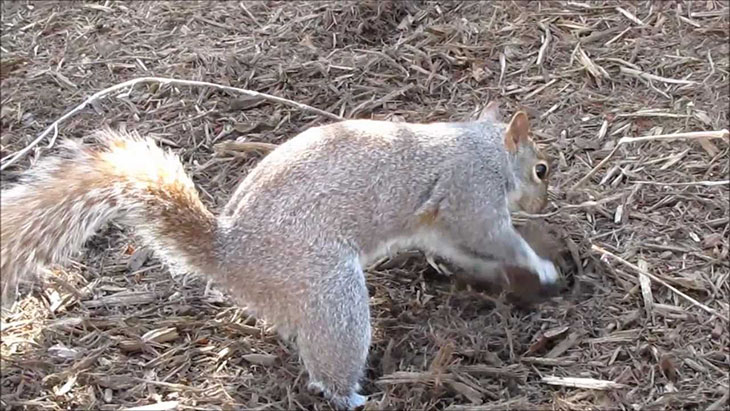 How Do They Remember Where They Buried Their Food?

You might be saying “that’s all very well, but it doesn’t help much if the stupid squirrels can’t find their nuts afterwards”. And you’d be right if it was true, but since a 1990 study by Lucia F Jacobs and Emily R Lyman of Princeton University’s Biology Department we no longer have any excuse for thinking that. They carried out a controlled experiment with gray squirrels and found that even if they were made to wait 12 days after they had buried their food, they could find at least two thirds of their own nuts.

How do they perform this impressive feat of memory? The study argues that it’s a mnemonic technique called "spatial chunking" which guides them when hiding their nuts, often sorted by size, type and nutritional value. When they get hungry and need to recover their stash, this organizing technique will guide them to the nuts they need… most of the time. And even if they don’t find all their nuts, they will usually find enough rivals’ stashes to mean they eat at least 90% as many nuts as they hid.

But what about that 10% which are lost to the squirrels forever? Well, that’s where the squirrels unwittingly become environmental heroes, and their loss becomes nature’s gain. The seeds they lose are, for obvious reasons, often the ones they have carried furthest away, which means that when the soil finally thaws they stand a chance of germinating and becoming a new tree with a chance to survive and thrive on its own ground.

In this way, the squirrel’s role is very important to the survival of many tree species, especially those that produce heavy seeds which are unlikely to sprout when they fall too close to their colossal parent tree. It is the squirrelling away that allows these trees to propogate, Chestnut trees are particularly reliant on squirrels, but pine, beech, hazel and oak trees also owe them a debt.

So next time you see a squirrel burying nuts, try not to think of it as a figure of fun, let alone a pest – think of it as a bushy tailed activist quietly and quirkily doing its bit to keep our planet breathable, a Greta Thunberg of the animal kingdom.