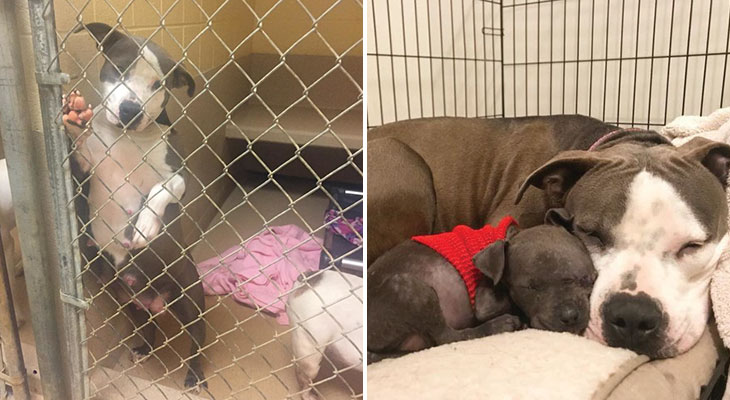 After Losing All Her Babies, This Heartbroken Pitbull Found Purpose Again After Adopting An Orphaned Puppy

Pregnant with nine puppies, Daya the dog was picked up by animal control officers after she was found wandering the streets alone.

The shelter was overcrowded, and Daya was at risk of being euthanized. She was handed over to the loving arms of a local rescue group, Halfway There Rescue, who could foster her while she delivered her puppies. Her rescuers brought her to the vet for a checkup — where tragically, an X-ray showed that all of her puppies had died in utero and were in the process of being reabsorbed into her body.

This had caused a severe infection in her uterus that required emergency surgery within an hour of her arrival at the vet hospital.

The surgery saved Daya’s life, however it was apparent that she wasn’t handling the loss of her unborn puppies well.

After surgery, she was so confused as to why she didn’t have any babies that she started mothering socks and toys. She was just following her instincts but she had nowhere to direct her energy. Just days after Daya’s surgery, the rescue got a call about a puppy who had been abandoned on the side of the road. She had parasites and skin infections and had just gotten out of surgery to remove one of her eyes, which had completely ruptured.

The shelter took the puppy in and named her Raisin.

Everyone knew that the puppy could survive with human intervention alone, but we had hopes that she could have the mama she was missing,

Within hours of meeting, Daya and young Raisin were inseparable. They had bonded so strongly they wouldn’t leave each other’s sides. Since the day they met,Daya and Raisin haven’t strayed very far from one another. From snuggling up for a nap to hanging out in the sun, they’re continuing to heal from their surgeries together and they’ll remain safe in the care of this loving rescue group until they find their forever home!