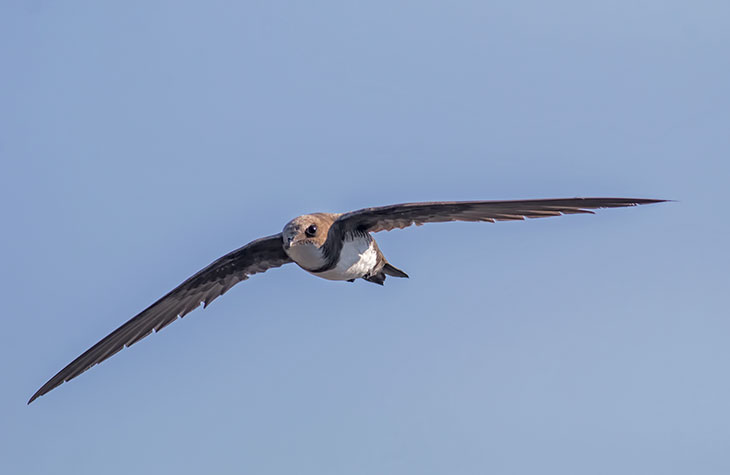 The Alpine Swift is a remarkable bird that is best known for its incredible ability to fly for ten months without ever having to land. Below is more about the Alpine Swift and how it’s perform this remarkable feat.

How Long Can an Alpine Swift Fly Without Landing?

An Alpine Swift can fly without landing for an impressive six to ten months. This long flight is usually done during the bird’s migration to Sub-Saharan Africa in the winter and when it flies back to its homeland of Europe and Asia. The only time an Alpine Swift is believed to land during their long flight is if there is violent weather which can hinder their ability to fly safely. Bad weather is one of the main predators of Alpine Swifts as it can cause them to lose control of their flying which can sometimes end up being deadly.

How Does an Alpine Swift Fly Without Landing for so Long?

While it’s not quite known how an Alpine Swift can fly for so long without landing, many scientists suspect that it could be due to this bird’s diet which is mainly insects.
In addition to this, Alpine Swifts don’t use much energy when flying. Rather than flapping their wings endlessly, they use air currents to glide through the air, something which also helps them to reach their destination faster. It is believed that Alpine Swifts can fly up to 621 miles per day.

Where Does the Alpine Swift Live?

This bird mainly lives in southern Europe and in parts of Asia, but can also be found in Africa during its winter migration. In addition to this, it sometimes can be seen flying around the United Kingdom, especially over the Isle of Man. However, this bird tends to fly south to Africa, so it’s more likely to be seen gliding over countries such as Italy and Portugal.

What Do Alpine Swifts Eat? Do They Eat in the Air?

Alpine Swifts do eat their meals in the air. These meals consist of things such as insects, seeds, and bacteria that float through the air. While most birds need large amounts of water to survive, Alpine Swifts stay hydrated with the help of the food they munch on during their airborne journey. To get water, Alpine Swifts will also sometimes dip down to a body of water, open their mouth to take a gulp of it, and then lift their head back to swallow. They are able to do all of this without ever having to land.

Do Alpine Swifts Sleep While Flying? Do They Sleep on Their Wings?

Alpine Swifts do sleep when flying and rest on their wings when they are sleepy. If this bird decides to land to sleep, they will usually find a place on a wall. The amount of time an Alpine Swift needs to sleep will vary with some periods lasting two minutes and others a few hours. This process is known as “sleeping on the wing”.

Alpine Swifts will sleep at various times during their flight, especially at night. However, they tend to take power naps throughout the day, especially when they reach a strong air current that allows them to float through the air so they can rest.

This bird also notices when food is scarce, and when it does, it will take more naps throughout the day to help conserve energy. In fact, it can go without food for up to five days by doing so.

How Long Do Alpine Swifts Live For?

On average, these birds can live for about 10 years. However, there have been Alpine Swifts who have lived for as long as 20 years.

Other Interesting Facts About Alpine Swifts

In addition to these facts, there are plenty of other interesting aspects about Alpine Swifts that might surprise you.
• Because they spend most of their life flying, they have somewhat short legs which they use to secure themselves to objects when they rest. Since their legs aren’t very strong, they can be easy prey for predators when they land.
• They can fly up to 13,000-feet in the air which can make it difficult for humans to see them when they are flying overhead.
• The Alpine Swift is believed to be one of the fastest flying birds and can reach speeds of up to 105 miles-per-hour.
• Some of this bird’s favorite snacks are dragonflies, wasps, and flies.
• Alpine Swifts are known for their piercing shrill which they use to communicate with other birds. This helps them to stay with their group and navigate through tricky areas.
• The months that they aren’t flying are usually spent laying eggs and raising their chicks.
• They have a wingspan of 7 ½-feet and weigh less than one pound.
• Alpine Swifts will sometimes mingle with other species, like swallows, when flying.
• This bird is known for having deep black feathers on the top of it and white ones on its stomach. Their tail is forked – a design that aids them during their flight as it helps them to catch speed.
Is There a Bird That Never Stops Flying? What Other Birds Stay in the Air for Lengthy Periods of Time?
Alpine Swifts are one of the only bird species that is able to never stop flying for long periods of time. However, there are a few others that are able to fly for lengthy amounts of time as well. A handful of frigatebirds can fly for around two months without having to land. The Gray-Headed Albatross is also believed to be able to travel over 10,000 miles before it needs to land.

Alpine Swifts are unique birds that can fly for over six months without having to touch the ground. Everything they need is found in the air and they are even able to sleep comfortably when flying. While other birds might be able to fly for long periods of time, not many can reach the impressive records set by the Alpine Swift.

What's The Longest A Bird Can Fly Without Landing?The Lyrebird Can Perfectly Mimic Almost Any Sound Including Human…