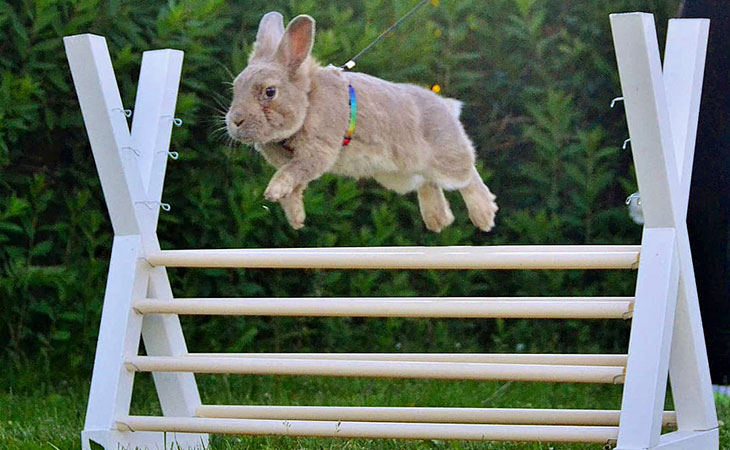 Pet shows are a popular event for animal lovers to attend and for pet owners to showcase their beloved animals. Numerous species are shown at these competitions and range from dogs to guinea pigs. However, rabbits have begun to steal the focus of the shows thanks to a fun event called Kaninhop, aka rabbit show jumping.

What is Rabbit Show Jumping?

Rabbit show jumping is a unique type of agility course for rabbits. This competition is popular in Europe and the United States and is designed to let rabbit owners show off the athleticism of their animals. The layout of the obstacles is designed to mimic that of a horse jumping course.

This competition first began in the 1970s in Sweden as locals would gather with their rabbits and guide them around a course encouraging them to jump over hurdles. Eventually, this grew in popularity throughout the country and the first major competition in rabbit show jumping was held in Stockholm. Numerous other European countries joined the contest, and in 2001, it expanded to the United States. Today, rabbit show jumping is still growing around the world with Australia and New Zealand being some of the newest countries to take part in it.

As mentioned above, rabbit show jumping takes place in a variety of areas around the world. While it is wildly popular in Scandinavia, those interested in attending or participating in rabbit show jumping will often find a few competitions close to where they are. You can do this by looking at local rabbit show jumping chapter websites which often tell of where future competitions will be held. In Europe, some of the most recent contests were held in Switzerland. In the United States, numerous competitions are held around the country at pet shows, including the Greater Philadelphia Pet Show and Long Island Pet Show.

What Obstacles Are in the Contest?

There are numerous obstacles that rabbits must jump over during the contest which are placed at various areas on the ground. The obstacles mainly consist of a few plastic bars that are secured into two poles. The height of these obstacles will usually increase toward the end of the course to fully show the rabbit’s agility. However, most rabbit show jumping rules state that these obstacles must not exceed a height of 24 inches.

Along the way, there might also be a few other obstacles for rabbits to conquer. These include jumping through hoops and walking up and down ramps.

How is the Show Judged?

Rabbit show jumping has very specific rules that must be followed when performing. Some guidelines that are to be adhered to are:
• The rabbit must have a tattoo on their left ear with a few letters and numbers to distinguish them from others. If they don’t, they will be disqualified.
• Rabbits must wear a harness and have a leash attached when jumping.
• A handler is not allowed to move the rabbit in a position the rabbit is not naturally in so as to help them jump better. This is called a correction and is considered a major fault.
• The rabbit must get along with other rabbits and people. If the animal bites or acts viciously toward others, they will be disqualified.

During the competition, judges will carefully watch the rabbits performing. If the rabbit ends up knocking over a pole or is unable to jump the required amount, points will be deducted. All of these faults will be calculated at the end and if they exceed seven, the rabbit will not be able to continue in the competition. At the end of the show, the best of three in the contest will perform. The rabbit with the least amount of faults after the last round wins.

How Do You Train a Rabbit to Jump?

It might seem like training a rabbit to jump would be difficult, but it’s not. Rabbits are natural jumpers, but training them to do an obstacle course will often take time and patience.

To train a rabbit to jump, you first want to create a simple course for them to try. This course should be very simple and only contain small jumps, such as one rail. You should make sure that beneath the course there is a soft padding for your rabbit to land on so they don’t hurt themselves.
To get your rabbit to jump, hold a small piece of their favorite food in front of them. Then, gradually lead them to an obstacle and move your hand with the food over it. They will eventually understand that once they jump over the obstacle they will receive a snack.

With a Target Stick and Clicker

Another method for training a rabbit to jump is with a target stick and clicker. This small stick should be placed in front of your rabbit so it captures their attention. You want to then gently move the stick around in front of them. When they start to follow the stick in the different directions you move it, click the clicker and give them a treat. As your rabbit starts to gain interest in the stick, start moving it toward a small obstacle. You want to use the stick to encourage them to jump over it. When they do, click the clicker again and give them a treat. Eventually, your rabbit will learn how to jump over the obstacles and you will no longer have to use the stick and clicker to train them.

How High Can a Rabbit Jump?

How high a rabbit can jump depends on their breed as some are a little more athletic than others, like mini satins, harlequins, and cinnamons. However, on average, most rabbits can jump about two-feet high vertically and 15-feet high horizontally.

Rabbit show jumping has been quickly gaining popularity around the world. It allows rabbit owners to showcase their pet’s agility and earn some fun prizes along the way. Teaching a rabbit to jump obstacles is not only easy, but is something most of them enjoy doing.