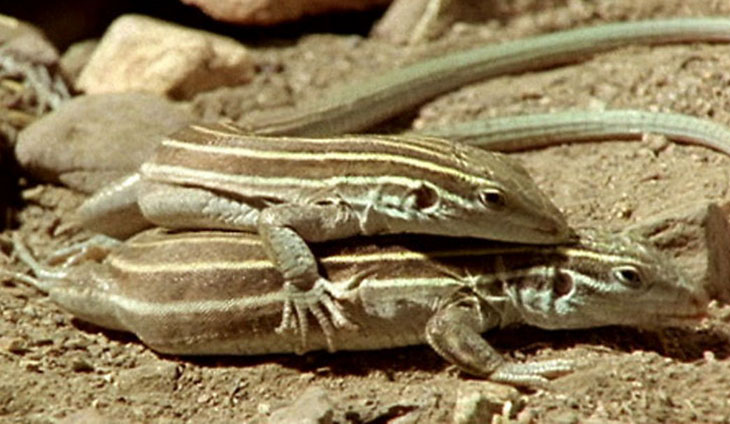 Mexico is famous for many things, including mariachi, margaritas and machismo. Maybe it’s this machismo which explains why it doesn’t boast quite so much about one its most remarkable inhabitants, a particular and unique species of whiptail lizard. One commonly known as the leaping lesbian lizard.

Yes, you read that right. They’re called leaping lesbian lizards and it’s totally accurate. They really do leap. And they really are lesbians.

While many animals are known to exhibit lesbian behavior, they rarely do so exclusively. In some populations of Japanese macaque monkeys, females spend most of the winter mating season in feverish couplings with each other, while the males wait around idly. They don’t just wait and watch out of voyeurism, though. They know that a female will eventually seek them out for a tryst, requiring their sperm for reproductive purposes, and seem content to be so obviously used.

More loving lesbian relationships can be found among Laysan Albatrosses, a species native to Hawaii. These giant birds have been known for decades to “marry for life” but it’s only become clear more recently that a third of couples are female, and will even raise chicks together. However, even these lady lovers can’t escape the need for male DNA and in order to fertilize their eggs at least one female needs to break away at some point for a clandestine rendezvous with a male.

The leaping lesbian lizard is different for two reasons. Firstly, they don’t need to sneak off for a bit of male on female action in order to fertilize their eggs, because they’ve successfully learned to reproduce without a need for any partner (more on that in a moment).

Secondly, they couldn’t mate with a male even if they wanted to, since there aren’t any.

Why are there no male whiptail lizards?

Most experts believe that these lizards came about through a rare successful cross-breeding between the Little Striped Whiptail and the Western Whiptail.

As so often with a hybrid pairing, the result was sterile males, which should have meant an evolutionary dead end. But the leaping lesbian lizards evolved in a surprising new direction, one which left the males redundant and soon wiped out of history by ever-merciless Darwinism. So just how did these resourceful females keep going?

This is where things get technical. You may take notes. In standard-issue sexual reproduction, sperm and egg cells are created through a process called meiosis, where a cell’s DNA-containing chromosomes are divided so that the results are cells containing only half as many chromosomes as normal cells. It’s only when a sperm and egg unite that the full set of chromosomes is restored and can be passed on to a new generation.

As students of Darwin will know, there’s a very good reason for this complex and continuous reshuffling of genetic material. It means that genetic flaws such as disease can “die out” over time, and allows space for mutations which actually improve an animal’s evolutionary fitness to continue.

How do lesbian lizards reproduce?

Surprisingly simply: they produce twice as many chromosomes in their reproductive cells before cell division begins. This means that the resulting eggs have the right number of chromosomes for a new – and necessarily always female – lizard to be born.

This is a form of cloning, but in fact leaping lizards maintain some genetic diversity, so essential to evolutionary survival, through that double chromosome trick. By a process scientists don’t yet fully understand, they slightly reshuffle their genetic pack of cards with each new offspring so that they aren’t genetically identical. This is why these species now thrive all the way up from Mexico to the southern states of the US.

This form of reproduction is sometimes called asexual reproduction or parthenogenesis, and whiptail lizards aren’t the only creatures capable of it, as “Jurassic Park” fans may remember. In fact more than 80 types of amphibian, reptile and fish have been known to reproduce asexually, including the rather famous Komodo Dragons and Hammerhead Sharks. But if the idea of rapidly cloning armies of man-eating Komodos and Hammerheads fills you with terror, don’t worry – these species only resort to parthenogenesis when males aren’t available, and usually follow the more time-consuming and energy-draining rituals of male to female courtship and mating.

Some readers may be wondering why the lizards are called lesbians. If they are able to reproduce all by themselves, do they actually need sex at all? Isn’t there a reason why this is called asexual reproduction? Well, this is where things get really interesting. Even though they don’t technically need sex to survive or thrive, the females still display classic courting and mating behaviour and mount each other regularly, switching fluidly between sexual dominance and submission according to hormonal variations. It’s like a reptile Miley Cyrus video.

We can hope for the lizard’s sake that the main reason they do this is for the fun of it, but it also appears to serve a biological purpose. Studies of the lizards’ mating rituals – and, yes, studying lesbian lizards is a real job – have proven that females who are mounted by another female are more likely to lay eggs than those who pursue solitary pursuits, presumably because the sexual stimulation promotes ovulation.

Apart from making them one of the more fascinating creatures on the planet, the lesbian lizards do gain one major survival advantage from their ability to reproduce without the need for a partner. It makes them extraordinary colonisers of inhospitable environments such as the more arid areas of Mexico, New Mexico and Arizona where they are now so successfully established.
Most species trying to populate a new and hostile geographical area require at least one sexually viable male and female to survive in order to reproduce. The leaping lizards only need one tough female to make it, who can then get on with the business of repopulation all by herself. In fact, if other animals were able to do this, there would have been a lot more room on Noah’s ark, with no need for that whole “two by two” rigmarole.

In Jurassic Park, Jeff Goldblum’s scientist famously says of the possibility of parthenogenesis “life finds a way.” These lizards are just one example proving that not only is this true, but that life is often at its most fascinating when it is forced to get inventive. Long live the leaping lesbian lizards!