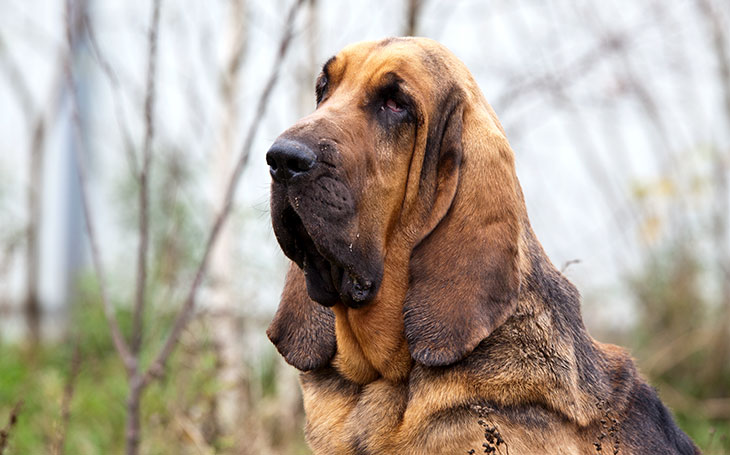 The History of the Bloodhound

Documentation of the bloodhound breed goes back to around the third century A.D. It is believed to be descended from the hounds that were kept in Belgium at the Abbey of Saint-Hubert, but the breed as people are familiar with it was honed as a breed in Great Britain.

These large dogs were originally bred to follow hunted animals, such as wounded deer and other large prey, following their blood scent, which is how the breed got its name. As the deer population in Great Britain decreased, hunters began to focus on hunting foxes, so the faster Foxhound became more commonly used. Around that time, bloodhounds began to be used as they are now — for tracking people.

Bloodhounds are generally a gentle and laidback dog breed. They can be stubborn and even headstrong, so training takes time. They can make wonderful family pets, but they are sensitive and need a confident owner.

Are Bloodhounds the Best Tracking Dogs?

While just about every dog has a great sense of smell, bloodhounds have been honed to be masterful trackers. Even their wrinkles are designed to help them track better. Their hallmark long, droopy ears and folds of skin help them "scoop" up a scent and allow them to follow it.

Their nostrils are large, and they have long slits on the sides of their nose, which gives them more time to smell a scent. Their nostril design allows around 40 seconds of exposure to a given scent, and their nostrils can be moved independently of each other, so they have an easier time pinpointing where a given scent comes from.

Can Bloodhounds Smell Better Than Other Dogs?

If dogs traditionally have a great sense of smell, you’re probably wondering if bloodhounds can actually smell better than other dogs. In fact, they can!

What Other Breeds Have a Great Sense of Smell?

Other scent hounds also have great senses of smell, which includes breeds such as the beagle and coonhound. That said, the German shepherd has the second best nose in the dog world. They have around 225 million scent receptors in their nose, which is still far less when you compare that nose to a bloodhound’s.

German shepherds are often used more commonly than bloodhounds because they have a highly developed sense of smell and can apply it to more than just tracking. They can also use their nose to detect bombs and drugs, which bloodhounds can but won’t often respond to because they prefer to track. German shepherds are often highly trainable and more outgoing and aggressive, making them good protection and working dogs.

What Do Police Use Bloodhounds For?

Police most commonly use bloodhounds for tracking. With the right training, these dogs can sniff out a person, following a trail for miles. They tend to prefer tracking over detecting stationary scents, which is why they aren’t commonly used for bomb detection or sniffing out drugs, which makes the German shepherd a more common "dual purpose" breed.

Depending on your area of the world, you might see bloodhounds as part of the police department. Oftentimes, they are more commonly used by search and rescue teams or other organizations which focus almost solely on searching for people.

How Can a Bloodhound Find You By Your Scent?

Humans shed skin rafts, which are pieces of skin cells, bacterial and fungal populations that live on our skin, fragrances, and hormones. Humans shed thousands of these at any given time, and some are light and float on the air, while others are heavy and fall down to the ground.

When a bloodhound is searching for a person, the officer or handler has to have an object of the person that contains their scent, giving the dog an idea of who they are looking for. Typically a scent pad is used to collect the scent and place it near the bloodhound’s nasal passages, where the dog creates an "odor image" or smell recognition.

The bloodhound will begin sniffing the area to find the scent, scooping up skin rafts and scent molecules to help them identify the person’s location. Their body is designed to help them follow the scent, with their wrinkles and droopy ears sweeping scents toward their nose. They will smell back and forth to help find the trail.

How Far Can Bloodhounds Smell?

Some bloodhounds can smell underwater. Unfortunately, water can wash away scent molecules, so it is much harder on the dog to track scents underwater. Instead, they usually track along the shoreline, and you may see a bloodhound pace back and forth, narrowing a trail down to the area where the person entered the water.

Can a Bloodhound Track a Person in a Car?

This is highly debated. It does not appear dogs can sniff while traveling down the road, but they can detect scents of going to and from cars. If there are openings in the car, it may release smell rafts, allowing bloodhounds to detect scents.

While bloodhounds may seem like laidback, lazy dogs, the truth is that they are hardworking sniffers and make excellent tracking dogs with the right training. They have a superior nose, allowing them to detect scents for miles and days old. While they are not used as commonly as breeds such as the German shepherd, they are no less important and could save your life one day.