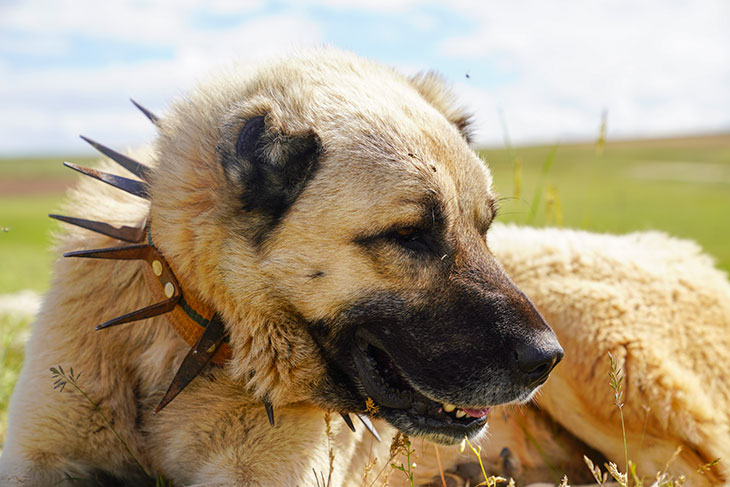 The Kangal dog is a large dog with a heavy bone structure. Its size has developed as a result of its use as a working dog, particularly in Turkey. The dog tends to be longer than it is tall, with a typically curved tail.

The Kangal dog has a short, dense double-coat that serves several purposes. First of all, it is thick enough to protect these dogs from predator bites, such as when they fight with a wolf. Kangal dogs have a reputation as wolf killers, and they’re certainly capable of such as reputation.

(Related: Which Animal Has The Strongest Bite?)

In addition to having an incredible bite force, Kangal dogs are fast dogs. They can run up to 30 miles per hour (or 50 kilometers per hour).

Kangal dogs are very large breed dogs, getting to be up to about 130 pounds. Typically dogs that large have short life spans, but the Kangal can actually live up to around 15 years of age.
Kangal dogs are generally rather intelligent pups. They learn to guard cattle and other livestock, often learning from their parents when they are about 2 years old. They typically work in pairs or small groups to patrol the herd and keep them safe. 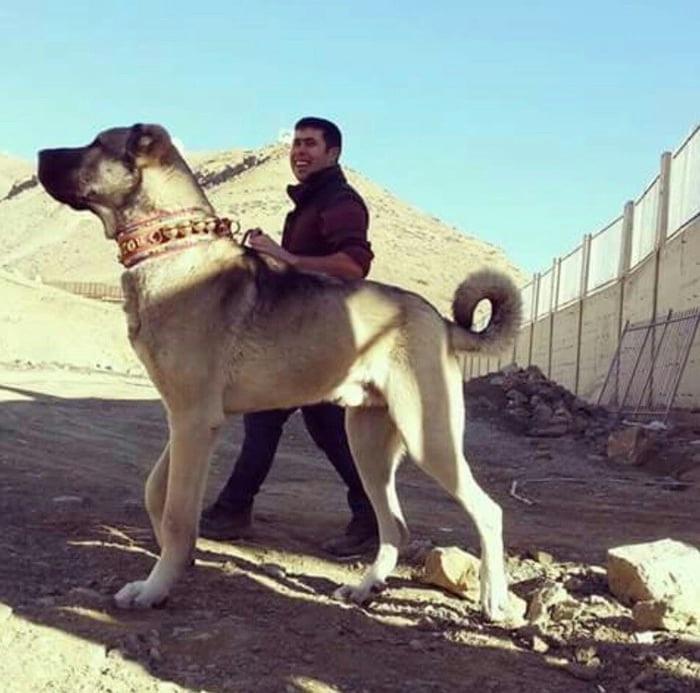 The Kangal dog breed was largely developed in Turkey. It is an ancient flock-guarded dog breed that may be related to the dogs pictured in Assyrian art. The dogs likely originated in the Kangal District of Sivas Province in the central area of Turkey, and that is what this dog breed has been named for.

The dogs have been associated with a family of large landholders, the Aga of Kangal, but villagers have long bred the dogs as well and may be the primary breeders of the Kangal dogs. They use them to protect their flocks of sheep and goats from predators such as wolves.

The Kangal dog is considered the national dog of Turkey, even with its regional origin. The dogs are carefully bred with pedigrees maintained, which has produced a rather uniform dog in appearance and behavior. The dogs have even been featured on stamps and coins.

The Kangal dog came to America through David and Judith Nelson who were studying the dogs while they lived in Turkey. They imported their first dog in 1985. Turkey has carefully regulated the export of Kangal dogs since, maintaining the purity of the bloodlines.

In Africa, the Kangal dog has also been used to help protect and conserve cheetahs. Farmers were killing cheetahs that were threatening their livestock in areas such as Namibia and South Africa. The Cheetah Conservation Fund instead gave farmers 500 Kangal dogs to train. These dogs are used to protect the livestock flocks and herds from cheetahs, meaning that fewer cheetahs are killed.

Why do Kangals wear spiked collars?

In Turkey, many Kangal dogs wear spiked collars. These were invented in ancient Greece and are designed to help protect the dogs’ throats from their ultimate enemy — the wolf. Wolves are common threats to the flocks that Kangal dogs protect. They typically fend them off by rolling their shoulder and knocking the wolf down, before going for their hind legs or throats. 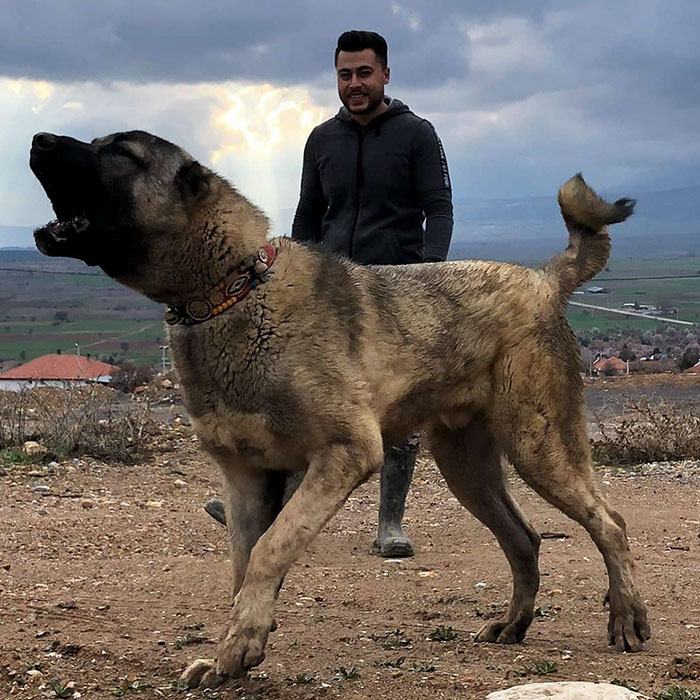 Kangal dogs need plenty of room to be exercised. They don’t do well in apartments because they tend to be inactive when indoors. The best environment for them is a large yard or significant acreage. Unfortunately the Kangal dog does not recognize property boundaries and will wander, so owners need to have appropriate fencing for the dogs.

Kangal dogs need mental stimulation. As working dogs, they will patrol their property while protecting livestock. Dogs that are kept with a family rather than as working dogs need mental stimulation or they will become harder to handle. Regular walks or runs, as well as socialization off their property, are important to keep them fit and stimulated.

The temperament of a Kangal dog is similar to that of other livestock guarding dogs: territorial and defensive of its human family and the animals under its watch. While they prefer to intimidate predators and strangers, they will take a physical stand and attack as necessary. As with other dogs, the Kangal dog considers its humans as part of its pack. The main goal of training is to establish dominance over your Kangal dog to ensure that it responds to the direction of humans.

Kangal dogs develop slowly. They are typically around two years old when they start to learn guardianship behaviors. In their early years, they tend to be clumsy, a feature which many find adorable. They tend to be chewers and diggers. Fences need to be tall and extend into the ground to ensure that your Kangal cannot dig its way out of its enclosure.

While historically the Kangal dogs were fed scraps from the villagers they patrolled around, including goat’s milk and bread, this was not a balanced diet. The easiest way to feed your Kangal dog is to feed a high-quality commercial dog food that has been specifically formulated for large, active dog breeds. In the United States, you should look for an AAFCO statement on the bag that it is complete and balanced.

Other people may choose to feed raw food diets to their Kangal dogs. While the dogs can thrive on this type of diet, there are several reasons to be careful with it. First, pathogenic bacteria are more likely to be present when feeding a raw diet, which can get the dog and humans involved sick. Feeding bones can also break teeth and lead to gastrointestinal obstructions. Feeding a balanced diet if you elect to feed a raw diet is also important.

Is a Kangal a good family dog?

The Kangal dog is a relatively protective dog breed, and they tend to be people oriented when compared to other livestock guardian breeds. When well socialized, these dogs are not generally aggressive towards people but may be to intruders, particularly at night. These dogs tend to love children and interact gently with them. They have been bred to be gentle with their families, so aggression is not typically present in the breed.

Are Kangal dogs legal in the US?

Kangal dogs are legal in the United States. They are a relatively rare breed in the U.S., however, due to the restrictions on importing them that have been made by Turkey.

Kangal dogs have been bred to be safe with families, and they typically love children. They will become protective over their families and livestock, often dealing with threats first by barking or growling, before moving on to behaviors such as biting.

Do Kangals get along with dogs?

Kangal dogs may be aggressive towards other dogs, particularly stray or wandering dogs that they are not familiar with. That said, they typically do best patrolling flocks of livestock in small groups of two to three dogs, This provides them with much of the socialization they need.

Kangal dogs need a lot of exercise, and they are also prone to barking. These pets need to have a "job" in order to thrive, which typically means they need a herd of livestock to patrol and protect.

When it comes to actually caring for these dogs, they are relatively low maintenance. They shed one to two times per year and need to be brushed out regularly when they are shedding. Beyond that, they need very little grooming to maintain their thick coats.

Are Kangals a Good Pet?

Kangal dogs can make good pets, but they really need a "job" in order to thrive. These dogs are typically loyal to their family but may be untrusting of strangers. They typically do well with families with children, but they may need more exercise than a family can provide on a small property. Regardless of what type of property you have, these dogs should have a tall fence to keep them contained.

Kangal dogs are an ancient dog breed that are very good at their jobs. They are impressively large and feature the strongest bite force of any dog breed, but that doesn’t mean they’re aggressive. In fact, these dogs make great family members as long as they are kept mentally stimulated, generally adoring the children in the family and protecting livestock flocks from danger.

Everything You Wanted To Know About The Bully Kutta Dog BreedEverything You Wanted To Know About The Molossus Dog BreedThe Most Decorated War Dog of World War 2Rottweiler vs Cane Corso: Which is the Better Guard Dog?Is It Cruel To Dock Your Dog's Tail?Should A First Time Dog Owner Get A Pit Bull?Why You Shouldn't Take Your Pit Bull To The Dog ParkWhy Do Dog Breeds Become Extinct?Loyal Dog Reunited With Owner After Waiting Outside The Hospital For A…