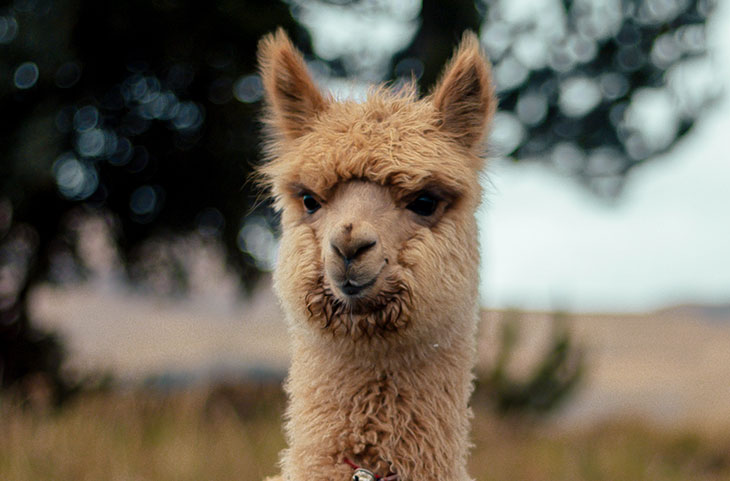 When most people think of llamas they visualize curious and friendly creatures that have distinctive personalities. In addition to their fun disposition, they have an interesting way to help protect themselves from those who they feel threatened by. Llamas will spit when they feel they need to guard themselves, but how they do so is unique. Below you’ll discover more about why llamas spit and some other fun facts about it.

Why Do Llamas Spit?

Llamas mainly spit when they feel threatened or in distress. However, they will also sometimes spit at each other when in competition for food or trying to assert their dominance over another. In addition to this, females will spit at males they don’t want to mate with to show their disinterest.

Most humans don’t need to worry about a llama spitting at them (unless they are intimidating the animals) because a majority of llamas usually spit at each other. Despite this, humans need to be careful when around these animals to ensure they aren’t unintentionally causing them anxiety or stress.

While they are related to camels, llamas don’t spit like them and they do so for different reasons compared to camels. For example, camels will spit at people when they are annoyed with them, not just when they are in extreme distress. Some camels might also spit at others just to surprise or distract them. Because of this, camels are considered to be more temperamental compared to llamas.

Unlike llamas, camels don’t tend to give you a warning as to when they are about to spit. To spit, camels will quickly fill their cheeks with saliva and fling it at you before you realize what is happening. Camels tend to have very powerful airways which allows them to push the spit out at a rapid speed which could cause the object of their annoyance to have a bit of pain when the spit hits them.

What is Llama Spit Made Of?

Llama spit is filled with their stomach’s gastric juice. For some llamas, their spit will mainly be composed of their saliva with just a hint of gastric juice. How much they spit depends on the llama and how threatened they feel.

Llama have three compartments in their stomach where the juice is held. They will regurgitate liquid from one compartment (the area with the okay-tasting gastric juice) and use that first before they use the gastric liquid from the other compartments which tends to have a very strong and unpleasant taste compared to the first one.

The animal will chew its food multiple times and often vomit it back up when doing so. You can sometimes see them doing this thanks to a lump in their throat that is evident when they chew. Because of this chewing process, their spit doesn’t contain large chunks of food but is completely liquefied.

While it’s not fatal if you are spit on, llama spit can be dangerous if not removed quickly. This is because the spit is mainly vomit which contains contents from their stomach that could have bacteria in it. If the llama is unhealthy, that spit could also contain parasites and diseases in it which could cause the person or animal it spits on to get sick.

However, llama spit is mainly just unpleasant to deal with and most don’t need to worry about it being deadly. If llama spit does land on you it’s best to remove the clothing it’s on and wash the piece off as soon as possible.

Llama spit has a strong aroma that is similar to sauerkraut. However, the strength of this smell will vary depending on the animal itself. Another factor that determines what the spit smells like is the last meal they ate, which is usually some type of grain or grass. When they spit, the gastric juice will have a greenish tint to it.

How Much Do Llamas Spit?

Llamas don’t spit often, only when they feel truly threatened. Llamas might spit to protect themselves but this act is usually a last resort for them as the spit leaves an unpleasant taste in their mouth. In fact, after spitting, an llama will sometimes stand with its mouth hanging open as a way to air it out. Some might even try to quickly find food to eat to help remove the taste from their mouth. Because of this, most people don’t usually have to worry about being spit on by an llama unless they are doing something to cause terror to the animal.

How Can You Tell When an Llama is Going to Spit?

Thankfully, this animal gives you a few warnings before it spits at you. If you see the animal pulling their ears back while staring intently at you, it’s best to get away quickly. You might also hear them making snorting noises while doing so. A few might also puff air at you while extending their neck up as a strong warning to back off. If you start to see these signs, make sure you’re at least 10-feet away from the llama as their spit can travel pretty far.

If you see an llama acting as if they are about to spit, there is one way you can try to prevent them from doing so. This includes not making eye contact with them and acting non-threatening. By doing so, it can calm the animal down and prevent a nasty experience.

Llamas are friendly creatures but they do have methods of self-defense they will use in times of need, such as spitting. While the spit isn’t pleasant for the llamas it’s one of the best ways for them to tell others to leave them alone.

Why Are Bloodhounds Such Good Tracking Dogs?Sexual Cannibalism: Why Do Some Animals Eat Each Other After Mating?Why Are Pigs Pink?Why Are Hippos So Aggressive?Why Are Honey Badgers So Hard To Kill?Why Was The Beefalo Created?