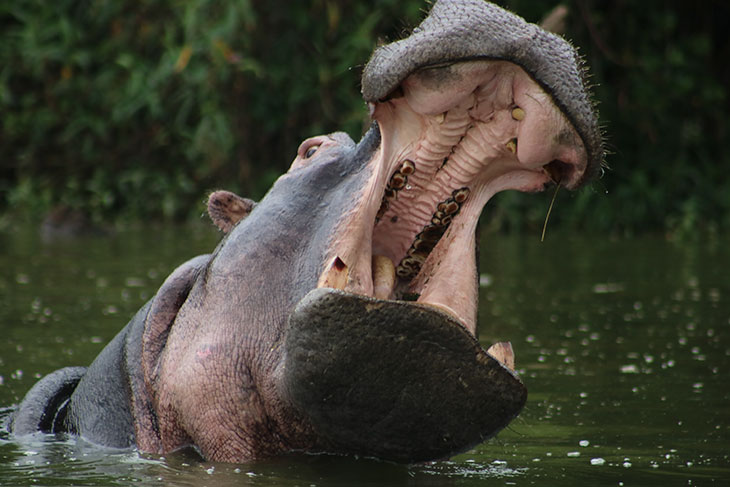 If you’ve ever been to a gift shop and perused the aisles of stuffed animals, you have probably seen a cute and cuddly hippo toy, ready for the next child to gush over and want to take home. And it is no surprise that plush hippo animal toys are so popular. If you’ve ever seen a hippo in captivity, you’ve probably been in awe over how cute these animals can be. But in reality, hippos are extremely dangerous animals. In fact, the hippo is commonly known as one of the dangerous seven amongst African tour guides, with the hippopotamus being grouped with the cape buffalo, elephant, lion, leopard, rhinoceros, and crocodile.

Why is the hippo so dangerous?

Though it might not look this way, hippos are extremely fast and aggressive animals. Not only that, but they are unpredictable and quite stealth as well. And because so many people view hippos as these cute and cuddly giants, it often means people aren’t as careful when they are around the animals, and get closer than they should. This results in the natural reaction by the animal to want to protect itself.

Many tourists often mistake the yawn of the hippo to be nothing more than what it is – a yawn. But indeed, the yawn is a sign that a hippo is feeling threatened. Humans that don’t know to recognize the yawn as a warning, often find themselves trying to flee a seriously dangerous situation desperately. Unfortunately, the speed in which a hippo can run (nearly 20 miles per hour) means that the large animal can easily outrun a human, with few exceptions, can’t run nearly as fast.

How deadly is the hippo?

Though the hippo appears to be ungainly with that heavy, swollen belly balanced between four short legs, the hippo is indeed one of the world’s deadliest of animals. These animals can run at speeds of 20 miles per hour or more. It is estimated that hippos kill approximately 500 people each year in Africa. And though hippos are not known to eat people, they can indeed crush a human to death.

How do hippos kill?

A hippo’s strong teeth and jaw could indeed kill a crocodile by crushing it to death, but it is far more likely that the crocodile would kill the hippo due to the firm bite of the crocodile. Occasionally, there have been news articles published about sightings of hippos and crocodiles playing together. This is rare, however, as hippos tend to play only within their species, and furthermore because crocodiles are known to harm and kill baby hippos.

This all said, crocodiles are not likely to attack a hippo unless a young hippo had wandered far away from its usually protective mother. Fully-grown hippos are extremely strong and far too powerful for a single crocodile to consider attacking. Thus, this is the reason that crocodiles are far more likely to go after a young, and alone, hippo.

On the flip side, a crocodile is not likely to approach a group of adult hippos, because as a group, the hippos will have far more strength than could ever be matched by a solitary crocodile (or even a group).

Are hippos aggressive to humans?

Hippos can be extremely aggressive, especially when they feel threatened. They use their large teeth and tusks to help ward off threats, and those threats can include humans. If a hippo feels threatened, it is well-known that the hippo can get to a human quickly, and crush them to death.

What makes hippos so much more of a threat, is that humans will often be in the area of a hippo, and not even know it. Hippos tend to hang out in the water during the day, then make their way to land in the evenings. And though hippos can’t actually swim, they can stand in the shallow water with just their ears and snouts above the water-line. For humans that don’t know what to look for, it can make it easy to entirely overlook a heard of hippos just below the water’s surface. Thus, is humans get too close, the hippo will go into a defensive behavior, which will inevitably end poorly for the humans.

Why do hippos attack humans?

Hippos are primarily herbivores, and they only feed on plants. Most of the hippo’s diet consists of short grasses and fruits, thus why if you have ever seen a hippo eating watermelon on television, you know why. And though hippos have sharp teeth that can grow to be 20 inches in length, hippos are not known to eat people, though it is not impossible.
Why are hippos so aggressive?

Hippo mothers tend to be very protective of their young, and as approximately only one in ten males ever mate, male hippos become aggressive when seeking the opportunity to mate with a nearby female. As such, the male hippos will often attack and kill, baby hippos that are taking the attention away from the female towards the adult male. Male hippos are also known to attack other male hippos as a way to fight for the attention of the female, and these fights are often to death.

Male hippos that kill baby hippos are doing this as a territorial maneuver, solely for the sake of gaining the ability to mate more quickly with the female.

Most safari and dangerous animal experts feel that hippos are aggressive as a natural reaction to threats. For decades, hippos have been hunted for their meat and their teeth. Over time, hippos have developed a very defensive response to invaders that have made their way into their territory. And since hippos tend to congregate and spend time only with others in their species, any non-hippo visitor can quickly find itself in harm’s way.

Why Can't Hippos Swim And Other Fascinating Animal Facts of the WeekHow Do Hippos Mate?Do Hippos Have Predators?Why Are Bloodhounds Such Good Tracking Dogs?Sexual Cannibalism: Why Do Some Animals Eat Each Other After Mating?Why Do Llamas Spit?Why Are Pigs Pink?Why Are Honey Badgers So Hard To Kill?Why Was The Beefalo Created?