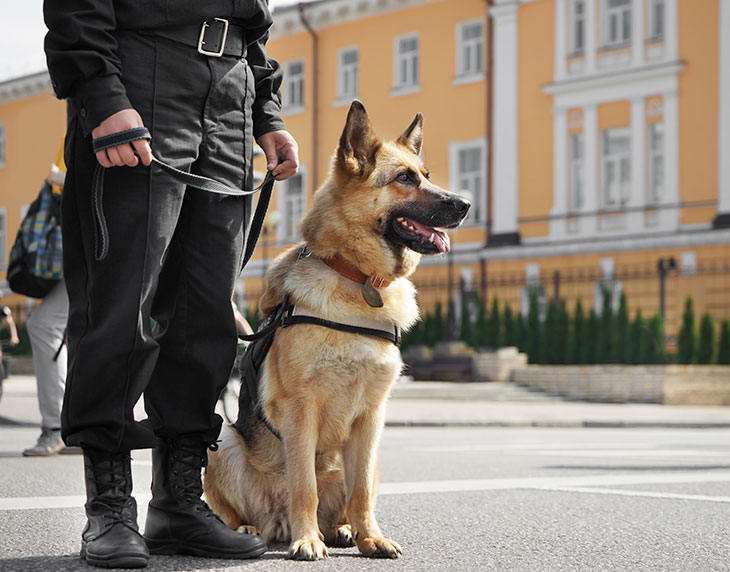 K9 dogs are rather busy critters. Depending on the dog, they can search for drugs, rescue people, and even take down criminals. These dogs are highly trained members of the police force, and only select canines make the cut. Lets learn more about these impressive dogs.

Why Are Police Dogs Called K9?

Domesticated dogs are identified in Latin as Canis lupus familiaris, and the term canine has become a shortened version of that. The term K9 or K-9 is a homophone of canine and is used to abbreviate canine. While any dog can be referred to as a K-9, it is more commonly used to refer to police dogs now.

Canine working dogs have been used since the Middle Ages. Initially bloodhounds were used to hunt down outlaws. Over time, other dog breeds have been used, including German Shepherds, Retrievers, and Belgian Malinois.

Where Do Police Dogs Come From?

Police departments get police dogs from different sources. While some may be donated or purchased locally, a major source of American police dogs is Europe. Breeders in Europe measure the potential police dogs against a core set of attributes. They breed only very specific dogs and only if they have met each of the attributes required. There are also internationally renowned police dog agencies that are responsible for training the police dogs, where they can receive an international certification. One such program is the Dutch Police Dog Association.

Unfortunately, there is significant cost associated with importing a police dog, generally thousands of dollars. The good news is that a good police dog will pay for itself over the long haul.

What Makes A Good Police Dog?

Police dogs need a strong constitution. As puppies, they investigate their surroundings and are curious. As adults, they are highly skilled animals that can operate under a range of different conditions.

Several traits are common to police dogs, including:
• Intelligent
• Obedient
• Strong and powerful
• Sociable in a variety of settings

To some extent, potential police dogs must also be aggressive. They need to have a willingness to protect civilians and take down criminals.

Police dogs generally need a strong hunting instinct, as well as a strong nose. Police dogs may be used for bomb or drug detection, hunting down criminals, or searching for missing persons, so a strong nose is incredibly important.

How Are Police Dogs Trained?

The mainstay of training a police dog is basic obedience. If the dog does not master these commands, it will not be a successful police dog and will often be removed from any program it is enrolled in. These dogs have to obey each of the commands from their handler immediately and without hesitation. While these dogs are usually inherently aggressive, their willingness to obey keeps their behavior in check with the officer or handler. It also helps the officer to control how much force a dog will use against a suspect.

Police dogs are socialized to a variety of situations, particularly city life. They must get used to cars, crowds of people, and loud noises, just to name a few circumstances. If they’re too nervous in these types of environments, they won’t make a good police dog.

Police dogs have to go through agility and endurance training. They must be able to work for long stretches of time and under different weather conditions. These aren’t your family’s Yorkie that won’t go potty outside when it’s raining. They need to be able to climb over walls and navigate stairs, all while following their handler’s commands.

While in training, police dogs may receive specialized training. Depending on what the dog is going to be used for, they may learn different skills. For example, bloodhounds are often used for tracking missing persons, so that is what they learn. Other dogs may learn to detect bombs or drugs.

Why Are Police Dogs Trained In German?

Most police dogs are trained in German or Dutch. The main reason for this is that the average layperson, especially in the United States, does not know German, so they can’t attempt to give the police dog alternative directions.

Many police dogs are trained in Schutzhund, which uses the German language. In addition, European dogs may learn German or their native language, requiring that the police officer who handles them learns key commands in the specific language.

How Long Does It Take To Train A Police Dog?

Training a police dog takes a lot of work. Initially, these dogs receive months of training, usually between eight months to over a year. Upon successful completion of this training, they are paired with a handler, and the team or K-9 unit must do even more training. They will usually train together for three to six months. Specialized training may take longer. For example, some police units learn narcotics training, which is a program that usually takes four to six weeks to complete.

Once they have learned to work together, the team doesn’t stop there. Police dogs and their handling officers must continually train together throughout their career.

Why Are Police K9 Dogs Male?

Police dogs are generally male. In one survey of police dogs in Alberta, Canada, only 15 percent were female. The main reason this is cited is that female dogs tend to have more maternal, protective instincts. While a police dog generally needs to be able to survey and explore an area while not attached to their handlers, females tend to be less willing to leave their handlers even to do their job. They tend to be less aggressive, and they may be reluctant to go out on their own to search an area or apprehend a potential suspect.

Police dogs may be spayed or neutered, or they may be left intact. In many cases, they may spend their first years as an intact dog, developing fully before they are neutered. There are mixed reasons for neutering or leaving a police dog intact. Many people feel that the dog retains more of its aggressive traits by being left intact, but it may be more prone to be driven by hormones if he or she is not altered. The specifics depend on the department, the dog, where they were obtained from, and their uses. Dogs that are adopted from shelter environments are generally neutered, while those coming from a breeder may be left intact as possible breeding stock later.

Can Pit Bulls Be Police Dogs?

Pit bulls can make excellent police dogs, and they are becoming increasingly common. The first pit bull police dog in New York was a female named Kiah who came from an abusive environment and went on to become an excellent police dog. Most people from them to be even-tempered and highly trainable. That said, Belgian Malinois and German Shepherds are still the most common dogs used as police dogs.

When police dogs bite, they tend to bite hard. They are trained to exert a large amount of force and to keep applying it, unlike a civilian dog which may bite and then immediately release. For example, consider a German Shepherd police dog. An untrained German Shepherd’s bite force is usually 200 to 400 pounds per square inch or psi. A trained German Shepherd police dog may exhibit upwards of 1,500 psi in their bite. While some studies have shown that only around 2 percent of civilian dog bites require that a person needs to be hospitalized (and those are often children), around 50 percent of police dog bites require the person to be hospitalized. It’s also important to note that these dogs are generally trained to only bite suspects, making them safer to the population at large than an untrained dog who make attack unprovoked.

When a police dog bites someone and they have to be hospitalized, the average number of bites they have is three. In contrast, when a civilian dog bites, they typically only display a single bite.

(Related: Kangal dogs have the strongest bite force of any dogs)

Depending on where they live in the world and the particulars of the department that they work for, police dogs may be considered officers. Unfortunately, they don’t have all of the same protections that a police officer would have. For example, if someone hurts or kills a police dog, they are not often punished in the same manner that they would be if they were to inflict the same trauma to an actual — read, human — police officer.

That said, in some areas, police dogs are considered officers. They receive their own badge and equipment, such as a protective vest. Regardless of the specifics, police dogs are generally treated with honors when they die, especially when in the line of duty.

Do Police Dogs Get Paid?

Police dogs do not receive pay in the same way that police officers are paid. In general, their expenses are covered, such as food and shelter. This may be from the police department or garnered through donations to the department. Their medical expenses are also generally covered, although donations may be collected for major surgeries or procedures.

In some areas, retired police dogs garner a type of retirement. It may not be much, but its design is to help the handler, who the retired dog usually lives with, care for the police dog.

K-9 police dogs are an integral part of the law enforcement program. They can go places that human officers may not be able to reach and detect things such as explosives and drugs that aren’t readily apparent on physical inspection of an area. These dogs go through a rigorous training process to make them highly skilled police officers, often learning commands in languages such as German or Dutch rather than English.