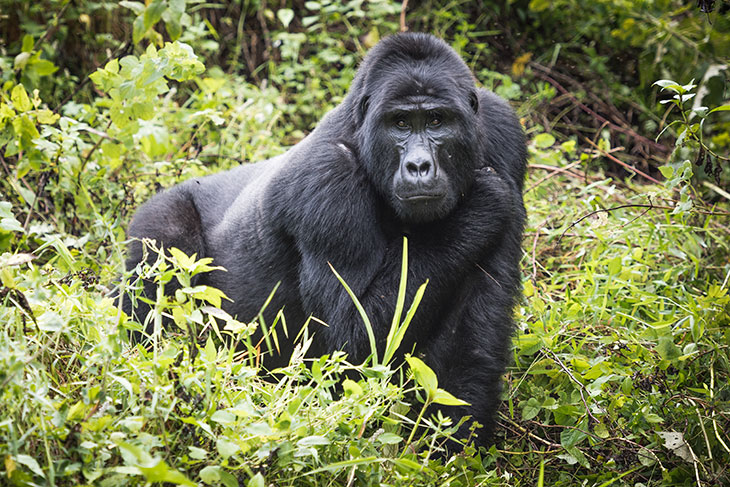 Although apes are mostly peaceful animals, when their troop is threatened, the gorillas will defend itself. It doesn’t hurt to know more information about these animals as well as how to prevent and protect yourself if such situations were to occur, say on a safari or while hiking in the wild.

Considered our third closest cousin, gorillas share 98.3% of their DNA with humans. The largest living primates, they boast many similar characteristics. They have similar, dexterous hands with opposable thumbs and have been observed expressing emotions, such as sadness and laughter. They are also one of the most powerful animals, with a bite force twice that of a lion.

Social animals, they live in groups of between 10 and 50 members. Each family is led by a dominant male, also known as a silverback, and lives in a territory of up to 16 square miles.

Don’t think about out-running a gorilla

Though relatively docile, gorillas are highly powerful and quick animals. They can reach speeds of 20 to 25 miles per hour. To give reference, a human’s average jogging speed is approximately 6 to 8 mph, while the average sprint speed is about 20 mph. Even at our fastest (think Usain Bolt at 28 mph), humans would likely not be able to outrun these quick creatures based on speed and other factors.

Don’t think about out-muscling a gorilla

Outside of quickness, there are many other factors that make human strength and speed pale in comparison to a gorilla. For instance, gorillas can weigh between 400 and 500 pounds! Standing six feet tall on two feet, their sheer size combined with their animal instincts make their reactions faster as well as more committed due to their survival-based brain. As stated by Discover Wildlife, it is surmised that gorilla strength is anywhere between 4 and ten times that of a human.

Gorillas usually only demonstrate loud, intimidating displays when threatened or the alpha male is challenged. According to National Geographic, some defensive shows may include standing upright, roaring, barking, pounding their large chest, throwing things, or making aggressive charges.

If ever on a gorilla safari or you find yourself near one in the wild, actions can be taken to prevent provoking these usually calm animals. Gorilla Trek Africa suggests that you always maintain a distance of at least 7 meters between yourself and a gorilla. If the gorilla comes closer, do your best to keep this separation, calmly move away, and, especially, do not attempt to touch or pet them. It is also important to avoid eye contact, as this can be seen as a challenge. Do your best to keep your energy stable, avoid using high pitched or loud voices that might disrupt the equanimity of the natural environment.

What to do if a gorilla does attack

In the rare case that a gorilla were to charge you, there are safety steps you can take to prevent further escalation as well as decrease interest. A charge or possible attack is denoted by aforementioned signs, such as chest pounding, loud vocalizations, or charging motions. The first thing you can do is to slowly walk away. Magical Gorilla Adventures in Africa recommends you do not attempt to run as this will encourage the gorilla to chase and, as we know, it is not likely they can be outran.

According to Virunga Park of the Congo, do not react back, avoid eye contact, and make yourself as small as possible to show submission and lack of threat. Anything a human can do to show they are not a challenge will help to deescalate the situation since gorillas are most likely to attack when a challenge is perceived.

If a gorilla DOES grab hold of you, do not fight or try to remove the hand as this will engage their fight reflex. Instead, mimic gorilla behaviors by grooming their arms or becoming interested with a leaf on their being. You can also pretend to be a gorilla previous to being touched by the approaching gorilla. Eating vegetation or napping on the foliage may convince the gorilla you are one and the same.

If none of these tactics work, the last effort should be to show your teeth and make loud noises in attempt to demonstrate dominance. As challenge is the last effort, please make sure to try all aforementioned techniques prior to standing up to a powerful gorilla.

Although there are many techniques to help survive a gorilla attack, the best method is always prevention. By respecting their natural habitat through space and a peaceful nature, the gorillas will feel safe and calm in the forests they call home.

Related: Can A Silverback Gorilla Defeat A Lion, Tiger Or Bear In Battle?