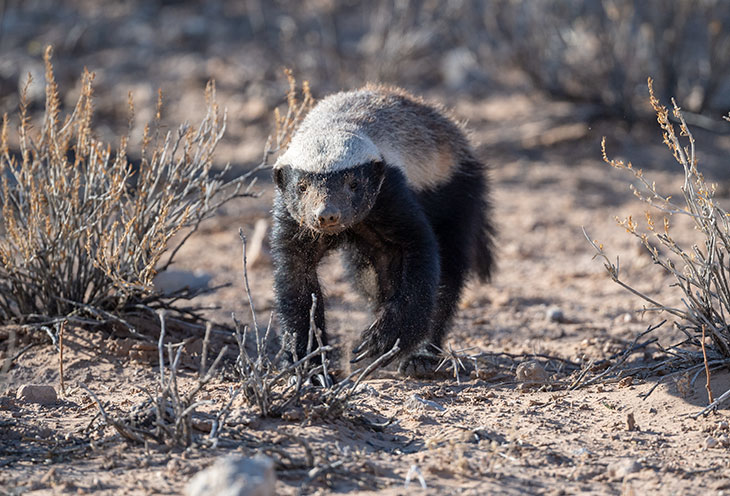 Undoubtedly, you have probably seen one of the many “honey badger don’t care” memes, but have you ever wondered where this meme actually came from and why the simple statement actually makes sense? It turns out that these little creatures, also known as ratels, are pesky and fierce animals. Thus, the “don’t care” sentiment ties back to the fact that this animal makes its own rules, and is fierce enough that most similarly sized animals will keep their distance.

What are the honey badgers defense mechanisms?

Honey badgers, even though they have an average size of only 20 – 35 pounds (for males) and measure under three feet in length, have incredibly tough skin, about 1/4 inches thick, which protects them and helps to keep injuries to a minimum. The honey badger’s skin is largely impenetrable to teeth, stingers, and quills.

Not only is their skin thick, but it is also loose. Should a honey badger get caught in the mouth of a predator, their loose skin allows them to manuever and squirm their bodies around to attack the pedator with their sharp teeth and extremely sharp claws. The also have incredibly strong jaws and are capable of breaking through the shell of a turtle.

On top of that, they are extremely intelligent animals and even haven been observed using tools in the wild.

Further, the honey badger is a tireless animal, and though it can indeed lose in a battle against a predator, it will not stop until it dies, or until its attacker gives in or dies.

Because the honey badger has such thick skin, it can make it difficult for snakes, bees, and other biting animals to penetrate. This puts the honey badger at an advantage to overcome snake bites and bee stings. Further, these small critters have been witnessed in the wild after being bit by a snake, or after consuming a venomous snake. Though the bite may make the badger a bit sleepy, after just a few hours of rest, the badger can get back up and return to its regular activities, showing no further distress or illness from the bite, attack, or consumption of the snake.

In the case of a bee sting, a honey badger can indeed succumb to the poison associated with such bites and stings. However, with its tough hide provides an extra layer of protection for the honey badger, making it far more likely to survive even a series of bee stings or other bites.

What are the honey badgers’ natural predators?

As small and mighty as the honey badger it, it is not without several natural predators. The most common predators of the honey badger include lions and leopards. Lions, in particular, will often close in on a honey badger as a group, taking advantage of quantity and size to take the animal down. However, as mentioned previously, the honey badger will not go down without a fight and can maintain a high level of energy, despite the size of its opponent.

In regards to humans, honey badgers are primarily wary. Though there are no known documented cases of a honey badger biting a human, it is best for humans to keep their distance. A honey badger will indeed be aggressive towards a human if it feels threatened in any way.

How does a honey badger fight off lions? Snakes?

However, the sharp teeth and jaw strength, along with its strong, sharp claws, make the honey badger well-positioned to fight off a snake. If a honey badger sees its opponent, such as a snake, coming, it can often grab the snake in its jaws and bite until the snake gives up the fight or loses its life.

As the honey badger is so fearless, you certainly can’t assume that it won’t be able to hold its own against a lion either. In fact, honey badgers are well known to go after groups of young lions and win. As the honey badger will go after the groin of its opponent, it is well set-up to cause the death of that predator by blood loss.

How predators kill a honey badger?

Thus, predators that are looking to kill a honey badger will best find success if they are able to get in a sneak attack on the badger and crush its skull. Humans, on the other hand, will choose to shoot a honey badger in the head, which is a sure-fire way to end its life.