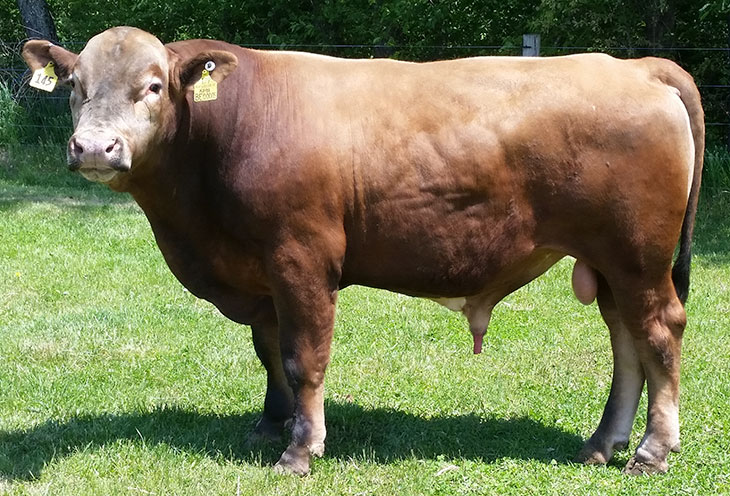 Most people have probably heard of cows and bison, but not of the beefalo. The beefalo is a blend of these two animals resulting in a unique appearance and healthy meat options. Below is more about this interesting animal and why it was created.

Beefalos are a mix of domestic cattle and bison resulting in a larger and much more muscular appearance. An animal must have at least 17% of bison genes to be considered a beefalo.

Beefalos are created by breeding a female bison with a bull. Beefalos have over 30% more cattle genes compared to bison ones although their body looks more like a bison than a cow.

A beefalo has the head of a cow and the muscular body of a bison. Unlike a bison that tends to have a slight bump in the middle of their back, beefalos have a straight spine resulting in no hump. Their hind-quarters are also properly spaced helping them to walk quickly and be free from many joint problems that affect cattle.

The color of this animal’s fur will vary, but most tend to have brown or black hair. Because of their unique hybrid, this fur is also very thick which helps them to survive colder temperatures. This animal is about five-feet tall and weighs anywhere from 1,000 to 2,000 pounds.

Why Was the Beefalo Created?

The beefalo was created by a farmer as a way to help the beef industry recover from breeding problems with cows. While it hasn’t grown in popularity as once assumed, the beefalo provides farmers with a large amount of lean meat.

In addition to this, the beefalo is also safe from many of the diseases that plague cattle, like Bovine Respiratory Complex, Blackleg, and Bovine Viral Diarrhea. This results in a healthy beefalo population for farmers.

History of the Beefalo

The beefalo has been around for centuries. One of the first recorded instances of this animal existing is in 1886 when a Kansas farmer tried crossing a bison and cow together to see if their offspring could survive the state’s brutal weather. A calf was born and he called it a “cattalo”. However, this experiment didn’t work well as the animal was infertile and it was hard to safely find bison to continue the breeding.

Since then, farmers and ranchers have always tried to breed cattle and bison together but they weren’t very successful endeavors and resulted in many infertile animals.

It wasn’t until the 1970s that the first successful breeding experiment occurred when Hereford and Charolais cattle were bred with bison. Because of this, farmers Bud Basolo and Jim Burnell were able to create a fertile beefalo. The beefalo soon grew in popularity with a few ranchers which led to organizations such as the American Beefalo World Registry and American Beefalo Association being created.

Can You Milk a Beefalo?

Beefalos can be milked during the spring, summer, and fall. Beefalos tend to produce more milk during the summer before this amount eventually dwindles during the winter. However, beefalos will only produce milk if they have calves.

Unlike cows who are usually fine with the milking process, beefalos can be a little temperamental during this activity. To help calm them, farmers need to feed them grass which distracts them as they are being milked.

The taste of a beefalo is like that of regular beef but it tends to have less fat making it a popular choice for many. In fact, it has better nutritional value compared to beef. The beefalo is packed with protein and has less cholesterol making it ideal for those who are watching their meat consumption. In addition to this, the beefalo is usually raised organically allowing consumers to eat the meat without fear of it being tainted with chemicals. Despite its health benefits, beefalo meat is rare compared to traditional beef making it much more expensive to purchase.

How Many Beefalo are There?

It’s not known exactly how many beefalo there are in the world but it’s estimated their population is in the thousands. Because of their genetic makeup, beefalos are considered exotic animals in some places making it difficult to fully capture how many exist.

Can a Beefalo Reproduce?

A beefalo can reproduce but this animal doesn’t usually start doing so until they are a few years old. Unlike cattle, the beefalo can continue mating until it’s around 25 years old. While some males are fertile most aren’t. However, all female beefalos are fertile and can start breeding once they are a year old.

Despite their large size, beefalo calves are very small when they are born resulting in easy births for the females. This also prevents farmers from having to worry about common birthing problems that cattle suffer from, such as nerve damage.

Once a female gives birth she has intense supervision of her calf allowing many farmers to leave most of the care to her. Unlike calves born to cattle, young beefalos can stay with their mothers for a long period of time.

What Happened to the Beefalo?

While the beefalo isn’t as popular for farmers to raise compared to traditional cattle, this animal is still around. In fact, there are a handful of beefalo farms that raise these animals for their juicy meat. Beefalos are also much easier to raise as they can adapt to various climates and rapidly gain fat without the need of added hormones. As more learn about the benefits of the beefalo for farming and it being a healthier meat option its popularity is sure to increase around the world.

Beefalos might not be as popular as traditional cattle, but they offer many benefits for farmers and meat consumers. This creature not only has a longer lifespan compared to bovines but its meat is much healthier compared to traditional beef. Beefalos are also docile animals making them easy to raise.

What’s the difference between a Beefalo and a Zubron?

A Zubron is the European version of a beefalo, except a zubron is a cross between a cow and a European bison also called a wisentan.