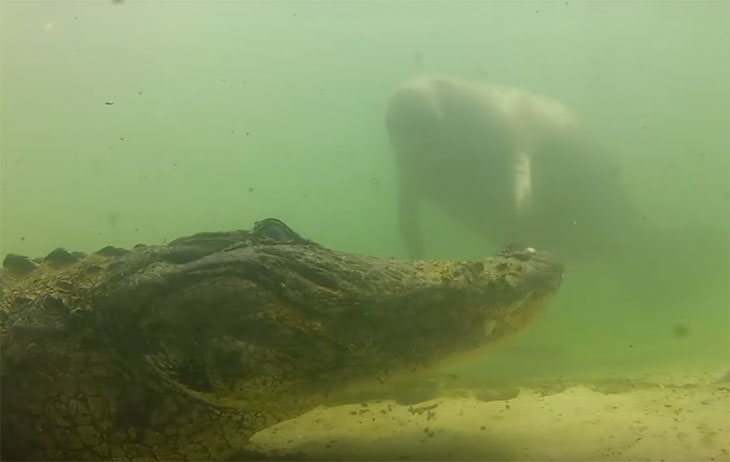 Manatees are large creatures known for their friendly and laid-back personality. However, manatees swim in warm water which is usually filled with predators like alligators. Because of this, some might wonder if alligators eat manatees. Below you’ll discover more information about manatees and their surprising relationship with this reptile.

It’s very rare that an alligator will eat a manatee. Despite alligators being much stronger, they typically leave manatees alone. In fact, many alligators and manatees coexist peacefully in the water. There have also been instances where alligators move aside and let manatees passing through swim ahead of them. Some alligators will bite at satellite tags that researchers put on the manatee, but they usually don’t harm the animal.

There have been many instances where manatees and alligators have formed friendships. In Key Largo, an alligator and manatee were spotted swimming together with the alligator letting its arm lazily rest on the manatee’s back.

Another alligator and manatee pair were spotted in Jacksonville together. The alligator appeared to be riding on the back of the manatee. While it’s not quite known why this occurred, many believe that both animals benefited from it – the alligator getting a free ride and the manatee getting a back scratch thanks to the alligator’s sharp scales.

How Do Manatees Protect Themselves?

Manatees don’t have many defense skills so they are easy prey. However, they might swim to shallow water to help protect themselves from predators. Manatees also tend to swim by themselves which keeps them off a predator’s radar compared to if they swam in a large group. Overall, manatees don’t have a lot of natural predators so they don’t usually need to worry about protecting themselves.

How Thick is a Manatee’s Skin?

A manatee’s skin is extremely thick and is often compared to an elephant’s skin. The manatee’s skin is also somewhat wrinkled and covered in tiny hairs. Some might be surprised to find that these hairs are extremely important to the manatee’s health as they help the manatee to feel where they are. When these sensitive hairs touch or brush against something, the manatee will turn away from that area. These hairs are also believed to help manatees socialize with each other.

What Animal Preys on Manatees?

Manatees are rarely preyed on although crocodiles, alligators, and sharks will sometimes attack them. Manatees in the Amazon will also need to watch out for jaguars who will splash into the water trying to get them. Adult manatees are usually safe from predators and it’s typically the calves that are the ideal meal.

What is the Biggest Threat to Manatees?

The biggest threat to manatees is humans. Many manatees now suffer from habitat loss brought on by human development. Because many humans desire waterfront properties where manatees naturally live, the area becomes too crowded and loud for the animal to dwell in. In addition to this, many homes use harmful fertilizers and pesticides that wash away into local waterways and can cause significant health problems for manatees.

Humans also injure and kill thousands of manatees each year in boat accidents. This is because manatees feed on seagrass close to shore causing them to come into close contact with these vessels. It’s believed that about 100 manatees are injured or killed each year due to boating incidents. Many manatees tend to have scars on their skin due to boat propellers cutting its surface.

To help prevent these accidents there are off-limit areas for boats where manatees enjoy swimming, but this doesn’t fully fix the problem as this animal enjoys roaming around everywhere.

While humans are the biggest problem to manatees, algae can be as well, especially the red tide which causes toxic algae blooms. When the algae bloom, they can pollute the water making it hard for manatees to breathe and can even lead to them suffering from intense seizures. 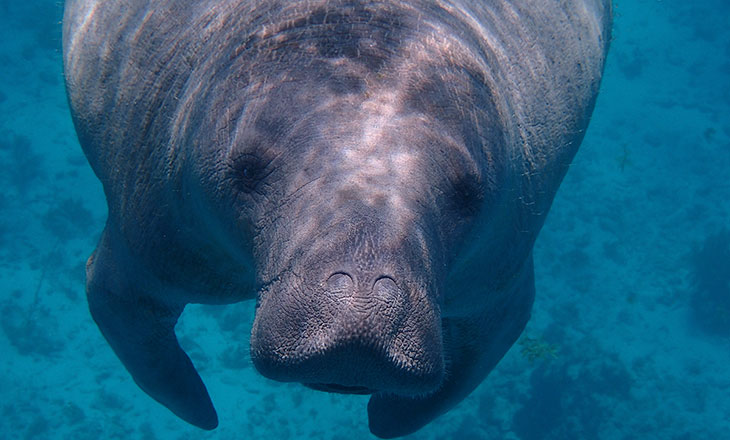 • Manatees are known as sea cows due to their large body and calm personality.
• A manatee will swim to the surface of the water every five minutes so they can breathe resulting in 90% of the air in their lungs being quickly replaced.
• This animal will consistently lose their teeth and regrow new ones throughout their life. When chewing they will use their teeth to grind up the food rather than biting it.
• The manatee can swim at speeds up to 15 miles per hour.
• It is believed there are about 2,000 whiskers on the manatee’s face and 3,000 hairs around their body.
• Despite their large appearance, manatees don’t have much fat on their body which is why it is vital they swim in warm water to ensure they don’t freeze.
• Manatees are related to elephants.
• Early explorers would claim they saw mermaids during their journeys, but it’s now believed that they probably came across manatees.
• When a manatee closes their eyes they will do so in a circular motion.
• The eyes of a manatee feature a thick membrane over them which helps to protect them from particles. The membrane also allows them to differentiate between bright and dim light so they can tell how far underwater they are.
• The average lifespan of a manatee is 40 years.
• Manatees heavily rely on their senses to communicate with others and are thought to have extra senses to help them, including a few that humans don’t possess.
• This animal is a heavy eater and consumes more than a tenth of their weight each day. Their daily diet consists of grass and leaves.
• Manatees are unable to turn their heads due to them not having neck vertebrae. Because of this, if they want to turn around, they must adjust their entire body.

Manatees are some of the gentlest creatures in the world and are one of the few animals that don’t need to worry about being preyed on. Despite this, the biggest threat to manatees isn’t an alligator but rather mankind who destroys their idyllic habitat.

Alligators As Pets - Everything You Need To Know