Imagine you’re on an African plain and the earth beneath your feet begins to shake. You look up and see the gigantic, tank-like shape of a rhinoceros thundering towards you, snorting like a bull with its huge horn lowered. What do you do? Well, don’t try running in zig-zags (that’s how to escape crocodiles) or sit down and try to make yourself small (that appeases gorillas, not rhinos). Your best bet, even if the only things you can see around are a small rock or scrawny tree, is to hide. In fact, you stand a decent chance of getting away with it, because although nature has given the rhinoceros many extraordinary gifts, good eyesight isn’t one of them.

Rhinos are not blind, however they suffer from poor eyesight. Studies have shown that a rhino’s eyesight is around half as good as a cat’s and a tenth as good as the average person’s. They’ve been known not to notice other substantially sized animals, such as humans, even when they’re a hundred feet away on an open plain.

If you were the one that the rhino was oblivious to, you might find it quite sweet and comical, but you wouldn’t be advised to laugh. Rhinos have excellent hearing to compensate for their poor vision, and once they start to charge you and you lose control of your bodily functions they also have an excellent sense of smell to further help them.

But why do rhinos have poor vision? Some have argued that their very fearsomeness may have led to this sense being neglected by evolution over time – with almost no predators willing to take them on, do rhinos even need good eyesight? Unfortunately, most agree that the more persuasive theory is also much sadder. There are very few rhinos left in the world, and where they do survive they are often in very small geographical pockets.

Why do rhinos have poor eyesight?

The result is that many rhino populations have resorted to in-breeding, which results in genetic defects such as poor eyesight and – making the problem even worse – infertility.

How rhinos ended up so scarce is a long story. They were once common throughout Europe, Asia, and Africa and early Europeans knew them well since they appear in cave paintings. Even as recently as the beginning of the 20th century, 500,000 rhinos roamed Africa and Asia, but now that number may have dwindled to as few as 29,000, after decades of hunting, poaching and habitat loss.

In recent years bad news has come thick and fast: the western black rhino and northern white rhinos were declared extinct, only two northern white rhinos remained alive and, just four months ago, Iman, the last Sumatran Rhinoceros in Malaysia, died, Rhinos are far from the only big beast to be endangered by reduced numbers and resultant in-breeding.

What are the effects of inbreeding on other endangered animals?

Giant Pandas, perhaps the most beloved of all endangered species, are also thought to have damaged their own fertility and libido through in-breeding. Even in the best of circumstances Pandas struggle to survive, given that they only live 12 years and have a very brief reproductive period, but their prospects have certainly been worsened by damaged fertility and many cubs being born with genetic flaws, unable to survive for long.

Not all in-breeding is a last resort born of reduced animal populations. Sometimes humans play a direct role, as in the case of white tigers. While some have tried to portray white tigers as an interesting and exotic natural variant on the classic orange tiger, this isn’t the case. In fact, a white tiger hasn’t been seen in the wild since the 1950s, when a white cub was found by chance with a family of orange tigers. The person who found him saw commercial potential in his naturally light coloring and stole the cub. All of today’s white tigers are descended from that one individual and are the result of countless generations of inbreeding in order to repeat the same genetic variant.

Some of those white tigers have become famous, especially through the ones used by Siegfried & Roy in their Las Vegas shows. But the less showbizzy reality is that most white tigers are afflicted with a range of genetic problems, ranging from the milder (virtually all have crossed eyes and cleft palates) to the more serious (kidney problems and spine issues, leading to early death).

The plight of in-bred white tigers became well known when one particularly deformed white tiger called Kenny was rescued at around 2 years old. A breeder had been unable to sell him due to his obvious defects, and had left him in his own filth until he was taken in by a refuge. Kenny died a year ago, a young victim of a skin cancer he may have been left vulnerable to by his cruel genetic inheritance. 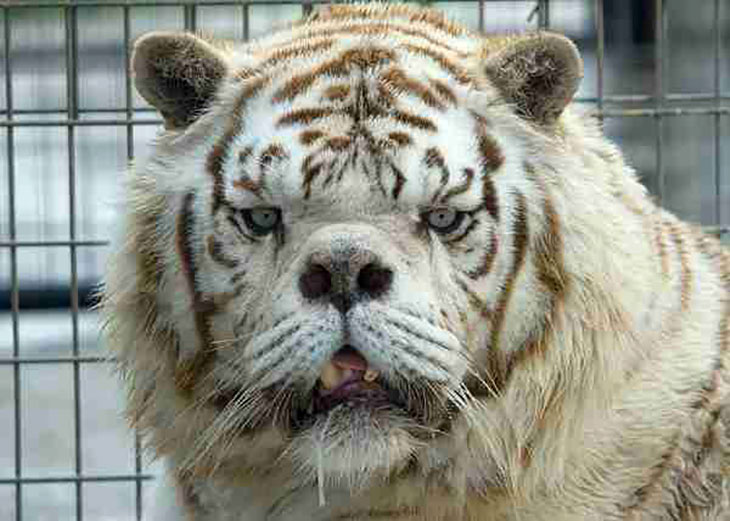 But you don’t have to travel to a circus to see evidence of in-breeding. In fact, you may see it at your local dog park. Inbreeding in pedigree dogs arises because certain dogs with particularly excellent characteristics considered representative of that breed are then used to father many litters of puppies. Later some of the resulting puppies will be mated with other dogs having the same father from other litters, leading to in-breeding.

Some dog breeds are well known to be prone to high incidences of birth defects related to in-breeding. For example, Dalmatians often have poor hearing, Boxers are prone to heart disease and many German Shepherds have hip problems. While advocacy groups and breeders are beginning to bring in some new measures to deal with the problem, it is still very widespread.

Which is why we want to move on from this depressing topic and leave you with one reason to be cheerful. And, guess what, it’s all about rhinos again. Before we gave you a list of rhino species which had gone extinct, with in-breeding partly to blame. What we didn’t mention was that there were other species which had come back from the brink of extinction.

Black rhinos are gaining in numbers rapidly in Africa and, learning from research into in-breeding, a new effort is being made to intervene in the fate of the endangered Sumatran rhino. Healthy specimens will be relocated to different geographical locations to inject fresh genes into the remaining gene pools, all with the aim of giving these awe-inspiring beasts a chance to thrive and frighten yet again.

Why Are Bloodhounds Such Good Tracking Dogs?Sexual Cannibalism: Why Do Some Animals Eat Each Other After Mating?Why Do Llamas Spit?Why Are Pigs Pink?Why Are Hippos So Aggressive?Why Are Honey Badgers So Hard To Kill?