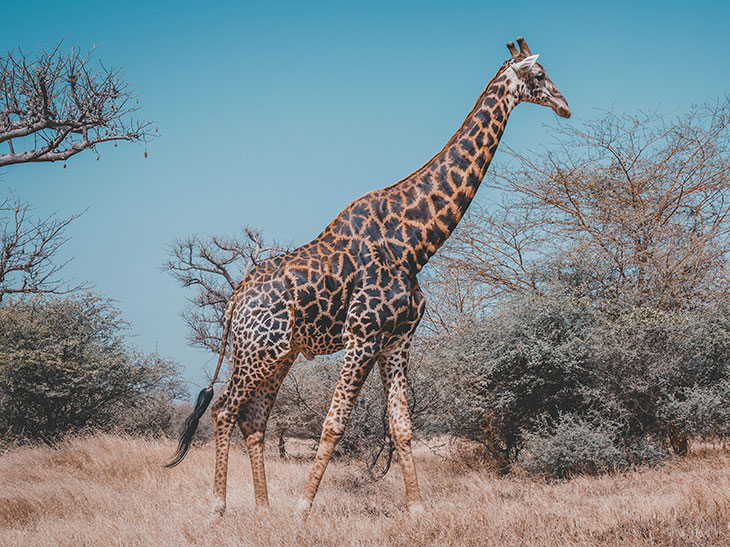 A Giraffe’s Kick Is No Joke

Given that a giraffe’s legs are longer than most humans are tall, at six feet long, it’s perhaps unsurprising that they can generate a lot of power. In fact, a giraffe’s kick can generate an impact of 2,000 Pounds-of-force Per Square-inch (PSI). That’s about the same as the strongest kick ever recorded from a horse and a lot more powerful than a kangaroo kick, which generates just 850 PSI. As for humans, the most powerful impact recorded in Thai kickboxing was a relatively puny 450 PSI (though that’s still more than enough to fracture a skull or dislocate a jaw, as fans of the sport will know).

Even more dangerously, and unlike a horse, a giraffe can kick in any direction. There’s a good reason why experienced safari guides rarely let themselves or their guests get too close to a giraffe, even from behind. Indeed, less than 18 months ago one farm worker in South Africa was tragically kicked to death by a giraffe on a gaming lodge.

A giraffe doesn’t kick out of aggression, of course, but only when frightened and attempting to defend itself. Evolution has made sure that its kick is strong enough to disable or kill a predator, which is why even the fiercest carnivores will generally only attack an adult giraffe if truly desperate, starving or plain stupid.

Can A Giraffe Kick A Lion’s Head Off?

One exception is pack hunters, particularly lions, but even then it’s a gamble. For one thing, a giraffe is an exceptionally fast and surprisingly graceful runner, capable of reaching a speed of 35 miles an hour. If cornered, however, it will certainly use its kick as its main defensive weapon, lashing out with its sharp, 12 inch hooves. One widely shared video on YouTube shows a giraffe kicking and trampling a lion to almost certain death.

It’s even been claimed that giraffes have decapitated lions with their kicks. Although this doesn’t appear to have been captured on film, and may be apocryphal, there’s certainly a good chance that a well aimed kick could at the very least shatter a lion’s skull to such an extent it would look very much like a decapitation.

Do Giraffes Really Kick Their Babies?

Another widely shared but disputed story about a giraffe’s kick is that mothers use it on their babies mere moments after being born. The most famous telling of this tale is by Paulo Coelho, the famed self-help-orientated author, who explains that the mother “gives the baby giraffe a gentle kick which sends it sprawling. It tries to get up and is again knocked down.” Coelho explains that these kicks are designed to teach the new-born the importance of being stubborn and getting back on its feet, since a giraffe is much more prone to predators when lying down.

It’s true that new-born giraffes are able to stand remarkably quickly – within an hour – but most observers of giraffe births haven’t seen this kicking behavior, and instead witnessed the mother showing its calf great affection and love. This would seem likelier, given that birth must be a shocking enough event for a giraffe calf without any kicking – it falls two meters to the ground before even drawing its first breath! Coelho may be engaging in a little poetic license in his parable, although it may be true for some giraffes in particularly hostile and predator-filled environments. It’s certainly the case that young giraffes are taught how to kick very soon by wise and protective mothers.

What Other Animals Have Strong Kicks?

Giraffes, of course, aren’t the only creatures to have learnt how to kill with a kick. Zebras are known to kick with as much power as a giraffe, which is impressive given that their legs are considerably shorter. However, lacking the giraffe’s ability to kick in any direction, they are less deadly and far likelier to fall victim to big cats clever enough to attack them on their vulnerable flanks.

For the most terrifying kick of all, however, you need to leave Africa and head for Australia. We aren’t talking about kangaroos, here, though they are famous for kicking humans and each other, and may be the original kick-boxers. We’re talking about the rare but terrifying cassowary, a flightless bird.

Being flightless would normally make the cassowary vulnerable to predators – after all, many other such birds have gone extinct, including the famous Dodo. However, the cassowary has two defensive weapons in its armory. One is its famously unpredictable and aggressive temperament which has made it much feared by other animals and sensible humans. The other is, of course, its kick: it can run at speeds of 30 miles an hour and leap three feet into the air, slicing open its victim with razor sharp, 5 inch claws. That’s why they make very risky pets, as one unfortunate Floridian found last year when he was killed by one he owned.

The lesson of all of this is that we should be careful not to judge an animal’s deadliness based on its appearance alone. We’re of course wariest of animals that bite, whether the venomous strike of a snake or the flesh ripping jaws of a crocodile or tiger. We’re much less likely to be frightened of a giraffe, kangaroo or cassowary. That can be a big mistake, as lions and humans alike have often found out to their cost. Beware of the kick!