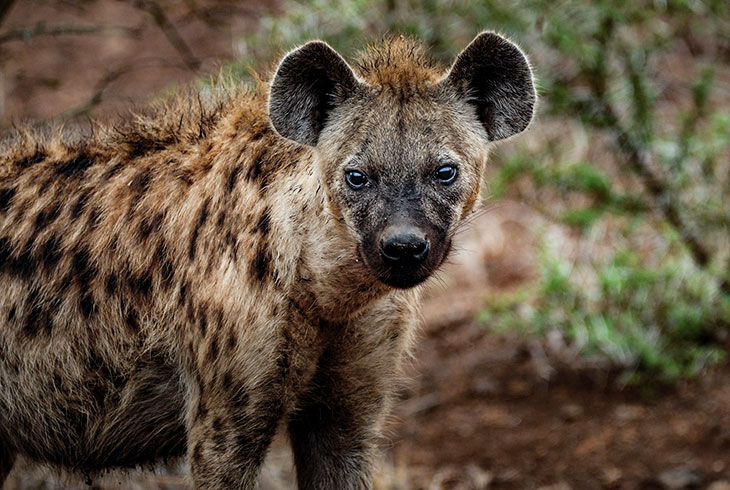 We absolutely DO NOT recommend that you try to tame a hyena or even own a hyena, but lets take a hypothetical detour and see if taming such a wild animal is possible.

All hyenas belong to one of four species that include the spotted hyena, the brown hyena, the striped hyena, and the aardwolf. These animals feature several characteristics with canines, including being non-arboreal, catching prey with teeth, and using their non-retractable claws for running. They also share some features with felines, such as scent marking and grooming, which puts their behavior with that of other feliform animals.

The spotted hyena tends to be a highly social species of hyena, while the other hyena species tend to be a bit less social. They may live in family groups, however, so don’t expect to find a hyena all on its own. Striped hyenas tend to be scavengers, while spotted hyenas hunt and kill most of their prey. Their large claws and powerful teeth make them a threat, especially when in a group. These pack hunters are capable of taking down mid size elephants, giraffes, zebras, buffaloes and wildebeest.

Hyenas range in size, from approximately 2.8 feet long to 5.4 feet long. They can weigh up to 140 pounds, and the spotted hyena features an impressively strong bite force, 1100 pounds per square inch. To put that in perspective, Kangals have the strongest bite force of any dog species, 700psi and, a grizzly bear has a bite force of 1200 psi.

They mark their territory with scent glands that produce a paste that can even be detected by humans several meters away.

Female hyenas tend to be larger than the males, as well as much more aggressive. These fierce predators can attack a variety of larger animals and will even consume leopards and other predators. These animals are also considered smart, with research showing that they may be as intelligent as primates. Their social structure alone is highly complex, illustrating their intelligence.

What Would It Take to Tame a Hyena?

Hyenas take a great deal of patience to tame, as well as a firm hand to function as the leader of their pack. The striped hyena is the smallest of the hyenas, and it is also the easiest to tame. They can be fully trained and have been for thousands of years. The Ancient Egyptians would tame these animals and use them as hunting animals. Some people equate their behavior and affection to that of a dog when raised from youth. Attempting to train an older animal would be much more difficult and dangerous.

Hyenas have a predatory drive, which needs to be met even in captivity. You’ll be feeding them large quantities of meat, as they are carnivores. Dog food is not designed to meet their dietary requirements.

They also need enrichment, which they get from each other and hunting. As highly social animals with a complex social structure, living alone with humans is not what they were designed to do. Owning more than one hyena would increase the risks involved, as they are generally even more effective hunters when hunting in a pack. They need strong enclosures and a large area to roam, as these are large animals that can run quickly and jump high, meaning your regular 6 foot privacy fence around a quarter acre yard is insufficient to meet their needs.

Hyenas are also able to bond with dogs, particularly striped hyenas, when they are raised in captivity. They are prone to killing dogs in the wild, so they should be raised together from a young age to mitigate the danger.

Can You Bond With a Hyena?

There is evidence that people and hyenas can form a strong bond. One man in Africa, Abbas Yusuf, is also known as the Hyena Man. In his native Ethiopian village, he has formed such a strong bond with the local hyenas that he can feed them by hand. He learned his skills from his father, who would lure the hyenas away from the local livestock with scraps.

Abbas has names for all of the wild hyenas that come when he calls them, and tourists come to the area to see his bond with these animals. When one photographer was recording Abbas and his bond with the hyenas, he noted that Abbas could even crawl into a hyena den with pups and be perfectly safe. While these animals are not tame in the strictest sense of the word, they have been tamed by one man.

Is It Legal to Own a Hyena in the United States?

Owning a hyena as a captive animal is allowed in certain states within the United States. Nevada has some of the loosest pet restrictions, while California and Hawaii have some of the strictest. Even if your state allows owning a hyena, your city or county may ban the owning of exotic species. Generally you will need a permit, and you may be required to have specific housing and fencing requirements to own one.

Why Is It Not a Good Idea to Tame a Hyena?

Among some reasons not to tame a hyena are the fact that they are highly aggressive and unpredictable animals. They are extremely strong creatures, much stronger than dogs and combined with their predatory instincts and their powerful bite, you could easily be maimed or killed without warning.

They can never be trustworthy in the way a a dog would be. They are scavengers and would gladly kill anything smaller or weaker than them (baby, kids, dogs, cats)

Hyenas would require large and secure enclosures and cannot ever be considered safe to freely interact with and handle.

Can Hyenas Be Domesticated?

Over time it is certainly possible that hyenas could become domesticated, but it is not likely. Domestication is a process of genetic modification that takes hundreds, if not thousands of years of selective breeding for hyenas to be a house friendly animal.

Hyenas can be tamed, but that doesn’t mean it’s a good idea for you to go out and get one. These large predators are intelligent and need a great deal of care. You’d also need to provide regular enrichment, and the amount of raw meat one hyena could consume is no joke!