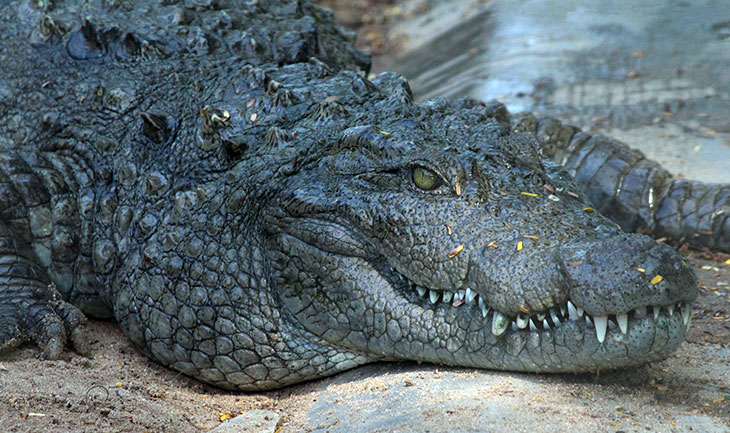 Aging is a fact of life: We watch our parents, pets and selves age along with non-living things like cars, clothes and outdated iPhones. Immortality is something we don’t accept as real, but what about the crocodile? Does it disprove or challenge our beliefs around everlasting life? Yes, thanks to their “negligible senescence.” Senescence is biological aging: things like losing the ability to reproduce or losing functions necessary for life due to aging. Senescence, or aging, defines a species’ lifespan. Crocodiles may exhibit negligible senescence: no deterioration due to aging. This means that Instead of an average or defined lifespan, they are more likely to die due to accidents, disease, predation or starvation. Does that make them immortal? It depends how you look at it.

Crocodiles are not immortal, however they do not have a defined lifespan. In the wild they appear to have an average lifespan of 70-100 years. That said, they do not often die of what we would call “old age.” Crocodiles more often die of other causes. That said, they are not ageless. Crocodiles, like humans, lose muscle tone, teeth and female crocodiles produce fewer eggs as they get older. Crocodiles in zoos do eventually die, even when well kept, but have exhibited exceedingly long lives.

The long lives of crocodiles and the reason more die from other than age-related issues are due to their negligible senescence. They are essentially the same from when they reach adulthood throughout the rest of their lives which offers them a competitive advantage others lose due to aging. Crocodiles are biologically immortal but still die for a variety of reasons.

And The Award Goes To…

Mr. Freshie, who passed in 2010 at 140 years old, is accepted as the longest-living crocodile in captivity. This freshwater croc lived in Australia and was caught by Steve and Bill Irwin. He had been shot more than once. Freshwater crocodiles are docile but still shot thanks to fear and misunderstanding their nature.

Currently, the oldest living crocodile in captivity is Henry, a 120-year-old male saltwater crocodile residing in South Africa. He lives with six female companions and has fathered more than 10,000 offspring in the last 30-35 years.

Other Animals with Crazy-Long Lifespans

Crocodiles aren’t the only animals that can live well over the century mark. Many of these animals are found in the water.

Arctic or bowhead whales, for example, have a lifespan of about 200 years. The oldest known bowhead was 211 years old at the time of its death. These mammals sometimes serve as historical artifacts: these whales have been found with 200-year-old ivory spears still embedded in them. They are the mammals with the longest lifespan.

Another sea animal with a long life is the Greenland Shark. Using the lenses of nearly thirty female sharks scientists were able to find that the lifespan of these creatures is at least 272 years. They are the longest-living vertebrate.

There are clams, worms and other animals like sponges and bacteria that also have long lifespans.

Discovered in 1833 the Turritopsis nutricula, or immortal jellyfish, shocked scientists in the mid-90s when they figured out that it is essentially immortal. They can die and are often eaten but if they live to adulthood they start using a process called transdifferentiation which allows them to regenerate any part of their body into any other part. It does this when sick or injured to repair itself and keep living. While genetically identical around the world, they develop differently depending on climate. Those in cooler places have 8 tentacles where the ones in warmer climes have 24.

Some consider lobsters to have a long life with males averaging 31 years and females 54. Lobsters produce an enzyme that can repair their shells. That said, they often die of exhaustion during moulting (the shedding of the shell while growing) or stop moulting entirely when older. This makes them more susceptible to injury and infection, a common cause of death in older lobsters.

Hydra reach maturity in five to 10 days but live to be around 10,000 years old making them immortal as far as human brains can comprehend.

Animals that live especially long often become known. Ming, a quahog clam, for example, lived to be 503 years old. Sadly, the geriatric clam was killed by scientists who opened him while trying to figure out his age. Quahog clams develop a ring on their shell for every year of life, like trees.

A favorite old animal is Jonathan, the 188-year-old tortoise living his best life in St. Helena in the South Pacific. His 188-year life means he has been alive for both world wars, seven British monarchs, and 39 U.S. Presidents. He’s also lived through tons of firsts: the first postage stamp, skyscraper, photograph of a person and incandescent light bulb. He is the oldest land-living animal.

The Other Side of the Coin

As there are animals with tremendously long lifespans, there are also some with very short life spans.

Insects like house flies, dragonflies and drone ants live a matter of weeks to months (the dragonfly lives four months). Rodents also have short lives. House mice live maybe a year with guinea pigs living an average of four. And the ever-changing chameleon? Also a year.

Perhaps animals like crocodiles don’t meet the traditional definition of “immortal.” These animals offer an interesting look at aging. Some could unlock medical mysteries for humans. Imagine if they could figure out how immortal jellyfish mutate their cells to repair themselves!

How Do Crocodiles Mate?