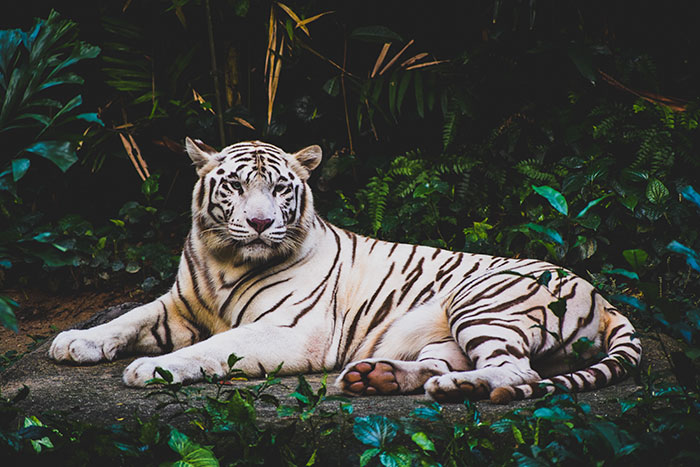 White tigers are some of the most stunning animals in the world, but they can only be found in captivity. Despite once having populations throughout Asia, the white tiger no longer exists in the wild for a few reasons. Lets explore how white tigers came to be and why they no longer are found in the wild.

Are There Any White Tigers in the Wild?

Unfortunately, there are no longer any recorded white tigers left in the wild. The last one reported living in the wild was in 1958, but this animal was killed by a trophy hunter. While this isn’t to say that there aren’t one or two hidden deep in the wild, most scientists believe they no longer exist there. If someone is intent on seeing a white tiger in the wild, they’d have to travel to the jungles of India or trek through Siberia and China, but their chances are very slim.

Can White Tigers Survive in the Wild?

This animal is extremely strong and could kill enough prey to survive in the wild. However, because of the problems with their genes, they would suffer from a variety of health concerns which could prove to be problematic for them. Besides this, because their fur is vibrantly white, it removes their camouflage which makes them easier for humans to see, especially hunters. In the end, they would be able to survive in the wild but not for long.

Why Do White Tigers Exist? How Did They Come to Be?

White tigers are created when two Bengal tigers, who have a specific recessive gene, mate. This ends up causing their offspring’s coat to be pure white rather than orange. This genetic defect not only affects the color of their fur, but can play a major role in the white tiger’s overall health and longevity.

The first white tiger recorded was Mohan who lived in Rewa. Once word spread of these magical animals, numerous people sought to either hunt them or capture them as pets. Eventually, white tigers were taken to zoos around the world to be put on display.

While at first white tigers were merely created by chance, humans now understand how they are formed causing them to inbreed Bengal tigers until they produce a white tiger.

White tigers aren’t albino. Their fur is white because it lacks pheomelanin, a pigment needed for hair coloration. While they were once referred to as “partial-albino tigers” this isn’t true. Despite white tigers having some albino traits, they still have slight color in their eyes and nails, something that true albino animals don’t have. White tigers also have stripes on their body that range from light brown to black.

How Many White Tigers Are There?

It’s believed that there are about 200 white tigers in captivity today, all of which are a result of inbreeding.

Are White Tigers Made By Humans?

While white tigers weren’t originally made by humans, the ones found in the world today most likely are. Humans breed white tigers and Bengal tigers in hopes of them producing more of this interesting animal. Because white tigers are so rare, humans will over-breed them causing the animals to become exhausted and leading to the formation of multiple medical conditions.
Most white tigers can be found in zoos, but some private breeders also buy them and try breeding this animal themselves for money. These animals will be bred together multiple times which can result in their offspring having severe health concerns.

Why Are White Tigers Being Bred?

Breeders usually breed white tigers with the excuse that this animal is endangered and by breeding them it helps to keep their numbers up. However, this is usually a cover-up because the breeders sell these animals for large profits thanks to their rareness.

What Happens When White Tigers Are Bred?

When white tigers mate many things occur. Due to excessive inbreeding, the litter size of white tigers is dramatically reduced and could cause some of them to die. In fact, sometimes baby white tigers must be euthanized after being born because their body is so disfigured that they won’t be able to survive for much longer. All of this also leads to genetic defects which significantly shorten the life of a white tiger.

One of the most notable examples of what happens when white tigers are constantly bred is Kenny. This white tiger is best known for his deformed face and physical limitations, all of which are the result of inbreeding. 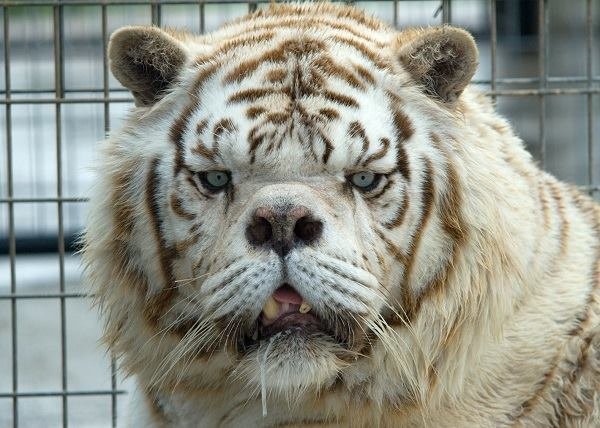 Unlike tigers who can live for up to 20 years in captivity, Kenny only lived for 10 years. Kenny was diagnosed with melanoma before his death and fought against the disease for a year before succumbing to it. While it’s not known if this skin cancer was the result of his genetics, because of Kenny’s already weakened immune system it didn’t help his survival chances.

Another famous white tiger, known as Mantecore, was a popular site at Siegfried & Roy shows and lived to be 17. While it’s not known if Mantecore suffered from health issues, his lifespan was much smaller compared to tigers in the wild.

Why Shouldn’t White Tigers Be Bred?

Despite their stunning coat, there are numerous reasons why white tigers shouldn’t be bred. The main one is because of extreme genetic problems. Because white tigers are usually the result of family members being bred together, it can cause their genes to malfunction resulting in health issues like cleft palates, poorly functioning organs, bulging eyes, hip dysplasia, and spinal deformities. A few white tigers are also cross-eyed and might be missing part of their body, like lips. In addition to this, white tigers have weaker immune systems which cause them to catch illnesses and diseases faster. Due to these severe health conditions and concerns (which often cause the white tigers pain), it’s ideal to stop breeding them.

(Related: Why Are Rhinos Blind?)

White tigers once lived in the wild but no longer exist there for a variety of reasons, including extensive health concerns and the greed of trophy hunters. Today, if someone wants to see a white tiger they will have to travel to a zoo or animal sanctuary.

Why Do Tigers Live Alone?