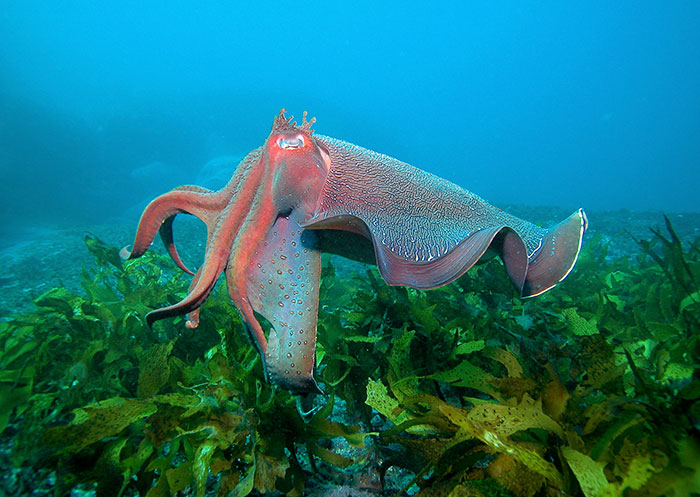 One of the most fascinating aspects of the animal kingdom is the variety of methods predators use to catch their prey. Some swoop from the sky like eagles, some hunt in packs like wolves, some are solitary stalkers like tigers, and some are cunning trap-makers like spiders. But very few creatures can rival the cuttlefish when it comes to weird, wonderful and wily hunting.

Cuttlefish, like squid and octupuses, are cephalopods, but are even more fascinating than their more famous cousins, particularly when it comes to their hunting techniques. While the squid and the octopus are both able to attack at speed thanks to an internal jet propulsion technique, and are also known to employ camouflage and ambushing in their hunting, the cuttlefish takes all of these to the next level.

All cephalopods are able to change their coloring through extraordinary cells in their skin called chromataphores but the cuttlefish are by far the most creative with this talent, "It really is electric skin," Roger Hanlon, senior scientist at the USA’s Marine Biological Laboratory, has explained of how cuttlefish brains transmit signals to the chromataphores, instructing them to turn on and off. "A cuttlefish has maybe 10 million little color cells in its skin, and each one of them is controlled by a neuron. If you turn some on, but leave others switched off, you can create patterns."

So, while octopuses and squid will use camouflage to conceal, a cuttlefish will sometimes takes the exact opposite approach. They can easily disguise themselves as coral or seaweed, thanks to the shape-shifting abilities of their soft bodies, endlessly flexible tentacles and ability to change their very skin texture, but as soon as prey is near they can use their multi-colored skin to create a pulsating, patterned lightshow of the kind you normally find on a huge screen behind a DJ at a rave. The performance hypnotizes a shrimp, crab or fish which is close enough and can lure it closer to the cuttlefish, until its time to strike and the deadly-sharp cuttlefish beak snaps shut on its stunned victim.

There’s a particularly unusual cuttlefish that uses its chromataphores not for hiding or for hunting but as a warning. While many cuttlefish have venomous bites, the flamboyant variety – Metasepia Pfefferi – is the only one to have deadly poisonous flesh. This is useful, since the flamboyant cuttlefish is both small and a poor swimmer which mostly gets around by ambling around on the seabed on its tentacles. Normally these disadvantages would make it an easy target for other predators, but the lightshow it puts on if threatened acts as a huge warning sign to hungry carnivores, signaling that it is a meal that might not end well. You can witness this incredible little creature’s warning display right here:

Other Tricks of The Trade

Cuttlefish which don’t boast the dubious distinction of being incredibly poisonous still have a variety of tricks available to them if they aren’t able to successfully camouflage themselves and do find themselves under attack. The simplest of these is to turn on the jet – like other cephalopods they are able to propel themselves at incredible speed by filling their muscular bodies with water and then forcing the water out through a narrow tube.

If that doesn’t work they can use a more sly trick and, like other cephalopods, squirt out a cloud of ink to confuse a predator and help them escape unseen. But the cuttlefish has one even more amazing trick up its sleeve: it can actually create a decoy of itself. By mixing its ink with mucus it can create a denser cloud of inky matter and then use its tentacles to mould it to roughly the same size and form as its own body. This amazing creation, called a pseudomorph, is often more than enough to confuse its would-be assailant.

If you aren’t already wowed by the cuttlefish, then consider their mating habits. It won’t surprise students of nature to learn that, like many creatures blessed with vivid coloring, the male cuttlefish will use it to put on a dramatic courting display for females they are trying to mate with. Unfortunately, males hugely outnumber females, which sometimes means that the smaller males, outgunned by bigger rivals, have to get a little cunning in order to procreate.

At this point, those remarkable chromataphores find another use. A small male may find a rare and alluring female, only to be frustrated to also find a large male who has already mated with her acting as a guard. At this point the small male will subdue his coloring to resemble a much less vivid female, conceal the fourth pair of arms that all males boast, and even change his shape to look like he’s carrying eggs. It’s a highly risky ruse but it often works: according to a 2005 study, these gender-bending males successfully fool their rival and mate with the female in almost 50% of cases.

With all these extraordinary abilities it’s perhaps not surprising that a common reaction to cuttlefish and other cephalopods is to think of them as being more like aliens than normal terrestrial creatures. What is surprising is that even some scientists agree. A controversial paper published in a scientific journal in 2018 argued that the incredible intelligence of the cephalopods, along with their extremely complex genome and their unique ability to edit their own genes, suggests their evolution might have involved infection by an alien virus which landed on earth in a meteor 540 million years ago.

While most scientists dismissed these claims at the time, and there is certainly no convincing proof, the fact they were even allowed to be made in a serious scientific journal shows just how fascinatingly different cuttlefish and their cousins are. There’s little doubt that there will be even more amazing discoveries made about these lifeforms in the future, as humans are able to explore the greater depths where so many live. Get ready to be even more amazed.