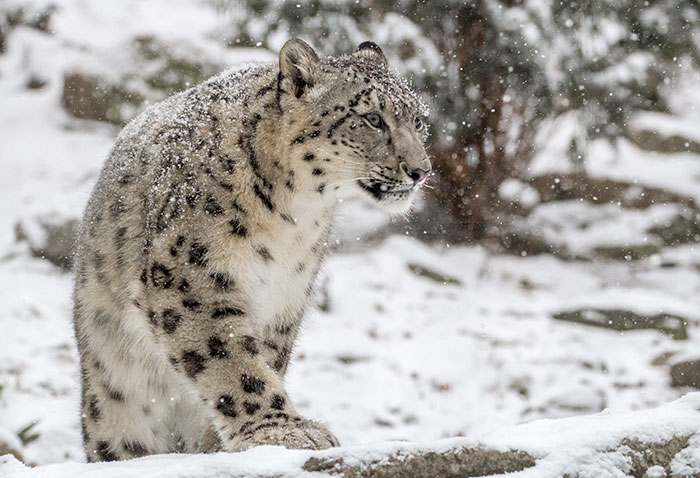 Snow leopards are one of the only major cats native to Asia and are known for their light-colored fur that is covered in vibrant black spots. Nicknamed the “Ghosts of the Mountains”, snow leopards wander quietly through the land and usually only make an appearance in populated areas when in search of food. However, despite living in solitude, the number of snow leopards in the wild are quickly decreasing for a few reasons.

What is the Biggest Threat to the Snow Leopard?

The snow leopard has quite a few threats they need to watch out for, most of which are created by humans. This includes habitat loss, poaching, and hunting.

Snow leopards might live in the mountains, but they also enjoy roaming around in surrounding fields. However, local farmers often claim this land for their livestock resulting in snow leopards losing important grazing areas.

Mining is also causing severe habitat loss for snow leopards as it creates unsafe conditions for them in the mountains due to the loud and destructive construction. Miners destroy the cliffs around the mountains to find sources of fuel. Because laws aren’t always set up to safeguard the environment, the snow leopards end up suffering.

In addition to this, climate change is also having an impact on the snow leopard. This animal needs cold weather to survive and most of its diet depends on chilly weather as well. However, because of rising temperatures, snow is quickly melting on the mountains and causing only a small amount of vital vegetation they need in their diet to grow.

Poaching is a major problem for snow leopards because they are a favorite animal for fur traders to catch. This is because the animal’s coat is considered to be an extraordinary buy for customers resulting in high profits for the illegal fur trade.

Snow leopards also face the threat of being hunted. Because snow leopards prey on livestock they are more likely to be shot by farmers to prevent catastrophic loss. Eventually, the farmers might end up killing numerous snow leopards at once resulting in their already small population quickly becoming smaller.

What Are Snow Leopards Killed For?

Snow leopards enjoy preying on livestock making them a major nemesis of farmers. Because of this, farmers often shoot these animals to protect their herds.
Sometimes snow leopards are accidentally killed because they step into traps set out for other animals. While the snow leopard might escape, the leg caught in the trap will be damaged forever causing this animal to be in severe pain and losing the essential ability to hunt.

As mentioned above, snow leopards are sought-after by fur traders for their beautiful coat. While illegal, fur traders will trap snow leopards and later take their pelts to sell. This is one of the main reasons why this animal is killed.

How Many Snow Leopards Are Left in the Wild?

It is believed that there are only about 4,500 to 7,500 snow leopards left in the wild and live in areas such as Russia, China, Nepal, and Mongolia.

How Many Snow Leopards Are Killed Every Day?

While it’s not precisely known how many of these animals are killed each day, it’s thought that at least one snow leopard is murdered daily.

Despite being hunted and preyed on by humans, snow leopards aren’t endangered. However, they could easily become extinct if their habitat is not maintained and if the poaching of them gets out of control.

Snow leopards could become extinct if their habitat continues to be destroyed and their population is eventually killed off. Because their numbers are already somewhat low, if not quickly protected, snow leopards could be wiped off the face of the earth.

Why Are Snow Leopards Important?

Snow leopards are important animals mainly because they help to keep certain animal populations down, such as the Argalis, a type of mountain sheep. Otherwise, this animal would overpopulate an area which can cause major destruction to its infrastructure.
Humans will also find that snow leopards are important to their future as well. Snow leopards help those living around the mountains tell the health of the local environment, such as if the rivers (also used by humans) are polluted. If the snow leopard is unable to survive in the area, humans will find that they will be unable to as well.

What is Being Done to Protect Snow Leopards?

Conservationists are trying to do many things to protect snow leopards. This includes creating protected areas for them to live in and working to prevent drastic conditions caused by climate change.

Many are also working to ensure that farmers don’t let their livestock overgraze in areas often visited by snow leopards. This not only protects the farmer’s livestock, but prevents farmers from shooting snow leopards in defense of them.

What You Can Do to Help Snow Leopards

You might be surprised to learn that there are a few things you can do to help protect this animal.

A few organizations allow you to adopt one of these animals. You’ll provide a monetary fee that will go toward conservationists protecting them. Sometimes the organization will also send you updates about the animal you’re defending and advances made in ensuring they don’t go extinct.

Another way you can help snow leopards is to advocate for them. By getting out and protesting or writing to a local government official, you can make a huge impact in the snow leopard’s future.

You could also host a fundraiser in honor of snow leopards. After receiving the money, you can then donate it to an organization, such as the Snow Leopard Conservancy, that is dedicated to helping this animal survive for generations to come.

Snow leopards are one of the world’s most unique animals that are rarely seen yet make a huge impact on the area they live in. While not yet extinct, if measures aren’t taken to protect them, this beautiful animal could soon be gone forever.