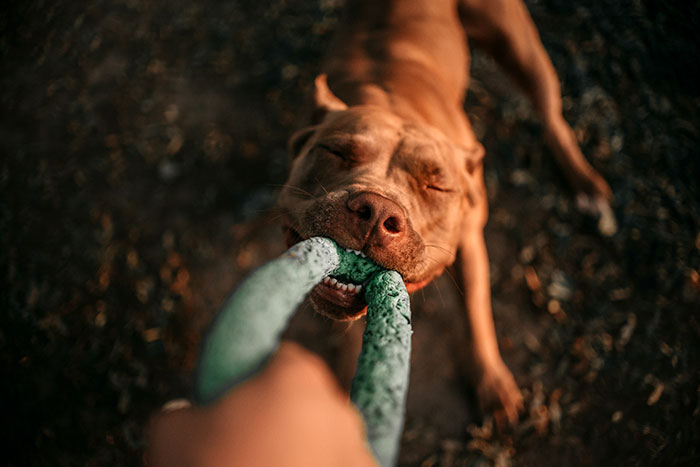 When it comes to dogs, there’s probably no more controversial breed than the pitbull. Often at the center of debate, the breed is known for its unique look, loyalty and strength. One thing people wonder is whether or not a pitbull’s jaw locks when it bites, making it impossible to remove the dog from its target. There’s a lot to know and understand about this breed and it’s infamous bite.

How Strong is a Pitbull’s Bite?

The strength of a bite is measured in pounds per square inch or PSI and called “bite force.” For reference, the average human bite force is 162 PSI. The animal considered to have the strongest bite force is the Nile crocodile at 3,700 PSI. While many might assume the pitbull is closer to a croc than themselves they would be wrong! A pitbull bite has a bite force is only about 235 PSI. Siberian Huskies, Rottweilers, and Akitas measure in at around 300-350 PSI and the Kangal has the strongest canine bite force at 743 PSI.

The Danger is in the Shaking

Pitbulls are terrier breed dogs. This category of breed is known for a tendency to hold onto and shake prey, not simply bite and release. This, and not the actual bite, is what makes a pitbull or other terrier bite so dangerous. These types of bites cause significant damage, especially if the bite has broken the skin. With the teeth in the skin, the shaking tears tissue and damages bone.

All dogs have the ability to do significant damage when shaking. That said, the shaking of prey is a natural instinct. Watch your dog with his toys and you’ll likely see this. If the dog has the front of its body bowed (called “the play bow”) it’s nothing to worry about. If the dog shakes the toy with an aggressive stance, keep an eye on it. While playful shaking is fine with the dog’s toys, do not allow them to shake anything else. If your dog grabs and shakes a shoe or pillow, immediately make them drop the item and give them a toy instead.

A Pitbull’s Jaws DOES NOT Lock

Don’t believe the myth: pitbull jaws do not lock when they bite. They are a breed that is known for stubbornness and this affects everything they do. In fact no breed of dog has any mechanism in their mouths that allows them to lock their jaws.

Pitbulls and other bulldogs were originally bred for bull baiting. This now-outlawed bloodsport pitted bulls against other animals. Bulls are large and strong. They buck wildly, so bulldogs were bred to be able to hang on.

After bull baiting stopped many kept pitbull and other bulldogs or crossbred them to retain some of their characteristics. These dogs are strong and can handle various difficult terrain. They are smart and don’t quit, making them great working dogs.

The pitbull is determined to do everything to completion, including bite. Thus, it can be very difficult to get a pitbull to stop. It’s important to train all dogs, no matter their breed, to obey your command to “stop” or “leave it” from puppyhood. Any determined dog that bites will be reticent to release.

How Do You Get A Pitbull To Release Its Bite?

Prevention is the key! Having a well-trained dog allows you to avoid most biting situations. If you are considering adopting a pitbull start with obedience and other types of training early and socialize your dog with lots of people and animals.

Of course sometimes things happen. There are a few methods to get a pitbull or any other dog to release a bite they’re being stubborn about. All of these put you at risk which is again why we suggest training your dog.

Grabbing a dog’s tail will often get it to stop. You must continue to hold the dog’s tail if you take this approach so that the dog cannot turn around and bite you. You can also grab a dog by it’s back legs and swiftly flip it on its back but again, this does put you at risk.

With training and socialization, all dogs can be trained to release the rare bite. Pitbulls have about less the bite force as other breeds. Their tendency to hang on and shake is what makes their bite dangerous. Any dog breed is capable of biting and refusing to release so no matter what kind of dog you have, it’s important to start teaching them from puppyhood to only shake toys and to release upon your command. Always work with your veterinarian or a trainer to address potentially dangerous behaviors.