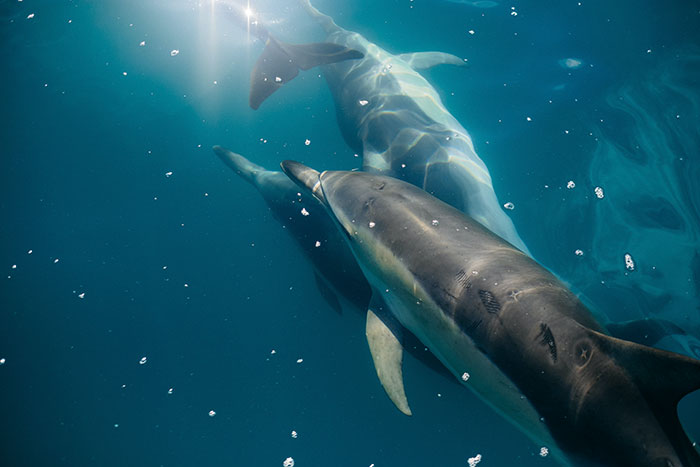 Ask a room full of people what their favourite animals are and the chances are one or two will answer “dolphin”. In fact, these creatures inspire such universal affection, with their extreme sociability and playfulness, that a columnist for New York’s defunct Village Voice magazine once wrote an exasperated column entitled “Everyone loves dolphins except me!” Perhaps it’s this adorability that has led to some people believing dolphins mate for life. This is a myth: while dolphins can form lifelong bonds of affection with another dolphin, these are usually between two males. Sexually, they are anything but monogamous.

Do dolphins get pleasure from mating?

In fact, dolphins appear to have an extremely complex sexual and emotional life, just one of the ways in which they can appear oddly human. Dolphin ethics specialist (yes, that’s really a job) Professor Thomas White once told the Daily Telegraph, “Dolphins are mostly bisexual, sometimes heterosexual, sometimes homosexual, and quite frequent—eight to 10 times a day I’ve been told.” This frequency might be because dolphins, along with humans and bonobos, are one of the few animals that seem to have sex for pleasure.

Scientists have observed dolphins mating frequently throughout the year, even though females are only fertile for a few months, which means that they aren’t driven by purely biological imperatives. These sexual encounters are often as brief as ten seconds, reflecting the difficulty of coordinating copulation underwater, but they have been witnessed taking place in many different positions, suggesting a certain sense of fun.

(Related: Which Animals Mate The Longest?)

What’s even more remarkable is that dolphin sex researchers (yes, that’s really a job) have discovered that female dolphins have a clitoris much like the human clitoris, similarly bundled with nerves and positioned in such a way as to be stimulated during dolphin copulation. Coupled with playful behaviour during, before and after mating, all of this suggests that dolphins can indeed enjoy mating.

How does dolphin courtship work?

Male dolphins can certainly be quite exuberant in their efforts to attract females. Some scientists have noticed male bottlenose dolphins arching their head and cavorting through the water in what they have nicknamed a “rooster strut”. Some serenade potential mates with trumpeting noises made through their blowhole. And in one particularly affectionate species, the humpback dolphin, males have been seen trying to win over females by presenting them with gifts of large marine sponges.

Unfortunately, this kind of playful and “romantic” behaviour is far from universal. Male dolphins’ sexual behaviour can also be, as one New York Times headline put it, “brutal, cunning and complex”. Research into the behaviour of bottlenose dolphins off the coast of Australia found sexual behaviour which might look playful from a distance, but would land humans in jail if they tried to copy it.

Groups of male dolphins have been observed forming alliances to intimidate a female dolphin into leaving another pod and joining their own. To keep the female close they will often engage in feats of threatening prowess, surrounding her and leaping and somersaulting around her to make escape difficult.

If she does manage to break away the dolphins have been seen to chase, bite and slam into her with physical force to make her give up the attempt. It would be difficult to call these sexual encounters consensual. According to dolphin sex researcher Dara Orbach, harbor porpoises may be even more coercive, waiting for a female to come to the surface of the water to breathe, and then leaping out of the water and trying to hook her with their penises.

This isn’t to say that female dolphins are monogamous either. Like many other species, females have been observed to mate with multiple partners during their periods of “estrus” (sometimes called “being in heat”), which may be a way of maximizing the chances of successful impregnation or could be related to that well-developed clitoris discussed earlier.

The Curious Case Of Margaret Howe and The Bottlenose Dolphin Peter

Perhaps the myth of dolphins falling in love is partly a result of one of the strangest experiments in animal behavior studies, and one which is said to have inspired the recent Oscar winning movie “The Shape Of Water.” In 1965, a scientist named John C. Lilly – fascinated by the human-seeming behavior of dolphin – sought to bring the two species closer together. He flooded a villa with 22 inches of seawater and arranged for a human woman – Margaret Howe – to share this space with a male bottlenose dolphin called Peter.

The idea was to watch how the two interacted and communicated over ten weeks but the situation became complicated when the dolphin began to show signs of sexual arousal around Margaret. Feeling threatened (and, given the above facts, not without reason) Margaret ended up relieving the dolphin of his urges manually, essentially entering into a sexual relationship with him. Many have questioned the ethics of this experiment, and it was abandoned a month early, but the fact that some reported it as the dolphin having “fallen in love with a woman” and dying of heartbreak after may have led to lasting confusion over dolphins as being lovelorn and romantic.

Do any animals mate for life?

That doesn’t mean that there aren’t species which couple up for their whole lives. Gibbons and beavers are known to form lifelong mating partnerships, although that doesn’t mean that there isn’t some occasional cheating. Swans are also known to form lasting commitments, and the male of the species appears to be one of the few animals to believe in gender equality, not only helping build nests but also sharing egg incubation duties.

Perhaps the most devoted animals of all might surprise you. We hear the words “lone wolf” and it sounds threatening, but it may in fact be something very sad. In the wild, wolves couple up and begin breeding by the age of two, building their wolf pack by having a new litter every year. Think of them like The Waltons on four legs. Usually only death will separate the two “married” wolves, which means a lone wolf is usually either a lonely single looking for their life partner or a bereaved wolf in mourning.

Which all proves that just because an animal appears adorable that means it really is when it comes to sexual behaviour, or that just because another creature seems threatening and unfriendly it can’t build loving and nurturing relationships. After all, animals are complex, just like us.

How Do Dolphins Defend Themselves? 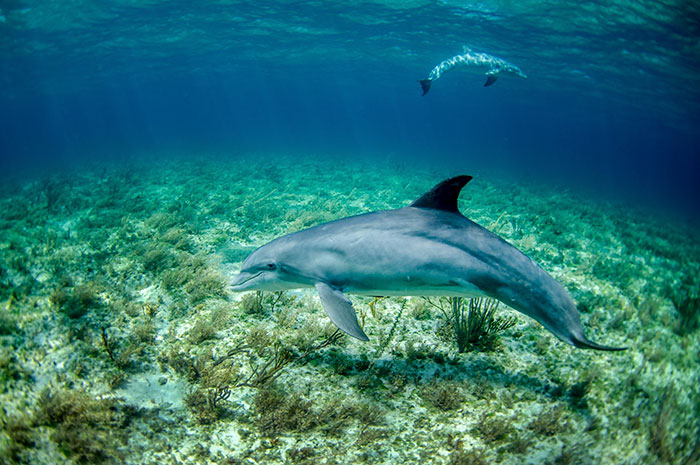