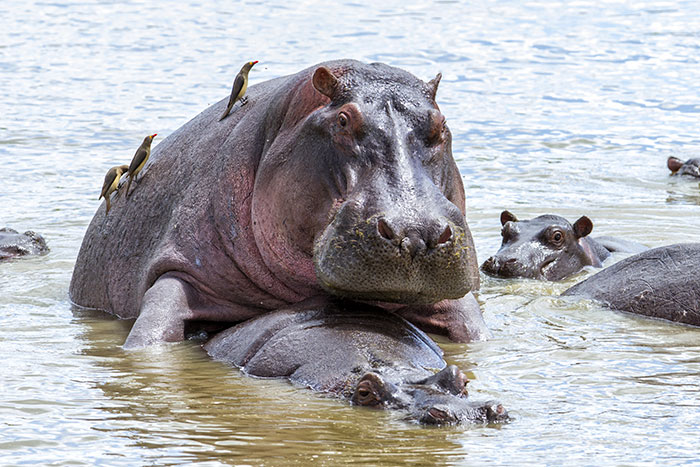 If you’re eating while you read you might want to come back later, as we are about to dive into the rather foul sexual habits of the hippopotamus. If you’ve ever heard that old song “The Hippopotamus Song (Mud, Mud, Glorious Mud)”, you might not think that mud is quite so glorious after reading this. But before we enter gross-out territory, let’s first talk science.

Do hippos mate for life?

Like most animals, hippos are polygamous, and both males and females mate with several different partners in their environment throughout their lives. But if the word polygamy makes you think of some kind of non-stop sexual orgy, you’d be wrong. In fact, mating only occurs around every two years, for the female at least. After a female has conceived she doesn’t begin to ovulate again for approximately 17 months, and males don’t seem too keen to push the issue: the females may be smaller than males, but can still turn into 3,000 pounds of angry teeth and tusks when “not in the mood”.

With these exceptionally long gestation periods, hippos – like elephants, whales and, yes, us humans – are classic k-strategist animals, This means that they have fewer offspring, but invest more time and care in bringing them up to maturity, as opposed to r-strategists, which have an abundance of offspring and let them loose on the world, knowing many of them will die before adulthood but that sheer numbers give their genes a chance of survival.

When do hippos mate?

While hippos don’t have a rigid mating season, with fertility reflecting their own personal cycles rather than an environmental cue, many have observed that there is a noticeable increase in sexual activity around May and June when the wet season is just beginning. Given how much hippos love the water, we might think of these as the kind of frolics which humans enjoy when the sun first comes out in the summer.

But how does a male know if its advances might be welcome? Well, much like dogs, males may try to assess a female by smelling her urine or sniffing her behind. When a female is entering her three day fertile period, things get rough in hippo society. Male hippos are in a constant battle for dominance with each other, but nothing brings this out more than the possibility of sex. Terrifying fights will often break out between males as they compete for territory (an absolute necessity if a female is to consider your advances) and around 90% of the less dominant males are excluded from mating. One dominant bull typically has about 10 cows in his territory.

How does hippo courtship work?

However, pure aggression isn’t enough to win a female hippo’s heart. It also requires seduction. And this is where everything gets a bit unpleasant, so please don’t say we didn’t warn you. When the male wants to attract the female’s attention, he will urinate and defecate into the muddy area around him and then use his tail to whip the concoction all around him, even showering the female in his waste products. If she is feeling particularly alluring, she will repay the compliment with some sprayed defecation of her own. All of this is accompanied by incredibly loud honks from all parties, so they certainly aren’t shy about their habits.

Once the wooing is over, the female will lie in the water and allow the male to mount. This must be terrifying: a male can easily weigh 5,000 pounds and given that the sex usually happens while standing in water, and that the process can last 30 minutes, drowning is a real possibility. She’ll normally go through this several times during her 3 day fertile period, before the dominant male wanders off to find a new female to charm.

(Related: Which Animals Mate The Longest?)

Fortunately, hippos make much more pleasant parents than dates, or at least the females do. The female gestation period lasts eight months and produces just one offspring (this is rather fortunate, given they can weigh 110 pounds on birth).  At the time of birth the female typically leaves the herd to give birth and create a bond with her calf. She can give birth on land or in water, although if the baby is born underwater the mother needs to be alert enough to push the newborn to the surface to breathe very quickly.

For the first eight months of its life, the calf will feed on the mother’s milk on land or underwater. If the latter, the calf is able to close its nose, ears and eyes to prevent water getting in, and can stay submerged without breathing for five minutes or more. The mother will remain very protective of her calf throughout its young years, as it is still vulnerable to many predators, including crocodiles, lions and hyenas. Young hippos are most at risk from other hippos, however, particularly if they accidentally get crushed during a mammoth battle for dominance between two large males.

Fortunately, by the time the calf is seven it is fully grown, and at this point is far less vulnerable. Weighing at least two thousand pounds, and blessed with terrifying aggression and tusks, there are few predators brave or foolhardy enough to take on an adult hippo. Lions may try in packs, but they will often regret the decision.

Can hippos mate with rhinos?

One final question that crops up surprisingly often on the Internet is whether rhinos can mate with hippos. The short answer is no. The only species which can interbreed are usually closely related with very similar genomes, such as panthers, dolphins, horses and giraffes. Rhinos and hippos are only distantly related, and the question largely seems to crop up because they are both large and grey (but then, so are rocks). There may also be another good reason they don’t interbreed – perhaps female rhinos just aren’t enticed by a hippo spraying her with its urine and feces? They may be fussy like that.

Why Are Hippos So Aggressive?Why Can't Hippos Swim And Other Fascinating Animal Facts of the WeekDo Hippos Have Predators?Do Dolphins Mate For Life?How Do Ducks Mate?How Do Crocodiles Mate?