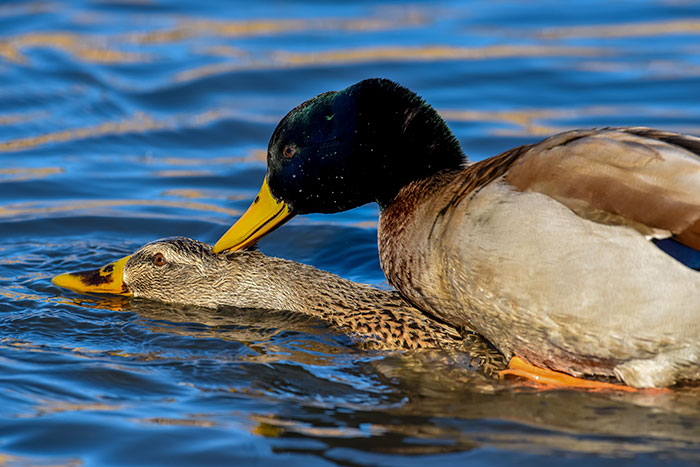 If you have fond childhood memories of watching the antics of Donald Duck – or Daffy, or Huey, Dewey and Louie – then you might find what you’re about to read a bit upsetting. If, on the other hand, you remember watching the George Lucas produced 80s megaflop Howard The Duck, and thinking the human/ duck sex scene was deeply disturbing, then you’re about to find out you didn’t know the half of it. Because ducks – yes, cute, quacking, couply ducks – have one of the darkest sex lives of all animals.

You may feel confused reading this. After all, we often see male and female ducks bobbing together on ponds, rarely out of each other’s sight, like a long time married couple. In fact, this is just the first of many illusions we will regretfully shatter here. Ducks – unlike geese and swans – don’t indulge in lifelong monogamy, but part at the end of their mating season and find a new partner for the next season. Bird experts call this seasonal monogamy.

How does duck courtship work?

The actual process of pairing up can be extremely competitive. Many duck species produce more males than females, which gives females the advantage when it comes to choosing. She’ll generally choose a male with vibrant coloring (a good evolutionary marker of physical fitness), as well as one who can perform a good mating dance and song. This means males can’t just be born beautiful, they also have to put effort into developing their talents and entertaining their audience. It’s a bit like auditioning for American Idol.

The courtship begins when the female signals she is ready for breeding by swimming with her neck extended just above the surface of the water. This will usually attract the attention of several males, and she will choose by swimming towards her new paramour, quacking frantically and shaking her head. There will be some ritual dancing, including wing flapping and general preening, before copulation begins.

How do ducks mate?

And this is where things start to get… surprising. The first clue that things may be getting unusual is that the male duck has a penis at all. Evolution has disposed of the penis in 97% of bird species, but ducks (and some other aquatic birds) have retained them, presumably because they help prevent sperm washing away in water. But this is no ordinary penis.

Firstly, it is normally housed, inside out, in a sac within its body. At the moment of copulation it is filled with lymph fluid and ejected at great speed to penetrate the female, often reaching a length of 20 centimetres. Sometimes these jet-propelled penises are longer than the ducks themselves and, interestingly, research shows that they grow longer the more male rivals are near, suggesting size does matter to ducks at least. Oh, and the penises regrow every year. We almost forgot that

Still not freaked out? Then let’s take it up another notch. Not only are these penises gigantic, but they are also corkscrew shaped, ridged and spined in order to ensure that they cannot slip out or be removed without their consent. They are like a cross between a Medieval torture instrument and your worst Amsterdam sex shop nightmare. Fortunately for the female the moment of sex is brief – a few seconds at best – but less fortunately it can take many minutes for the lymph fluid to ebb away and allow the painful penis to recede.

Why do male ducks turn to rape?

Let’s go up another notch. This sexual encounter might sound vicious and unpleasant, but it is at least consensual. What happens next is not. After having made her choice, the other rejected males turn nasty and the female is frequently raped several times during her period of fertility. In fact, females will usually experience far more non-consensual sex than consensual.

Sometimes it can be risky or misleading to apply human notions like consent to animals, but – in the case of the duck – evolution itself has recognized this rape for what it is. Because, extraordinarily, the female duck has, in response to the male duck’s devilish design, counter-evolved an elaborate defense. After all, the female making her choice is Darwinist natural selection at work, and rape endangers the principle, so it makes sense that evolution might defend itself.

Why do female ducks have corkscrew shaped vaginas?

How it has done so is quite extraordinary. Female ducks have developed an elaborate anatomy that includes multiple paths in their reproductive canals, including some that are actual dead ends. The female is able to guide an unwanted penis towards these dead ends. Once her ordeal is over she is able to expel the unwanted sperm and keep only that which she selected herself. It’s an incredibly successful strategy: in almost 97% of cases the duck is successfully fertilized only by the duck she herself chosen.

Unfortunately, unwanted pregnancy isn’t the only danger the female duck faces during what can easily become a gang rape. These attacks are often exceedingly violent and can easily lead to the female’s death by drowning, rendering all of her evolutionary ingenuity redundant. The Los Angeles Times once vividly described witnessing these attacks: “Females that escape alive drag themselves out of the water stripped of the feathers on their heads and backs. Some lose an eye.”

The female duck that does escape the ordeal alive and pregnant by the intended partner may face a brighter future for a while. She’ll prepare a nest in the land and begin laying one egg a day. The male may even help a little bit by guarding the area, though he plays little active role in the rearing of his offspring. For the rest of the season the ducks may form an apparently rather happy little family unit, with mother trailed by a chain of adorable fuzzy ducklings.

But, next time you are charmed by this sight, remember that once the season is over the offspring are mature and they will prepare to enter the brutal sexual battle that is duck mating. As many unwise purchasers of wild animals can tell you, just because an animal is adorable when young doesn’t mean it can’t turn vicious when older.