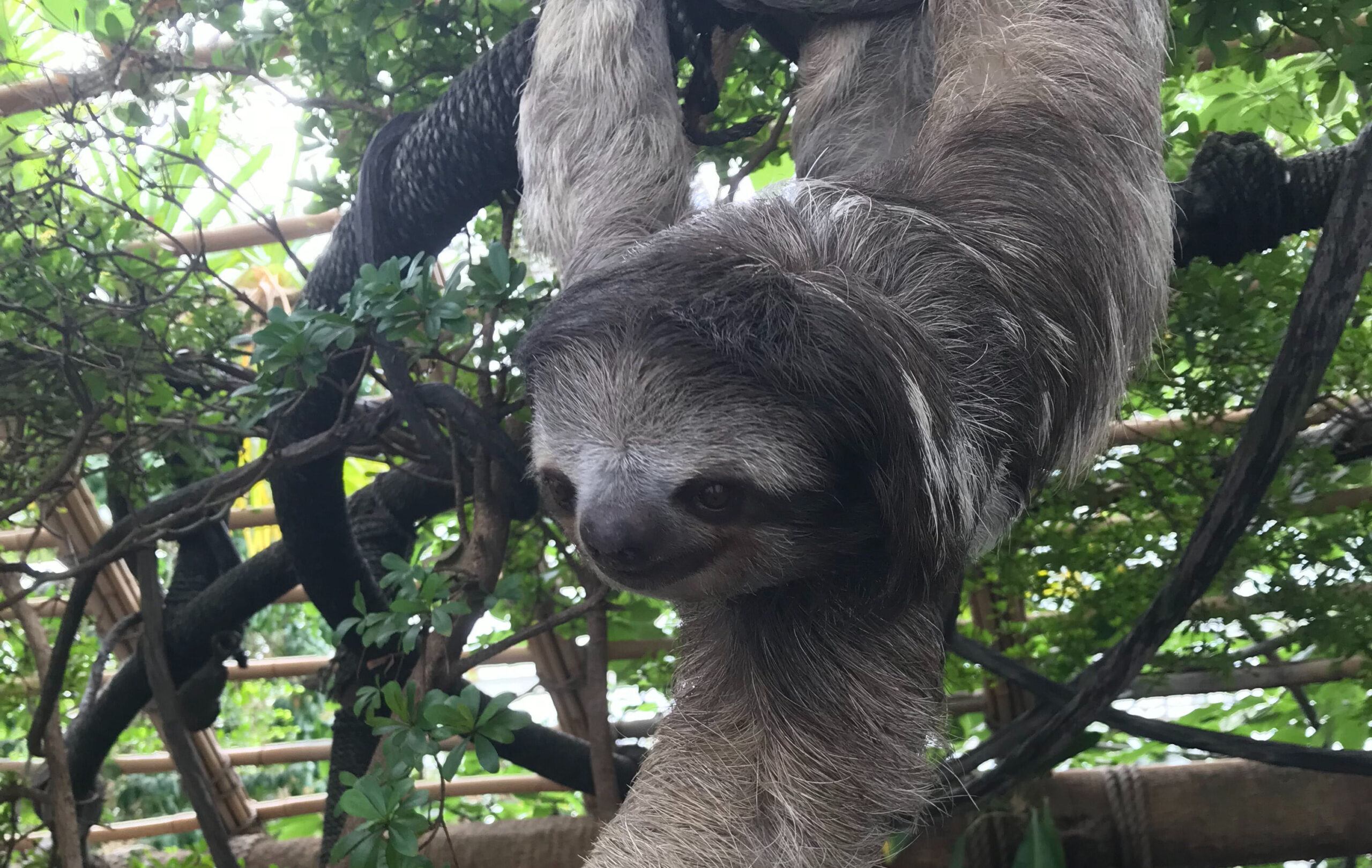 These sweet and somewhat adorably-funny looking animals do have pretty long claws, though, and it often makes people wonder if sloths can be dangerous to humans. Many tourists find it hard to believe that the hippopotamus is one of the most dangerous creatures known to man. After all, they appear cute and are so big and presumably fat that one could never imagine how fast a hippo could move on land before taking its kill. So, could the same situation be true of the sloth?

Thankfully, in the case of the sloth, they are not dangerous animals. Though a sloth, particularly a two-toed variety, will bite if provoked, in general, a sloth is not the type of animal to stalk its prey and eventually rip it to shreds. Quite the contrary is the case, as the natural reaction of the sloth when in stressful situations is to act still. Their ability to act so still, combined with their unusual ability to camouflage themselves with algae, creates a unique ability to protect themselves from danger. After all, if they don’t move and they blend into the background in their environment, it will make it hard for a predator to find them.

How Do Sloths Protect Themselves from Attackers?

Though sloths tend to be docile animals and are relatively harmless to humans, it is essential to understand that with any wild animal, if threatened, the natural reaction will be to protect themselves. Thus, if a sloth fails to defend itself through camouflage and stillness, it will not hesitate to use its claws or teeth as a way to protect against a predator or attacker.

Sloths are preyed upon by jaguars, snakes (anacondas in particular), harpy eagles, and margays. When threatened, the sloth will slash out at the predator by using their sharp claws. The claws on a sloth can get to be three to four inches in length, and are extremely sharp. Thus, if a predator comes at the sloth, the slow will swing its arms and legs at the attacker with the intent to inflict damage. In other cases, and sometimes in combination with the use of claws, a sloth will also use its teeth to bite its attacker. These cheek teeth, embedded in the sloth’s mouth, are incredibly sharp and can easily inflict damage that can end the life of a predator.

Those who have worked at sloth sanctuaries or have had sloths as exotic pets will be sure to indicate that a sloth has scarred them. This isn’t to say that the sloth intended to cause harm. However, when you are dealing with an animal with claws that are up to four inches in length, interactions may inevitably lead to some scratches here and there. And with any animal that scratches or bites a human, this can lead to infection for the recipient of that scratch or bite. For this reason, even though sloths are mostly harmless and are not considered dangerous, it is best to keep a safe distance and respect the space around the sloth, especially when they are in their natural habitat.

What You Need to Know About Sloths

Though we have already established that sloths, in general, are not dangerous, there are some things that you need to know if you plan to go out on a sloth-sleuthing mission.

• A sloth has a very strong vise-like grip that they can retain even after they die. This means that if, for some reason, a sloth is aggravated or threatened to the point of feeling the need to defend itself, it can get a secure grip on you.
• Sloths can turn their heads almost 360-degrees. This means that wherever you are, the sloth can keep an eye on you. This ability to see from just about any angle serves as a critical defensive mechanism. However, it also means that you won’t be able to sneak up on the animal, even if your intentions are good. Thus, make sure you don’t try to approach one of these animals slyly. A sloth will know where you are coming and will be willing to protect itself if it feels threatened.
• When humans handle a sloth, especially one that is in its natural environment can cause the animal to become disoriented. And, just like when a human is disoriented, they may make rash decisions and have unpredictable behaviors. For a sloth, these unpredictable behaviors may result in a lashing from the animal’s claws or an excruciatingly painful bite from the sloth’s teeth.
• If you happen to come across a sloth during its weekly trip to its urination or defecation spot, be aware that the sloth may be more aware than ever. As it is, when a sloth is making its trek to take care of business, it risks its own life. And, the sloth knows that it is in danger and is at its most vulnerable when on the move. Further, the actual process of excretion for the sloth can be a bit like giving birth. If you think through the logistics of emptying your bowel only once per week, you can imagine the situation. This means that the sloth is especially exposed and will be on guard. As a result, any surprise, even from an unsuspecting tourist looking to capture the photo of all photos, may be the unexpected recipient of a sloth-induced injury.
• The fur on the sloth hosts a variety of fungi and parasites that are known to cause malaria and Chagas disease. Though the sloth may be able to host these dangers without ill effect, it doesn’t mean the same for a human should the human come in contact with the sloth.

Ultimately, though sloths are mostly safe animals to be around, it is essential to remember that they are still wild animals. Creatures such as the sloth are best viewed from a comfortable distance in the sloth’s natural habitat. By respecting the sloth and its environment, both the sloth and human admirer will be best protected.

Where Can I See A Sloth? 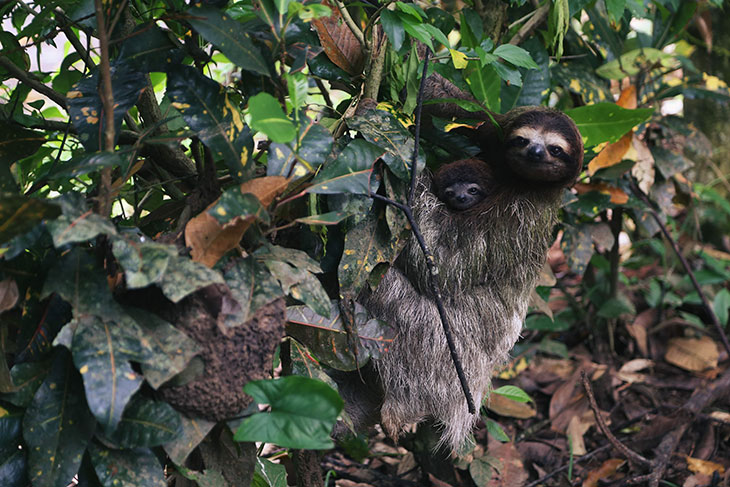 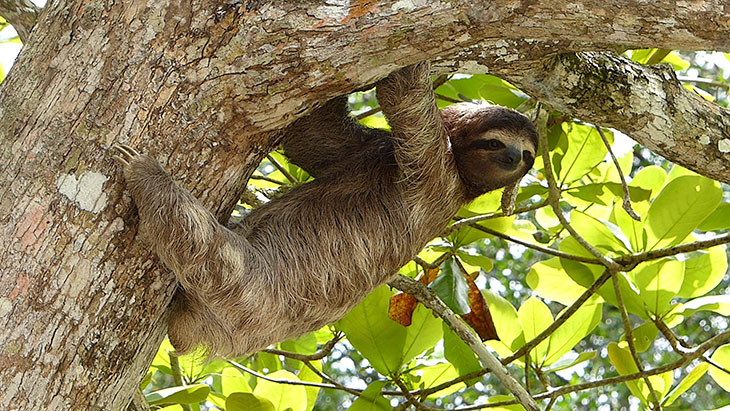