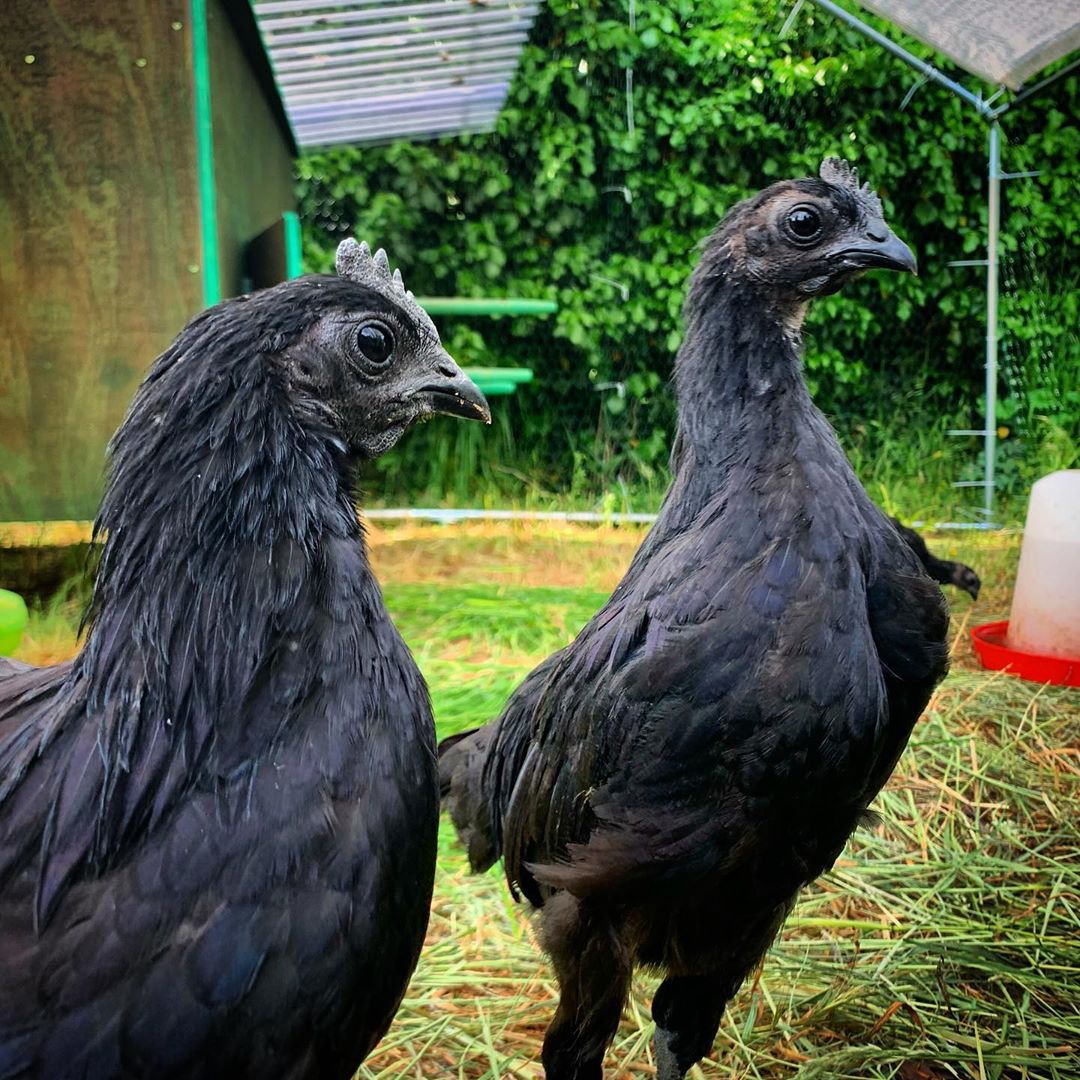 The world’s most expensive chicken, the Ayam Cemani, is a rare breed believed to be only native to Indonesia. In this country, this bird is greatly respected because many believe it holds magical powers and is seen as a good luck symbol. They are also known for their solid black appearance giving them an unusual look. But most of all, the Ayam Cemani is popular for its luscious meat which is sought-after by people around the world.

How Much Do Ayam Cemani Cost?

Just one of these chickens will cost you anywhere from $2,500-$5,000 depending on the size and health of the animal.

Why Is This Ayam Cemani So Expensive?

There are a few reasons why this chicken has such a steep price. The main one is because they are hard to breed. Hens sometimes have trouble laying eggs and will only produce about 80 eggs per year. An intriguing egg-laying fact about the hens is that once they lay 30 eggs, they will take a break from egg-laying for about a month, and then start back up again.

This chicken is only native to Indonesia so it’s very rare to find it anywhere else in the world. While a few could once be found in Europe, consumers were so obsessed with the chicken that it caused its population to quickly dwindle. Because of this geographic problem, shipping meat and eggs to various countries can be very pricey, something which causes consumers to have to pay quite a bit of money for them.

Despite their rareness, the Ayam Cemani is in high demand. While there are plenty of breeders, it can be difficult to produce an abundance of Ayam Cemani because genetics are key. While two of these animals might be successfully bred together, there’s no guarantee that an egg will hatch or be produced.

Why are Ayam Cemani Black?

Ayam Cemani are black because of hyperpigmentation due to a condition called fibromelanosis. Scientists believe that this condition is caused by an excessive amount of pigmentation in the chicken’s tissues. The pigmentation occurs when the EDN3 gene is over-produced. This gene naturally occurs in all chickens, but for the Ayam Cemani, it produces more than is necessary resulting in its vibrant black appearance.
This chicken is completely black, but sometimes their feathers can have a slight turquoise tint to them when shining in the sun.

Are Their Organs Black?

You might be surprised to learn that this chicken’s organs are black. In fact, almost everything about them has black pigment, including their features, combs, wattles, bones, and meat. However, their tongue is either white or gray. They also have very dark red blood, not black.

While their body is completely black, their eggs aren’t. Ayam Cemani eggs tend to have a cream-colored appearance with a slightly pink tint. 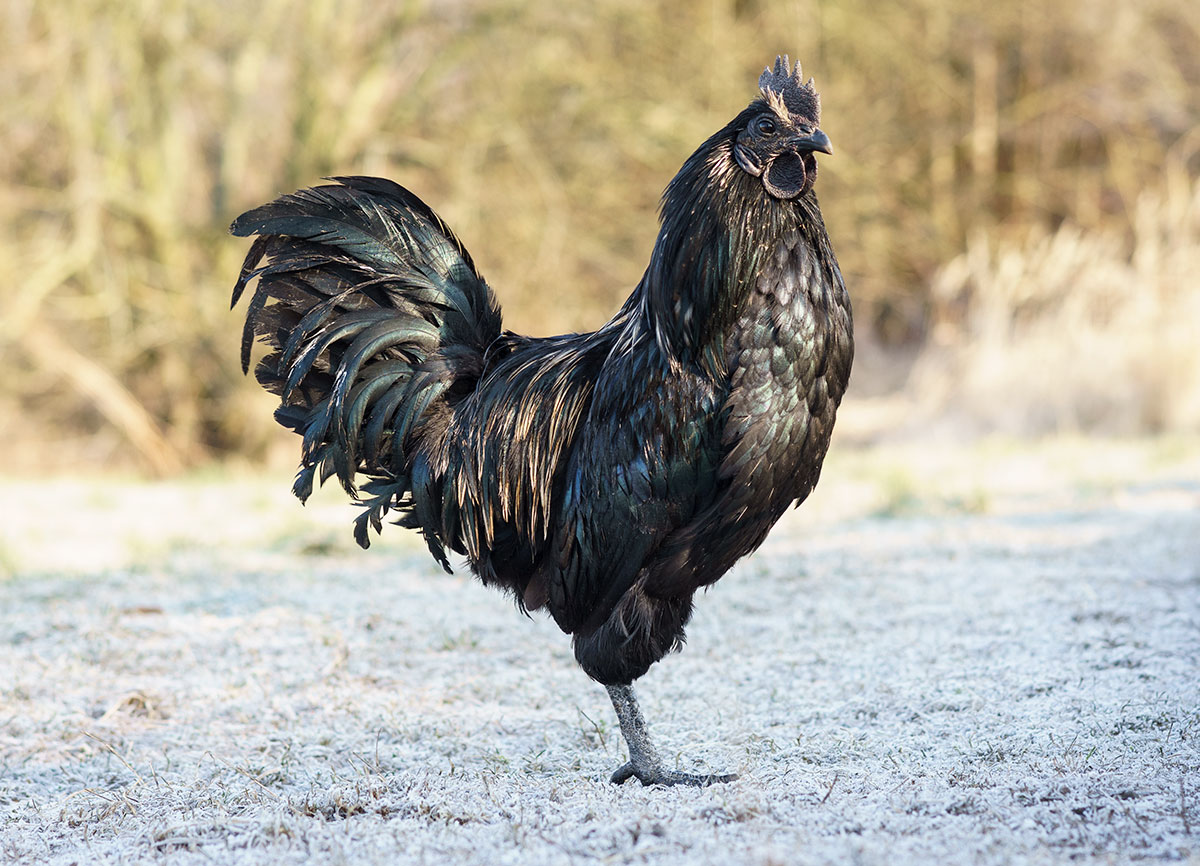 What Do Ayam Cemani Chickens Taste Like? Does the Meat Taste Different From a Regular Chicken?

Ayam Cemani meat tastes like regular chicken meat but many claim it is a bit more savory. It also tends to have a softer texture once cooked making it easier to cut. While some diners might be surprised to find the meat stays black when cooked, this rich pigment is believed to help make it taste even more delicious.

Unlike regular chicken meat, Ayam Cemani meat has been shown to contain numerous antioxidants that help to protect your eyesight and reduce inflammation. It’s also much lower in cholesterol and can boost your body’s protein levels making it a healthy choice to consume.

How is the Meat Prepared?

You can prepare Ayam Cemani meat like regular chicken. Depending on your taste, you might find it good fried or baked. Many chefs believe that preparing the meat with coconut milk and vegetables makes a mouthwatering combination. Thanks to its tenderness, this makes it a popular meat to include in soups and curries.

What Other Chicken Breeds are Expensive?

While the Ayam Cemani is one of the most expensive in the world, there are many others that are just as pricey. The Swedish black hen has a similar appearance to the Ayam Cemani but is domestic to Sweden. There’s also the Sussex chicken which has an impressive egg-laying ability, something which makes it sought-after by many farmers. In India, the Brahma chicken is one of the largest of its kind resulting in a vast amount of meat, sometimes even up to 18 pounds.

All of these chickens are costly, but the second most expensive chicken in the world is the Bresse chicken. The Bresse chicken is found only in France’s Bresse region and costs up to $65 per pound making it one of the most valuable chickens on Earth. This bird is so revered in the country that only a handful of French farmers have the opportunity to raise it, but they must follow strict guidelines. This includes ensuring they receive proper nutrition, have plenty of grass nearby, and are air-chilled after being processed.

While the Bresse chicken is mainly raised for its meat, it’s also used for egg production. This chicken can produce numerous medium to large-sized eggs each week.

Why are Bresse Chickens So Expensive? What Do They Taste Like?

This chicken is high-priced because of its rich heritage and delicious meat. The Bresse chicken is thought to be one of the most flavorful chickens in the world thanks to its juicy and tender flesh. It also naturally contains a bit of oil, something which adds a slightly sweet taste to the meat. Many French chefs like to pair it with cream, mushrooms, and wine because they believe it enhances the taste.

After being slaughtered, the chicken will be placed in a special cotton bag. This bag wraps tightly around their body as a way to help fat inside evenly distribute itself, something which encourages better meat flavor.