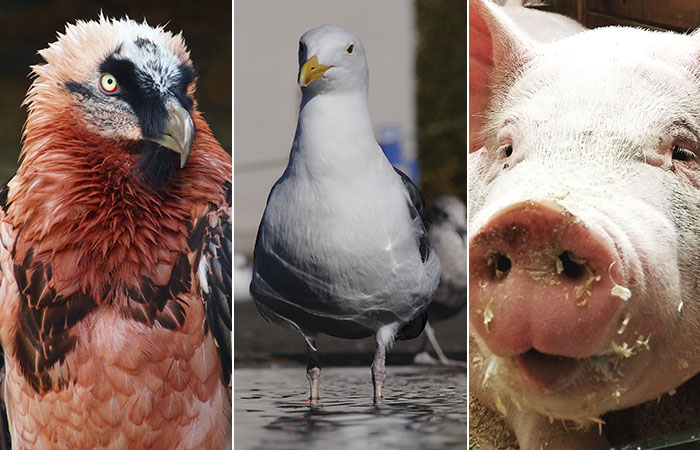 As anyone who studies wildlife knows, you can never learn enough to stop being surprised. Just when you think you are getting a grasp of the incredible variety of strange and amazing animal behavior out there, a scientist will discover something which leaves your jaw hanging open. Here we want to tell you about few of our latest favorite facts. 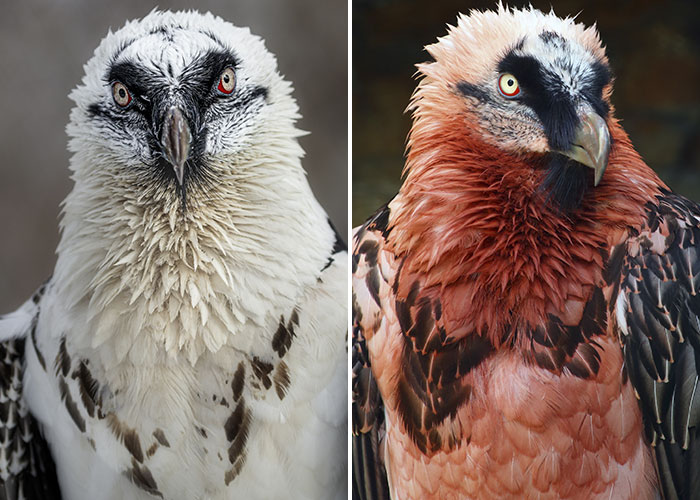 The first object of our fascination is the bearded vulture. It’s an exceptional creature for many reasons. Not because it is the largest bird in the Alps. Not because it was once so feared by locals who believed it snatched lambs and children that it was hunted to near extinction. Not even because it is the only animal alive that has a diet which consists almost entirely of bone marrow (though that fact is definitely intriguing).

No, we’ve become obsessed with the bearded vulture because it is the only bird that wears make up (or, scientifically speaking, cosmetic coloration). In their natural state, these majestic birds are snow white from their chest through to their neck, yet for decades observers have noticed that they often seemed to be stained a rusty red. Scientists speculated about the possibility of it being caused by the birds accidentally roosting near rusty iron deposits in their mountain habitats, but couldn’t prove it, despite a series of studies.

It wasn’t until 1995 that scientists finally got lucky and found that there was nothing accidental about the birds’ adornment at all. In fact, the birds were going out of their way to find rare pools full of iron oxide deposits in the Pyrenees between France and Spain, then bathing themselves meticulously in these pools. Now scientists have worked out the “how” they are racing to work out the “why”, and getting into heated arguments about it. Some speculate that the oxidants in the iron might help to kill bacteria, an occupational hazard for a carrion bird like a vulture. Others have argued that the coloration is a display of dominance to rivals, since the act of finding these rare iron pools requires such fortitude. We intend to watch the debate closely, as it is a truly extraordinary behavior even by animal standards.

Seagulls Have A Rain Dance

Another bird which behaves in a remarkable way is the seagull when it is doing what some have joked is a kind riverdance (see the video below and you’ll understand) but is more often and more accurately termed a raindance. If you’re near the coast you may already have observed a seagull finding a patch of grass and starting to stomp the ground in a kind of tapdancing whir.

Fortunately, in the case of the seagull we know exactly why it is acting in this eccentric way. When humans do raindances they are trying to bring sustenance down from the sky. When seagulls do it, they are trying to bring sustenance up to from the soil. Ingeniously, they have realized that if they tap in this rapid way, the vibrations feel to earthworms much like heavy rain, and as we all know, rain always brings worms to the surface of the earth.

Why do the earthworms rise? It used to be thought that they feared drowning in waterlogged soil, but increasingly experts believe it is because they want to migrate and find moving across a wet surface much easier than a dry one. Whatever the reason, the happy worms hear the patter above them and race to the surface, but are in for a double shock when they discover no rain but do find a seagull’s beak snapping down on them. In fact, seagulls aren’t the only creature to have discovered this devious trick. Thrushes and blackbirds have also been seen attempting it, as have – rather more improbably – wood turtles.

Our third fascinating animal fact takes us away from birds and closer to home, in species terms. Our fellow mammals, pigs, have long been known to show exceptional intelligence. Scientists have proven frequently that they have good spatial memory and strong problem solving abilities, However, a recent paper found that pigs had a mental ability that was surprising – episodic memories.

An episodic memory essentially means that you are able to recall an event and replay it in your mind. Anyone who has ever done anything truly embarrassing and found themselves shuddering when it has popped unbidden into their brain will know the awful power of this memory, but it can also be very useful in preventing us from making the same mistakes again. If you’ve ever climbed a tree and put your hand into a beehive, the chances are that memory will replay next time you are in a tree and make you rather more cautious.

In ingenious experiments, scientists have tested both Yucatan minipigs and the more commonplace domestic pig to establish whether they truly do have episodic memories. In one experiment, pigs were shown a variety of objects in different settings and different arrangements, after intervals. Each time pigs would spend a lot less time investigating familiar objects, no matter where they were placed, showing they recalled having seen them before despite the setting being entirely different. This is striking because it shows that although we commonly think that animal cognition must be entirely different from our own, there may be times it comes closer than we believe.

This is often the way with animal behavior. There are times it can seem tantalizingly like our own, like we may in fact be essentially the same… and then we witness something else which is so foreign and strange we remember how different each species truly is, all living in our own versions of the world. It’s this tension which makes animals so endlessly fascinating.