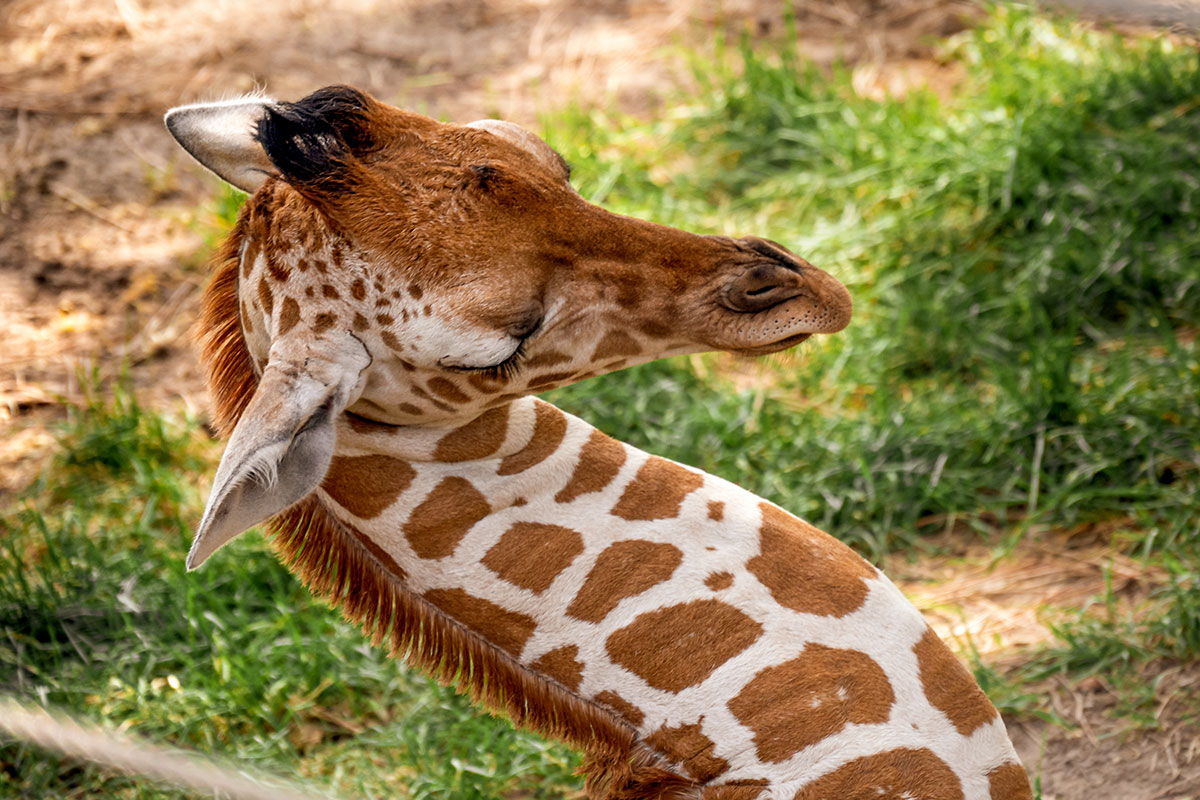 Have you ever had a nightmare where you’re being chased by a monster, and woken up abruptly with your eyes wide, your lungs heaving and your heart racing? If so, you’ll fully understand how our bodies react to danger. Now imagine that you woke up outside, without any doors or walls to keep you safe, and there really was a monster – in fact, several of them – all around you in the dark. And they were there every night. Would you ever go to sleep again?

That’s the plight of the giraffe, one of the strangest and most charming of the animal kingdom’s creatures, and is almost certainly the main reason they sleep in ways that are always strange and always short.

Although they do appear to go almost instantly into deep, REM-sleep, these naps come in very short bursts of five minutes or less. Even in the safe confines of a zoo, 24% of REM-sleep episodes lasted less than a minute. Giraffes are hard-wired to never let their guard down for long.

How do giraffes sleep?

Many animals sleep very differently from humans, since they are at risk of becoming prey, but giraffes have more to fear than most. Their habitats are typically full of predators, many of which are nocturnal and favour sneak attacks, and their very size makes them both a visible target and a highly desirable one, given how much meat they have to offer. No wonder they cannot risk long periods of dormancy.

Most of the giraffe’s naps take place while standing for a few obvious reasons. The first is that the giraffe’s only real defences against attack are either to run, or to kick. Lying down is a highly complex maneuver for giraffes (imagine being forced to try and get into bed while wearing stilts and you can start to imagine), and leaping instantly to their feet at the first sign of an attack is impossible.

So while giraffes do sometimes rest their muscles with a lie down (and look incredibly strange doing so, with their necks typically curled around to rest on their rumps) and a quick sleep, these moments of slumber are incredibly brief. Scientists have observed that on nights with full moons, where visibility is much higher and predators have a bigger advantage, they will take even fewer of these risks, and catch more of their sleep standing.

One other reason giraffes may prefer to stand and snooze is because they are almost always ruminating. This is when a giraffe regurgitates their partially digested plant-based diet from a specialized stomach chamber in order to chew it more and break it further down. This is an activity that is thought to be difficult when lying down.

How long do giraffes sleep?

So how much does a giraffe really sleep? It’s difficult to be sure. Not so long ago, observers believed they didn’t sleep at all, then this was revised to around 30 minutes a day. Now some believe that if you add up all the standing sleeps they may manage to grab around 4 hours in 24 hours.

What other animals need little sleep?

That’s why you probably shouldn’t automatically believe websites which tell you that giraffes are the lightest sleeping mammals, let alone animals. In fact, you don’t have to stray far from a giraffe to find another animal that sleeps even less if a study in the New Scientist is to be believed. Researchers have known elephants were light sleepers for a long time as a result of studies done in zoos or reserves, but thought they might beat giraffes by clocking up 3-7 hours. In fact, in the wild, elephants seem to average less than 2 hours of sleep in 24 hours.

Like giraffes and probably for similar reasons, elephants grab this sleep in short bursts. They lie down for sleep more frequently, however. While they can sleep standing, it isn’t hard to imagine the risk to an elephant (and thousands of smaller creatures!) if it slept too deeply while vertical, its muscles relaxed, and its vast weight crashed to the ground.

One very different quality to an elephant’s sleep seems to be that they will often go several days without any sleep at all, as they travel huge areas in search of food. The elephants don’t appear too distressed by the lack of shut-eye, given that when they did get an opportunity for a safer place to slumber, they rarely tried to make up for lost sleep during long migrations.

Can we say definitely which mammal sleeps the least? Not exactly, but marine mammals are certainly contenders. After all, a deep sleep in the sea is even more dangerous for a dolphin than a slumber near a tiger is for an elephant – the elephant might get eaten, but the dolphin will certainly drown.  That’s why they have evolved a kind of sleep called ‘unihemispheric’ or one-sided sleep. This is an extraordinary evolutionary maneuver where the dolphin shuts down one hemisphere of their brains and corresponding eye, while the other half of the brain and eye stays alert.

This allows dolphins to slumber but still come to the surface to take breaths and also stay on the watch for predators. Sometimes dolphins swim while in this weird sleep mode, at other times they float around in an activity called “logging” for obvious reasons. So, in one sense, dolphins never fully sleep at all.

Once we stray out of the mammal kingdom, things become altogether stranger and more complex. While it’s not strictly true to say sharks, for example, do not sleep, as has been a myth in popular culture for a while, they do certainly cycle through active and inactive periods which perform a similar function. It is also true that many species do need to swim constantly to survive.
Back on land, many birds also appear to sleep very differently.

Alpine swifts are the most obvious example. During their six month migration from Switzerland to West Africa they are in flight mode continuously and have never been observed landing on treetops or land to rest. However, research has shown that there are periods where the birds appear – like sharks – to go into “slowdown” periods where they don’t flap as much, which may be the avian equivalent of power naps.

It does seem that all creatures, no matter what challenges they face, do require some kind of rest which is sleep equivalent, but that lives lived in a constant state of peril mean they have to take it where they can. So next time you are lying in bed struggling to sleep, try counting giraffes instead of sheep. It might not work, but hopefully it will make you feel a bit better about whatever shut-eye you do get.

How Do Giraffes Mate?