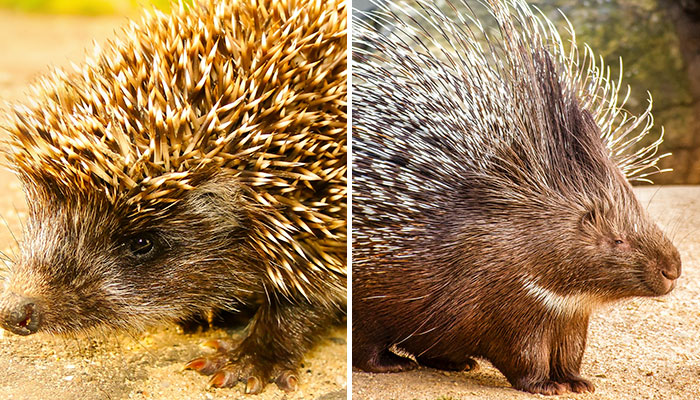 At first glance, hedgehogs and porcupines might look similar, but they are quite different from each other. These animals not only vary in their sizes, but have a different diet, defense skills, and habitat. This article will explore some of the major differences between them and how you can tell them apart.

Is a Hedgehog Related to a Porcupine?

Despite their similar appearance, hedgehogs and porcupines aren’t related. Hedgehogs belong to the Erinaceidae family and are native to certain areas in Europe, New Zealand, Africa, and Asia. Porcupines belong to both the Hystricidae and Erethizontidae families and are native to North and South America, Asia, Europe, and Africa.

Differences Between Hedgehogs and Porcupines

• Porcupines have much longer quills compared to hedgehogs.
• Hedgehogs are slightly smaller than porcupines. They measure only 12 inches long while porcupines can reach up to 15 inches long.
• Unlike porcupines who only eat plants, hedgehogs are carnivorous.
• A hedgehog can grow to be 4-12 inches long while porcupines grow anywhere from 15-18 inches long.
• A baby porcupine is called a porcupette and a baby hedgehog is called a hoglet.
• While both are mainly nocturnal, there are some hedgehogs who venture out during the day.
• There are over 17 different species of hedgehogs and 29 species of porcupines in the world.
• Hedgehogs have poor eyesight so they rely mainly on their sense of smell and touch to find food.
• Some hedgehogs hibernate, but most do not. However, most porcupines don’t hibernate. Instead, they’ll sleep for long hours but venture out a few times during the cold days to find food. 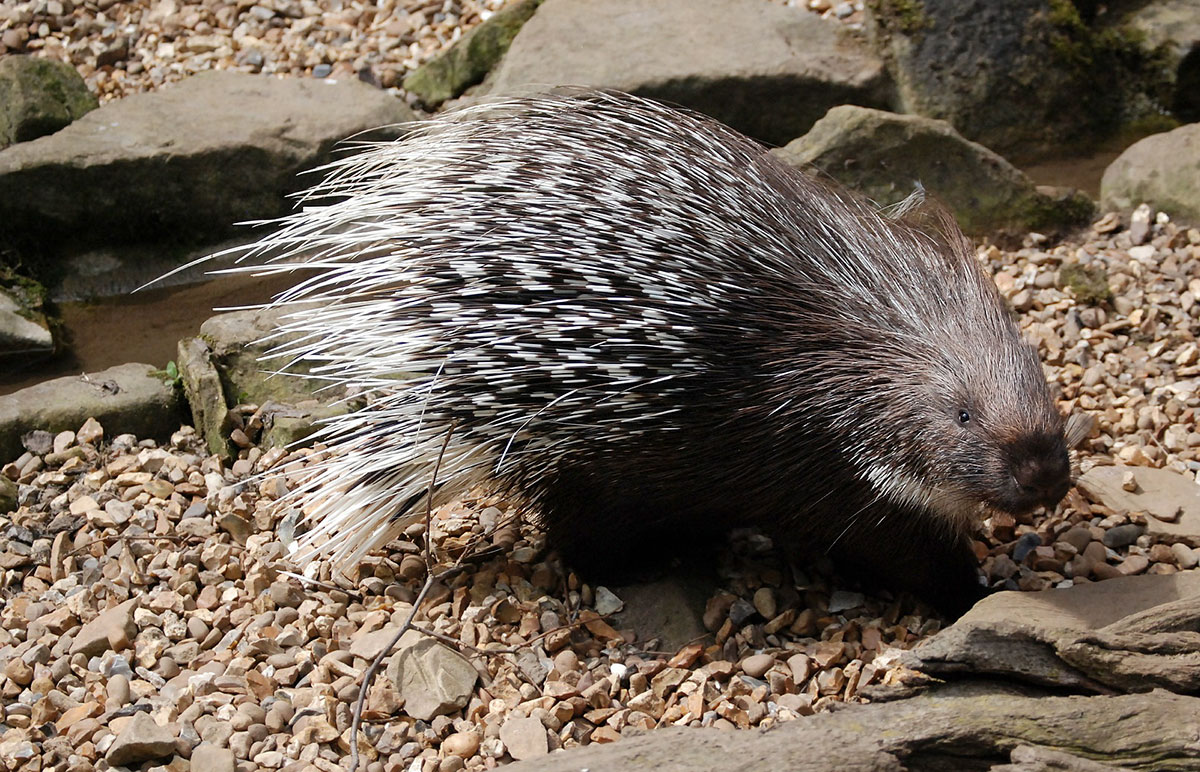 Both of these creatures have very different habitats. Hedgehogs enjoy numerous types of spaces and can be found living in forests, deserts, and savannas. When they find a spot they’d like to live in, they will burrow underground.

Porcupines live in forests, hillsides, deserts, and rocky coves. They don’t create burrows like hedgehogs, but will rest inside hollow logs, behind rocks, or in small crevices. Some might also climb into trees to rest on their limbs, but this is somewhat rare.

A hedgehog is carnivorous so its diet includes things like caterpillars, worms, and beetles. Some might also try catching baby birds or frogs. While a few will nibble at fruit or vegetables, they mainly eat meat.

On the other hand, a porcupine loves plants and can often be found munching on wood. They’ll also scavenge the ground for fallen fruits, nuts, seeds, grass, and leaves. Unlike some animals that can wreak havoc on their habitat due to their heavy appetite, porcupines actually help the environment. Because they eat old wood, they clean up spaces which can be very beneficial in forests. In addition to this, their droppings act as fertilizer which can encourage new plant growth. 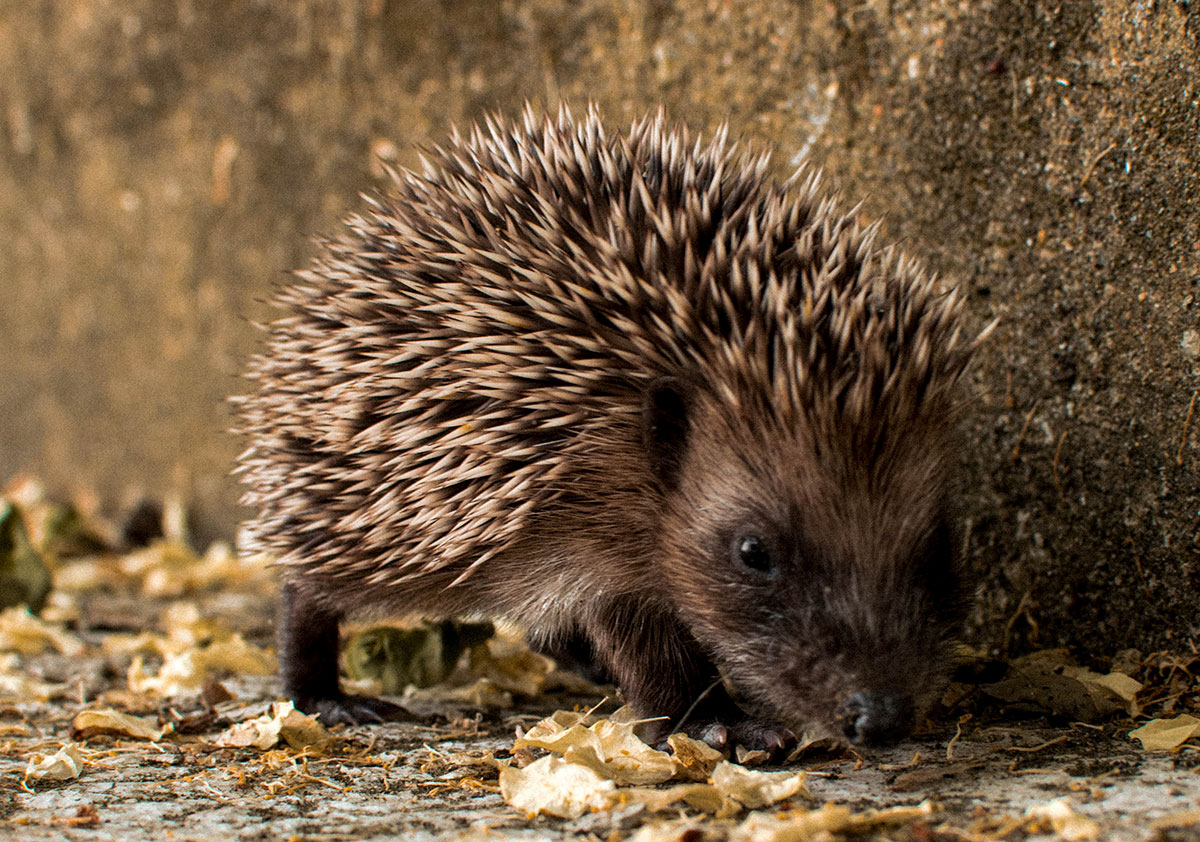 Both of these animals need to watch out for certain predators. For hedgehogs, their biggest nemesis is owls. Because this bird can hide in the trees, it’s able to spot hedgehogs wandering on the ground and quickly swoop down to catch them. Other hedgehog predators are foxes and wolves.
A porcupine also has many similar predators to hedgehogs. These include foxes, wolves, owls, bobcats, and cougars. However, the one main problem for porcupines is fishers. Fishers will scratch at a porcupine’s face to try to get it to turn over so they can bite into its vulnerable side (the area without quills).

To defend itself, a hedgehog will shoot its quills up so that they cross over each other. This creates a strong shield over their body. The hedgehog will then roll itself tightly into a ball to protect the underside of their body which isn’t covered in quills. To prevent being caught while sleeping, a hedgehog will also roll itself into a ball. This will give them a better chance of surviving an unexpected attack. Some might also make hissing sounds to mimic a snake if they’re being threatened.

If a hedgehog or porcupine loses its quills during an attack, new ones will quickly start to grow in. These are usually referred to as successor quills and they will grow to full length within a few days.

A clear difference between a hedgehog and a porcupine is their quills. Porcupines have much longer quills compared to hedgehogs and can reach up to three inches long. Hedgehog quills grow to be about one-inch long.

Another quill difference is the amount on their body. Hedgehogs are believed to have about 5,000 quills on them while porcupines have over 30,000 quills.

You’ll also find that how they use their quills differs. While the quills for both of these animals will naturally fall out over time, hedgehogs can’t shoot them out their body like porcupines can.

Hedgehogs usually give birth to about four to seven hoglets once per year. When born, the hoglets weigh about one ounce. While most female hedgehogs immediately care for their babies, some new mothers might attack them, especially if they are stressed.

A porcupine can give birth to up to three porcupettes. A porcupine has a gestation period of 112 days which is considered to be one of the longest in the rodent family.
Both of their offspring are born with soft spikes which eventually harden into quills a few hours later.

Can They Be Domesticated?

Both of these animals can be domesticated. However, this can sometimes be a little challenging. For instance, porcupines can be trained, but if you try to be too affectionate with them, they could become violent. Because of this, they aren’t often kept as pets.

Many people keep hedgehogs as pets, especially African pygmy ones. These animals tend to have a very calm personality unlike porcupines making them ideal pets. However, they do have a few quirks about them you’ll need to consider. The first is that they are high maintenance. You need to ensure that they have the correct housing, food, and space requirements so they stay happy and healthy. In addition to this, while usually docile, they can have very complex emotions that are often difficult to interpret. Keep in mind that some places don’t allow hedgehogs as pets. For those that do, you might need to obtain a permit.

Hedgehogs and porcupines look and sometimes act very similar, but they are different in numerous ways. Not only do they have a contrasting diet, but unique defensive skills as well.