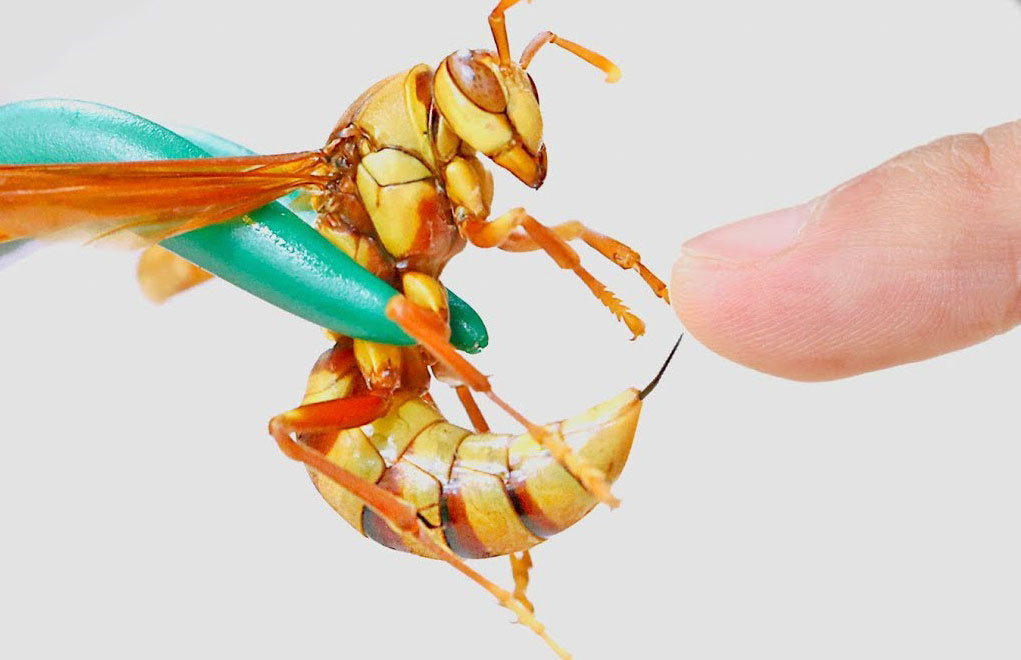 An executioner wasp has an excruciating sting, something which is believed to be one of the most painful in the world. If stung, it can leave behind some nasty side effects.

All About the Executioner Wasp

The executioner wasp is one of the largest members of the Vespidae family. This insect measures about one-inch long and has a long yellow body with brown stripes wrapping around. It’s mainly found in Central and South America.

Most executioner wasps live in trees but will also create nests in small corners, especially in home roofs. They are usually non-aggressive and will only sting if taunted.

Before we get into how painful the executioner wasp sting is, we need to learn how we can quantitatively measure it’s sting. Enter the The Schmidt Pain Index, which was developed by Justin Schmidt, an entomologist. He wanted to create a plan that would categorize the hemolytic properties of venom. The pain index begins at 0 and ends at 4.

The current king of the Schmidt Pain Index is the bullet ant.

When a bullet ant strikes, it feels as if you’ve been shot with a bullet, hence its name. Side effects from a bullet ant sting can last for up to 24 hours. Justin Schmidt describe the sting of a bullet ant as like ‘fire-walking over flaming charcoal with a 3-inch rusty nail grinding into your heel.’

However, a YouTuber by the name of Coyote Peterson posted a video where he deliberately stung himself with an executioner wasp. After many minutes of screaming, yelling, rolling on the ground and writhing in pain, he proclaimed the executioner wasp as the the most painful sting he has ever experienced and even more painful than that of the bullet ant and the tarantula hawk. He went on and described the sting of the executioner wasp as ‘flesh being peeled back.’

What Makes the Executioner Wasp Sting So Painful?

The executioner wasp’s sting is so painful because of the venom it pushes into your skin. Most of the time, this insect’s venom will contain a high amount of histamines, mast-cell degranulation proteins, and norepinephrines. All of these combined together end up causing necrosis which kills cells around living tissues.

What Other Animals Have Painful Stings?

While not an aggressive insect, if you unleash the fury of an executioner wasp, you’ll be in for a nasty surprise. Its sting is ranked one of the most painful in the world due to its unique venom and severe side effects.

Related: Coyote Peterson gets stung by a bullet ant

How Painful is a Warrior Wasp Sting?