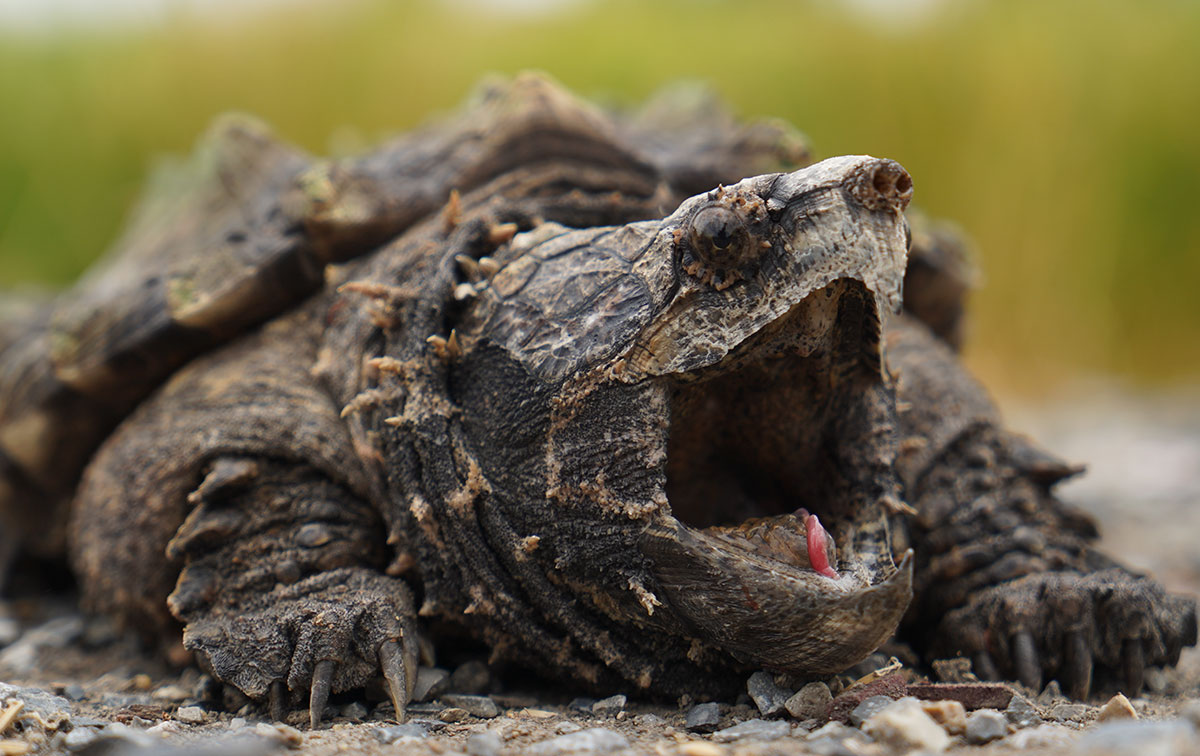 While their name might make them sound menacing, snapping turtles are very docile creatures. They won’t attack unless provoked or if they feel vulnerable.

Snapping turtles aren’t usually dangerous, but you should avoid being around them in the water. They won’t attack swimmers, but if they feel threatened by you, they might try to chase you out of the area.

Because snapping turtles feel confident in the water, they don’t usually bother swimmers because they know they can get away quickly. However, if walking on land, they are more susceptible to attacks. Due to this, they might be a little flustered and trying hard to stay alert which could make them a bit aggressive.

How to Identify a Snapping Turtle

It can be a little difficult at first to differentiate a snapping turtle from a regular one, but there are a few ways you can do so. One is by looking at their tail. A snapping turtle will have a much longer one which can reach anywhere from 8-18 inches.

You can also look at their head. Snapping turtles have a gigantic skull that features a keratinous beak. This beak is slightly curved and has a pointed end.
Besides these, a snapping turtle’s shell is also unique. Despite them having a large body, their shell is somewhat small. Because of this, it’s unable to provide them with protection so they don’t hide in it like other turtles.

If you notice a turtle with these characteristics, it’s probably a snapping turtle.

Where are Snapping Turtles Found?

Snapping turtles are native to North America’s East Coast, especially in Georgia and South Carolina. They enjoy living in shallow freshwater areas, such as streams, ponds, and lakes, that are filled with mud and sand. Snapping turtles enjoy burrowing into these substances as a way to protect themselves from predators and to cool off.

Can a Snapping Turtle Bite a Finger Off? How Strong is Their Bite?

In general, it’s believed that regular snapping turtles have a jaw strength of 226 Newtons of force. While not the most intense compared to other creatures, it can be very painful and could break one’s finger or tear the skin around it.

Has a Snapping Turtle Ever Killed Someone?

There are no records that indicate a snapping turtle has ever killed someone. However, there are numerous reports of them tearing off pieces of skin or breaking bones.

Tips for When Swimming Around Snapping Turtles

Is it Safe to Pick Up a Snapping Turtle?

It is safe to pick them up, but you need to be cautious when doing so. Lifting them up incorrectly not only causes them to become irritated, but could injure the turtle.

To safely pick up a snapping turtle, you want to make sure you are standing behind them. Then, grab onto the back of their shell with both of your hands. Make sure you have a good grip on them because they will try to squirm around.

Gently lift them slightly off of the ground, but keep them close to it in case you accidentally lose your grip. As you move them, try to keep their face away from any body parts as they will twist their neck around. If your hands or face is close to them as they do this, they will try to bite you. Once you’re done transporting the turtle, gently place them back on the ground.

Snapping turtles are gentle creatures and aren’t usually dangerous. However, if you aggravate one, you risk getting a very nasty injury from their strong jaws.