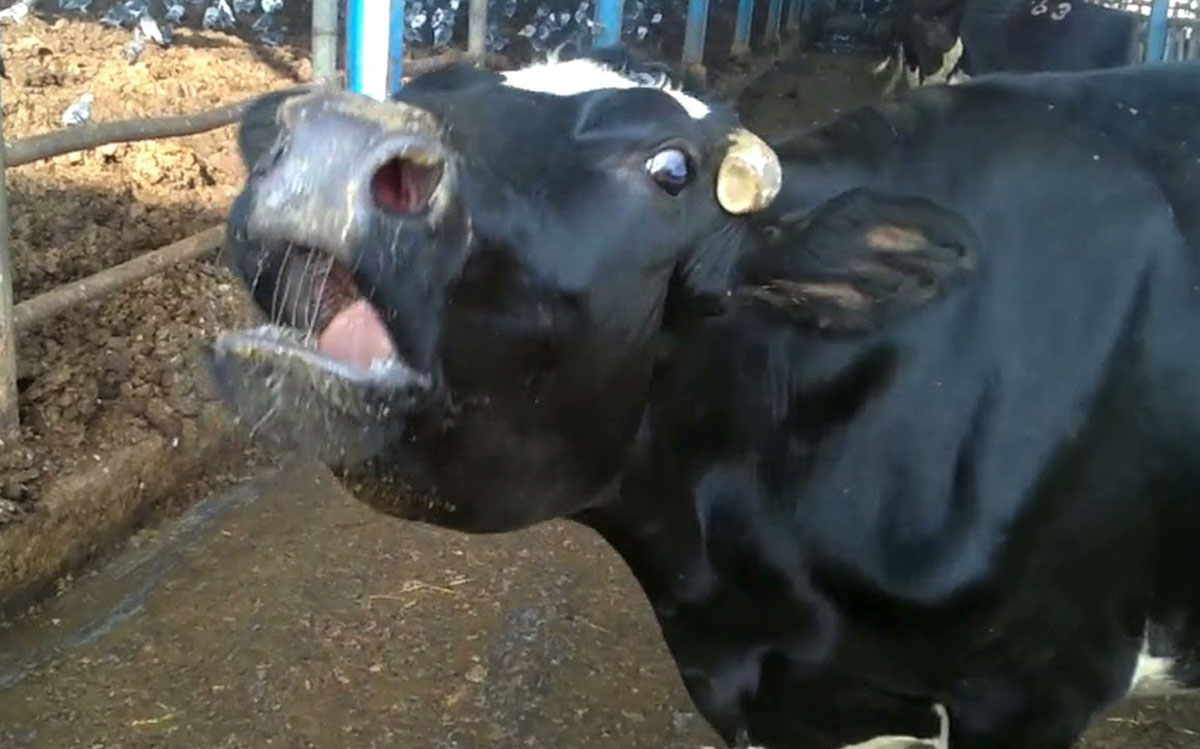 While cows have been revered in many cultures throughout history, and remain so by Hindus – there’s a reason why we use the term “sacred cow”, after all – it’s fair to say that western cultures haven’t been as respectful. When we describe a human as “bovine” (meaning cow-like) we aren’t generally being kind, but accusing them of a particularly dull and witless nature. Most of us only ever see cows standing near motionless in fields and staring vacantly as they chew grass, and think that there can’t be much happening behind those big staring eyes.

Well, we’d be wrong. In fact, cows are much more intelligent than we give them credit for and far more emotionally sophisticated. Farmers – and slaughterhouse workers – have always known this, given that they spend a lot more time with cows than the average person, and in recent years they’ve taken to the Internet to share their experiences with the world. Do a little Googling or scanning through Reddit boards and you will find reams of tales of loving cows forming close bonds with each other and with their human masters.

Cows have best friends and become stressed if they are separated

Of course, there is always a danger of making false assumptions when we anthropomorphize an animal, or try to understand it in terms of human behavior or feelings, but science has also backed up the fact that cows feel emotions. Researcher Krista McLennan of Northampton University conducted a study in 2011 which confirmed through measurement of cortisol levels and heart rates what many farmers had said anecdotally, that cows form close bonds with each other and become stressed if they are separated.

To conduct the test, cattle were penned in on their own, with a close companion, or with a strange cow they did not know for 30 minutes, and their heart rates then measured at 15-second intervals. Cows who were penned in with a “friend” showed measurably less distress. As McLennan said of the experiment, “When heifers have their preferred partner with them, their stress levels in terms of their heart rates are reduced compared with if they were with a random individual.” Many farmers also remark on the complexity of cattle social orders, noting that within any herd there is a pecking order that results in cows coming into the milking parlour every night in more or less the same position in the queue.

What kind of emotions do they feel?

Others have observed the emotional range of cows and the physical signals which reveal their current state of mind. Relaxed ears indicate that the cow is also relaxed, and can often be persuaded into playfulness. Eye whites are another emotional indicator. Cows display fear and anxiety, and in these states show a lot of eye white. When cow mothers are separated from their calves there is an increase in the amount of eye white, revealing significant capacity for separation anxiety and simple worry.

This situation is, sadly, all too common. Almost all calves are separated from mothers within hours or days of birth on dairy farms. This allows farmers to sell the milk that the calves would otherwise drink, but has become a matter of controversy with animal rights supporters. This has led to a new sector emerging, calling itself “ethical dairy farming”, where calves are not removed instantly from mothers. This movement has been given extra momentum by emotional tales of mother cows “crying” when they are separated from their calves, as described by a farmer from Scotland called David Finlay who said some mothers would “bawl for days”.

Another emotive case happened in China earlier this year when a pregnant cow in a slaughterhouse was caught on video appearing to sink to her knees to plead for the life of her and her child, with what looked like tears in her eyes. The video went viral and soon led to animal rights lovers paying the owner to save the cow and remove her to the safety of a local temple.

Whether cows really do cry or not is a subject of heated controversy online. Some farmers insist that they do, while others reply with equal force that they do not and that any water in a cow’s eyes is simply a matter of external irritation. However, even those who insist that a cow’s tears are no more emotionally meaningful than a crocodile’s still admit that mother cows are often deeply distressed when their offspring are taken and will call for hours or days afterwards. In either case, the emotional depth of cows is revealed.

The distress of these mothers can often be heard at night by those who live in the proximity of cattle, when they will call out forlornly through the dark hours. However, there are other reasons why cows may call during the night. One of the most common reasons is because they feel threatened, either by a person or predator, and their moo acts as both a cry of fear and a warning to other cows nearby. Sometimes it might mean they are hungry or lost. It certainly isn’t, as some superstitions have suggested, because they know that someone you know is going to die.

We will probably never fully understand animal emotions, and it would almost certainly be a mistake to compare them too exactly with our own, but evidence has been mounting for many decades that these emotions definitely do exist. After all, humans developed emotions as an evolutionary tool (love is a powerful aid to reproduction and child raising, fear is useful for avoiding danger, etc) and animals are subject to the same evolutionary principles. Cows are no exception, and may in fact have a wider range of emotions than most animals. So next time you see one staring into space in a field, don’t presume it’s because there’s nothing happening between those eyes. Perhaps they’re contemplating the bittersweet nature of existence, or simply irritated by your presence and ignoring you until you go away.