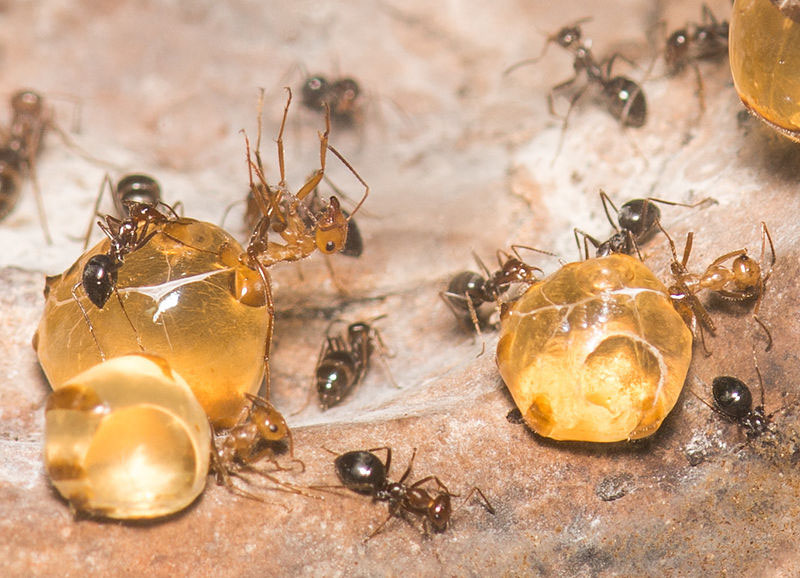 Honeypot ants were first discovered in 1881 by naturalist Henry Christopher McCook. They’re known for being living larders because they store food in special bodily compartments that are used to feed other ants in their colony. If you’re interested in learning more about this intriguing insect, keep reading. You’ll discover many fascinating facts about it, such as why they love honey and the unique way they keep food in their body.

1. Honeypot ants are found in many places throughout the world

Most of the time, they’re located in arid climates, such as Mexico, South Africa, and Australia. Due to their somewhat large size, they’re mainly found inside their nest. This is because it’s hard for them to walk around due to their body swelling. Because honeypot ants live inside their nest for such a long time, they are usually safe from predators which helps them have an impressive lifespan of eight years.

To find a honeypot nest, you’ll need to look carefully for a large crater-like mound on the ground. Once you do, gently dig into the top of it. You’ll soon come into contact with thin vertical tunnels. After finding these, dig a bit more into the ground. Eventually, you’ll find their massive chamber which is filled with honeypot ants. You can take your hand and scoop some crawling around on the ground or pluck some hanging from the top of the chamber’s ceiling.

Because of this, they’ll often be found sipping on honey and plant nectar. Some also consume other insects, including the honeydew aphid.

3. Honeypot ants stores honey as a way to provide food for other colony members.

This insect stores honey as a way to provide food for other colony members. Honey provides other ants with plenty of nutrients to help them stay energetic and healthy.
Some honeypot ants might also use their body to store water. This way, should there be a drought, the colony will be prepared and have the means to survive.
To sum it up, honeypot ants store honey as a way to help them live through scorching temperatures and consistent drought.

To store honey, this ant will place its mouth near the honey source. As it sucks the fluid out of it, the honey will pass through the ant’s body into its abdomen. The more fluid it drinks, the bigger its abdomen will get. Depending on the colony’s needs, the ant will either drink a little or a lot of the honey.

When a colony member needs honey, they will rub on another ant’s antennae. This will cause the ant to regurgitate the honey so the other ant can eat it. If there’s a dry spell, the honeypot ant will consume more nectar than necessary to provide for its colony.

If there aren’t enough honeypot ants in a certain nest to store food, those members might try to conquer a separate honeypot ant colony and carry away its larvae. This way, they’ll have enough workers to survive. 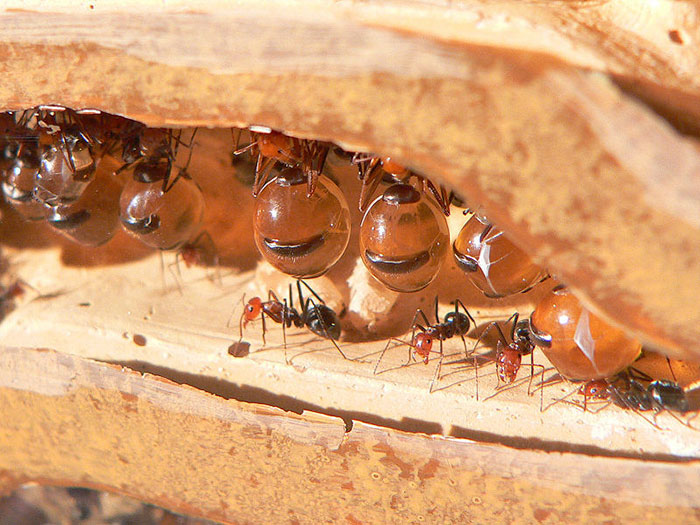 5. Honeypot ants can get as big as the size of a grape

Honeypot ants measure anywhere from ¼ to ½-inch long. However, their size significantly expands when they devour food. Depending on how much honey they eat, a honeypot ant’s abdomen can get to be as big as a grape.

6. Honeypot ants fits into one of three categories: replete, plerergates, or rotund.

A replete ant is a worker in the honeypot ant colony. When they eat nectar, their abdomen swells. If other ants need some of this stored nectar, the replete ant will regurgitate it for them.

This type of ant is sterile and has only one job – to store food for other members when food becomes scarce. When necessary, they will fill themselves with honey or nectar and hang from the top of the colony’s nest. Over time, other workers will take food from them to survive.

A rotund honeypot ant is similar to the plerergate ant. As its name suggests, when it swells up with food, its body will take on a round shape. The ant will also help to feed others in the colony when they are hungry.

As the honeypot ant expands, its body might also change color depending on the fluid it’s holding. This includes various shades of blue, yellow, red, orange, and green.

A honeypot ant doesn’t necessarily eat other insects but will swallow dew created by other insects, such as honeydew aphids. If there is a dead insect nearby, this ant will drink fluid from their body. They will do this by poking their mouth into the flesh and quickly removing fluid from it.

This insect is one of the only edible ants in the world and is a favorite treat for some. Those who consume them say they have a slightly sweet taste. However, when toasted, they have a bacon-like flavor. As you bite into their body, their abdomen will explode in your mouth releasing these intricate notes.

Rene Redzepi, chef and owner of 3-Michellin star restaurant, Noma, says honeypot ants were the best thing he ate in 2017.

A honey ant, this was the best thing i ate in 2017. They’re basically overfeed ants, that carry the burden as food storage for the colony, in case of a dry spell. Their abdomen, the size of a small grape is full of a sweet and sour nectar. It’s seriously amazing.

Honeypot ants are commonly eaten by humans not only for their taste, but for their nutrients. Most of these ants contain high amounts of iron, zinc, and potassium. They’re also packed with protein and calcium. While healthy, because they contain sugar, they are mainly eaten as a dessert.

9. Honeypot ants are popular in Australia

Honeypot ants can be eaten anywhere they are native to, but they are mainly consumed in Australia. In fact, this insect was once a favorite of Australia’s Indigenous people, including residents of Papunya who named their territory after this intriguing creature.

The honeypot ant is a unique insect that’s known for its sweet tooth and interesting food storage capabilities. Despite their small size, they have an important job of keeping their colony fed to ensure its survival.