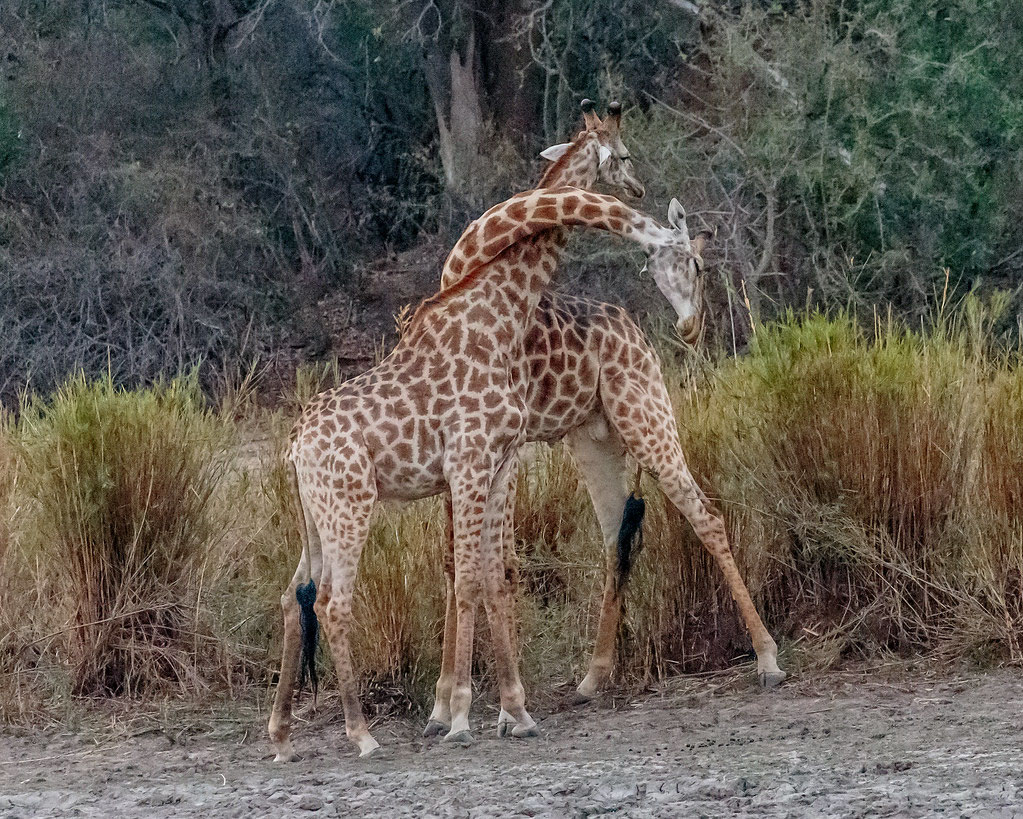 Don’t let giraffes fool you. They might look weird and wonderful enough to put in a list of the 10 cutest animals, with their absurdly long necks and tennis ball eyes, but giraffes are darker and more dangerous than you know. We’ve written before about the awesome power of a giraffe kick, but did you know they could also use those long necks as clubs, smashing at enemies and each other with the hard, knobbly ossicones atop their heads? At moments like these, look more like something from “Jurassic Park” than “The Lion King”.

This clubbing behavior has been called “necking” by some observers, which makes it sound oddly sexual. In fact, clubbing is connected to giraffe’s surprising sex lives, but not in the way it sounds.

These violent fights – captured quite remarkably here, to the gasps and cries of onlookers – are battles for dominance between males, with the victors rewarded with the right to mate and reproduce.

These displays of aggression are so striking that some scientists even speculated that these bouts were the reason that giraffes evolved their long necks, though most experts have now reverted to the more traditional explanation, that it allows them to feed where other land mammals cannot.

But necking is far from the only unusual or controversial aspect of giraffe sexuality. Intrigued? Then strap yourself in for a brief safari around the wild sex lives of giraffes.

When do giraffes reach sexual maturity?

Giraffes reach sexual maturity between the ages of three and five years, although males usually have to wait until they are seven and large enough to win a necking contest before they can actually put that maturity to use.

How do giraffes attract mates?

As soon as they do “come of age”, males will go to great efforts to try and find females who are both receptive to mating and fertile. How the male establishes this latter fact is another strange giraffe quirk. Having conquered any rivals, the male then approaches the female and rubs against her side quite vigorously in a way which stimulates urination. Once the female begins to let loose, the male will taste the urine and establish through secreted hormones whether she is indeed fertile. 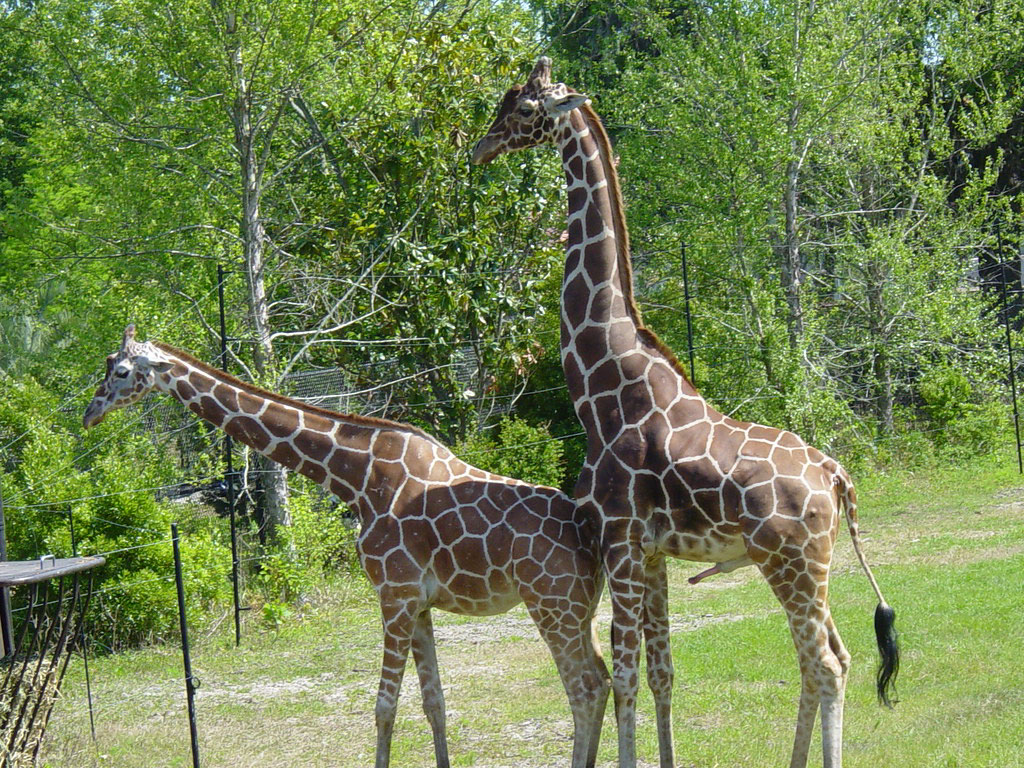 How do giraffes mate?

Then courtship begins, although to human eyes this looks a lot more like persistent and aggressive stalking. Or, even more disturbingly, Michael Jackson’s “The Way You Make Me Feel” video. The male follows the apparently disinterested female around persistently, attempting to mount her and licking her legs. The female keeps moving on until she is finally worn down and stops long enough to allow a very brief mounting and coupling. She’ll then continue to attempt to leave her stalker behind, though he may well repeat the ritual several more times.

Just because the male is persistent in his attentions certainly doesn’t mean he is constant in them. Giraffes are polygamous, which means that the dominant male in a herd will usually mate with all the females who are fertile.

But his sexual interests don’t stop there: male giraffes are one of the most famous examples of animals who display homosexual behaviour.

This has been observed for many decades but leapt to prominence in a paper in 1985 which said that the writers, who had followed one herd, had witnessed just one successful example of heterosexual mating and 14 successful examples of homosexual coupling.

This rather anecdotal study has in the decades since given birth to the rather misleading Internet meme that “90% of giraffes are gay”, a scientifically questionable notion, given that the idea of gayness doesn’t translate easily into animal behavior and suggests an exclusive orientation which is not true. It would be more accurate to say 90% of giraffes are bisexual.

Giraffe’s male-on-male sex lives have even sparked political controversies (what is it about giraffes and scandals?). A member of the UK’s Labour party cited the 90% fact as evidence that being gay is something that happens in nature, only to be attacked by a colleague who said that in fact this behaviour was a display of dominance and aggression, rather than desire or affection.

Animal experts continue to argue the point heatedly, and are likely to continue to do so in the years ahead.

How long is the gestation period for giraffes?

But let’s leave the controversial males behind and conclude by taking a look at the much-loved females. Giraffes are often cited as one of the best mothers in the animal kingdom. After a grueling pregnancy of 15 months, the mother will give birth to a calf that weighs up to a 150 pounds and stands six feet tall. Bigger than most humans, in other words.

The arrival into the world is quite traumatic – females give birth standing up, which means a sudden drop of six feet for the startled newborns – but the mothering instincts kick in quite soon after. Given their long legs and ungainly physique, it takes a long time for a child giraffe to be a confident runner or able to defend itself.

As a result, baby giraffes will normally be protected by their mothers for more than 15 months after birth. When the mother has to look for food, she will either hide it or leave it with other female giraffes in an arrangement called a creche.

Sadly, giraffes generally live in areas with a high number of predators, and baby giraffes are simply too irresistible a combination of defenselessness and large quantities of flesh for big cats in particular to resist. Some estimate that only a quarter of infants survive to adulthood. Those that do are those that stay closest to their mother until they are large enough to run or defend themselves with those incredible kicks.

The female giraffes will typically remain in the herd even after they have reached adolescence, while males will more often stride off to become independent, looking for new horizons – and new females to conquer, and new controversies to kick up.

The Strange Sleeping Habits Of Giraffes, Elephants And Dolphins…Do Dolphins Mate For Life?How Do Hippos Mate?How Do Ducks Mate?How Do Crocodiles Mate?How Do Snails Mate?