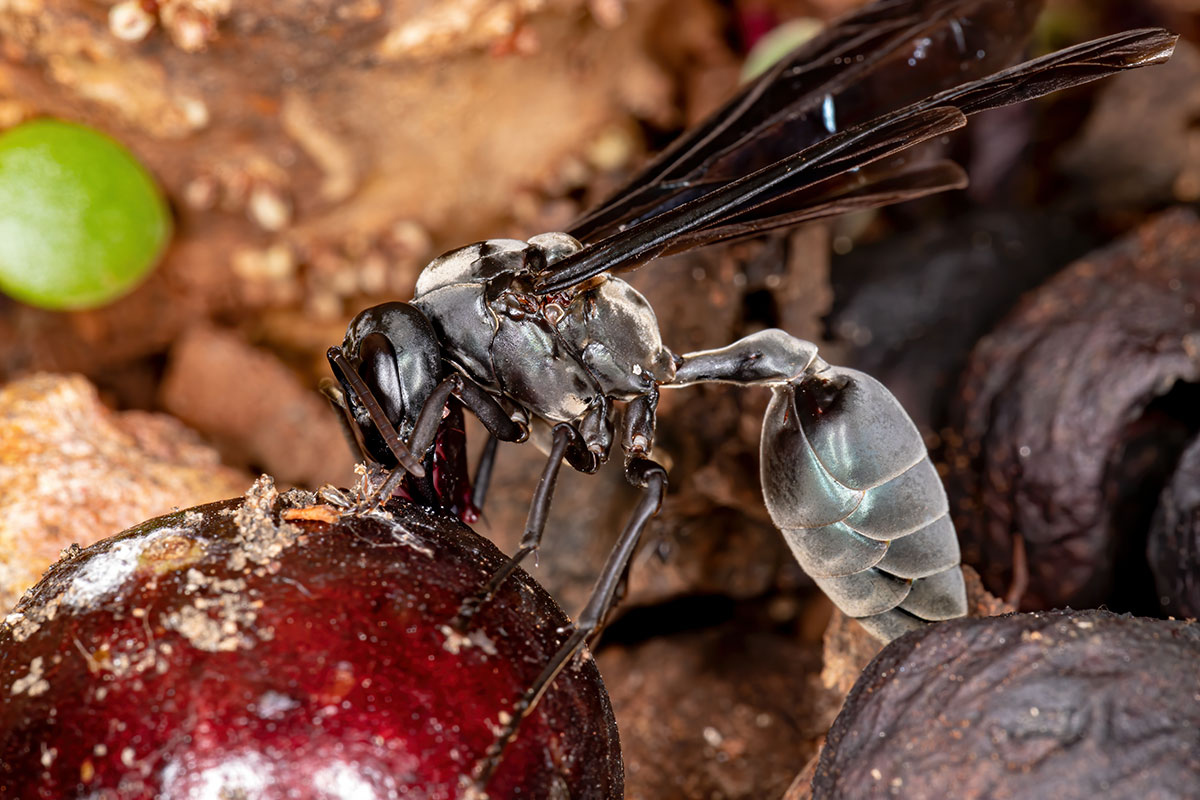 While bees have pretty monikers like “honey” and “bumble” attached to them, wasps come with rather more sinister titles – the “executioner” or the “warrior”. Warrior wasps, which can be found in central or south America, are named after their aggressive behavior, which includes threatening displays of wing-beating and creating a war drum sound by scraping their mandibles on the insides of their nests.

Where Are Warrior Wasps Found?

The Warrior Wasp is found in South and Central American in the tropical rain forests. Known for their “traumatically painful” sting, they have been an insect of curiosity and study as to why their sting is so painful. The species is categorized as swarm-founding and extremely protective of their nests.

The discovery of this dominant wasp species was on a remote island in Indonesia called Sulawesi. A group of Entomologists from The UC Davis Department of Entomology decided to name them after their “ninja-like mandibles” calling them “komodo dragon” of the wasp family with the males of the species measuring two-and-a-half inches long. source

What’s The Difference Between Warrior Wasp And Executioner Wasp?

An executioner wasps, also known as Polistes carnifex, is another type of giant wasp, but it is categorized under a Parasitoid wasp, which is the type of insect that will lay their eggs inside their victims. It is said to be the largest wasp in the tropics. Although both the warrior and executioner wasps can produce one of the most painful stings to mankind, the executioner wasps are not as aggressive.

The executioner wasps, also known as Synoeca, have smaller nests and are not as territorial when it comes to guarding their nests and attacking anything in site that comes near.

Yes, warrior wasps are indeed aggressive. They are known to be extremely territorial over the area of their nests. There are designated watch wasps that when threatened, will create a loud, buzzing sound as a result of the synchronized wing flapping when in protection mode.

The jaws of the warrior wasp are longer than its front legs, producing a painful sting that can last up to two hours.

Warrior wasps are most aggressive when:
• Defending their nests
• Feeling threatened
• Going after prey

A warrior wasp will not come hunt you down unless you cross its territory.

How painful is the warrior wasp sting?

Justin Schmidt is the man that can be thanked for coming up with the sting pain index scale. The scale was created to rate the pain level caused by different hymenopteran stings. Justin is an entomologist at the Carl Hayden Bee Research Center in Arizona. This academic/ scientist/ lunatic deliberately lured 150 insects into stinging him in order to rank them all on a scale from 1 to 4, with 1 being merely painful and 4 somewhere closer to unbearable agony.

The warrior wasp is ranked as a 4 out of 4 on this pain index scale.

He describes the sting of the warrior wasp as "torture, you are chained in the flow of an active volcano.”

The initial sting creates an immediate welp. It is supposedly not as extreme as the bullet ant, but as it sets in it feels like an “ electrical current” going through the area of puncture. According to Brave Wilderness, as time passes, it feels as though he is getting stung over and over again with no relief. The area around the sting swells and becomes taut as the body activates its own defence mechanisms to protect against the phenom. Feeling light headed and the body gets hot. Pins and needles in the arm.

The composition of poison in the Warrior Wasp isn’t specifically poisonous to humans. This doesn’t mean the sting isn’t going to be excruciatingly painful, but a sting is not fatal. Insects are not so fortunate. A sting from a warrior wasp can kill other insects.

Can A Warrior Wasp Kill You?

A single sting from a warrior wasp is not known to be fatal. Those who have a genetic predisposition or the potential to have a bad allergic reaction may experience more danger from a single sting. However, with the aggression and protective tendencies of a warrior wasp nest, if the nest is disturbed, it is not known what several stns at a single time can do to a human.

How Is It Compared To Executioner Wasp Sting?

According to Schmidt, the founder and creator of the Schmidts sting pain index scale, the executioner wasp also rates as a 4 out of 4. There is a different onset and experience of pain compared to the warrior wasp. Schmidt describes it as: “Explosive and long lasting. You sound insane as you scream. Hot oil from the deep fryer spilling over your entire hand.”

What Insect Has The Worst Sting?

The bullet ant is currently ranking on top as the worst sting known to humans. The sting can last 24 hours. These ants are found in the rainforests of Nicaragua and Paraguay. It is said that the long, short stinger can cause a sting that is 30 times more painful than a bee sting.

The bullet ant also ranks at a 4 out 4 on the Schmidts sting pain index scale and was recently described by Real Clear Science as “maybe the worst pain known to man”. Another foolhardy naturalist, Steve Backshall, says: “with a bullet ant sting, the pain is throughout your whole body. You start shaking. You start sweating.”

That doesn’t stop one extraordinary tribe, the Satere-Mawe of Brazil, from using the bullet ant in their initiation rites. Those teenage boys who want to be recognized as true warriors are required to wear gloves filled with bullet ants for ten minutes without crying, an ordeal that can leave their hands black, paralysed and grotesquely swollen.

Fortunately, all the humans survive – one of the remarkable things about the bullet ant’s toxins is that it causes no tissue or nerve damage, and triggers no allergic response. As a result, a person who recovers from bullet ant stings may feel a highly pleasurable adrenaline rush upon recovering, though whether that makes the experience worth it is highly debatable.

Fortunately, the likelihood of a fatal encounter with a single sting from a warrior wasp is very rare. All we can do is thank those like Justin Schmidt, who are willing to take a hit for humanity and test the strength and pain levels of the insects with the most powerful stingers.

Unless you travel to the South and Central America’s, the chances of running into one of these massive wasps is rare. When traveling to these areas, educating yourself about the dangers of being stung and how to care for a sting is very important. Especially, if you or someone you are traveling with has a genetic predisposition or known to have allergic reaction to wasps and bees.

Does The Executioner Wasp Have The Most Painful Sting?