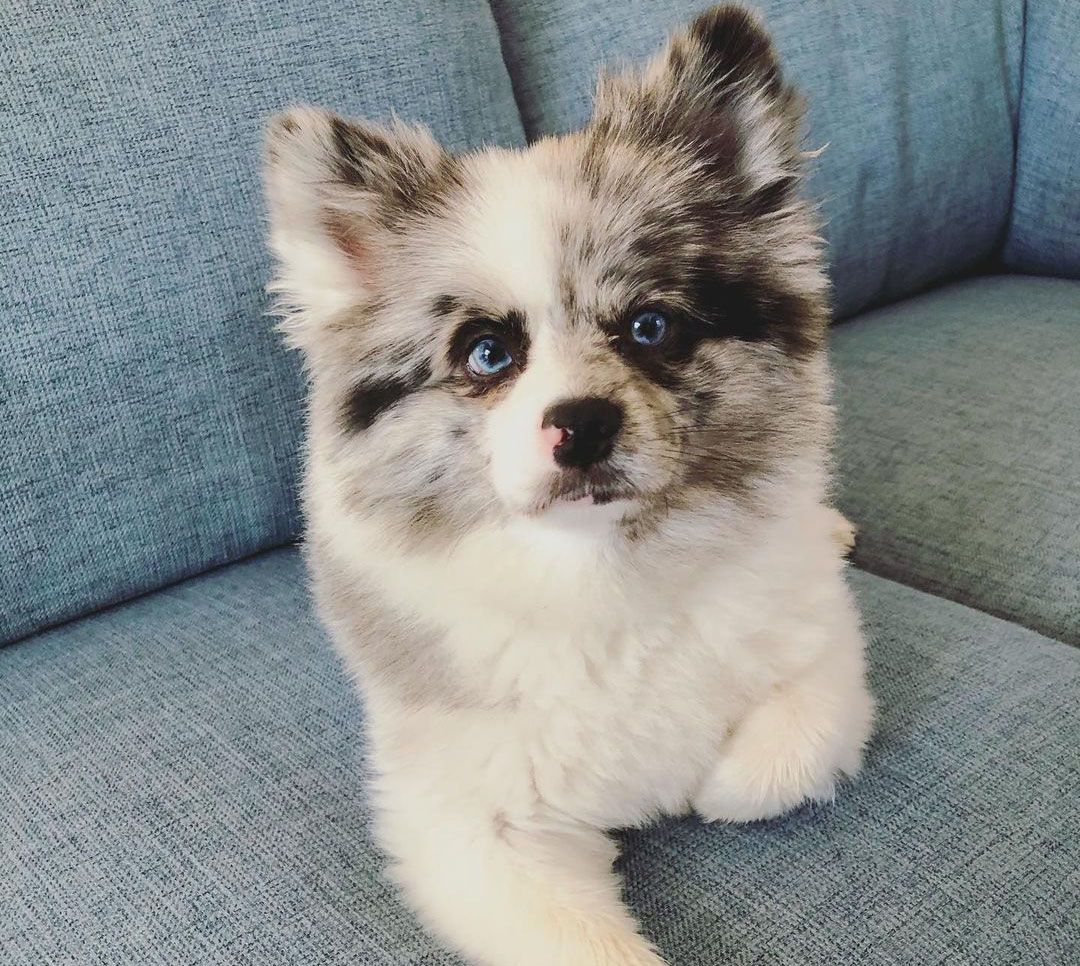 Many people would recognize a merle, but not know the name for it. It’s a unique and beautiful blend of multiple colors that, even on smaller dogs, can really make a canine’s coat pop. Pomeranians especially. With their signature puff, this kaleidoscope of color can emphasize a Merle Pomeranian’s characteristic fur.

1. Merle Pomeranians are distinguished from the rest of their breed solely on their coat.

Simply a subcategory, Merles are Pomeranians through and through. The difference lies solely in their coloring: five to six colors splashed in an irregular pattern often described as mottled or speckled.

They always have a predominant solid base color: usually orange, red, brown, or black. The flecks, specks, dashes, and dots of color that make a merle can be red, white, chocolate, blue, or – in very rare cases – lavender. Some can have large, notable markings which are most common on the neck, chest, legs, and underbelly.

It is possible to be a Parti-Merle, in which case the effect doesn’t cover the whole body, just a small section of a Pom (i.e. a merle head and solid-colored body).

The variation makes it easy to tell dogs apart: no two Merle Pomeranians will ever look the same, even puppies from the same litter, making each dog’s coat entirely one-of-a-kind.

2. Many color mutations, aside from their fur, are expected in these distinct Poms.

Merles can have speckled noses and paw pads – mixes of black and pink skin – that are as unique from other Merles as their coat patterns. Both are present from birth and can not be predicted before breeding.

Like their noses and paw pads, the eyes of Merle Pomeranians also have tell-tale coloring. Some can have heterochromia or two different-colored, mismatched eyes like David Bowie. They are commonly born with light blue eyes, though. Both these mutations occur in Merles and only ever Merles: never in other Poms.

It is possible for a Pom to carry a merle gene but not show it in their fur. For example, a puppy can have a solid coat or slight variation (i.e. beaver, tri-color) and have blue or mismatched eyes. This is a sure sign that the Pom contains merle genes. 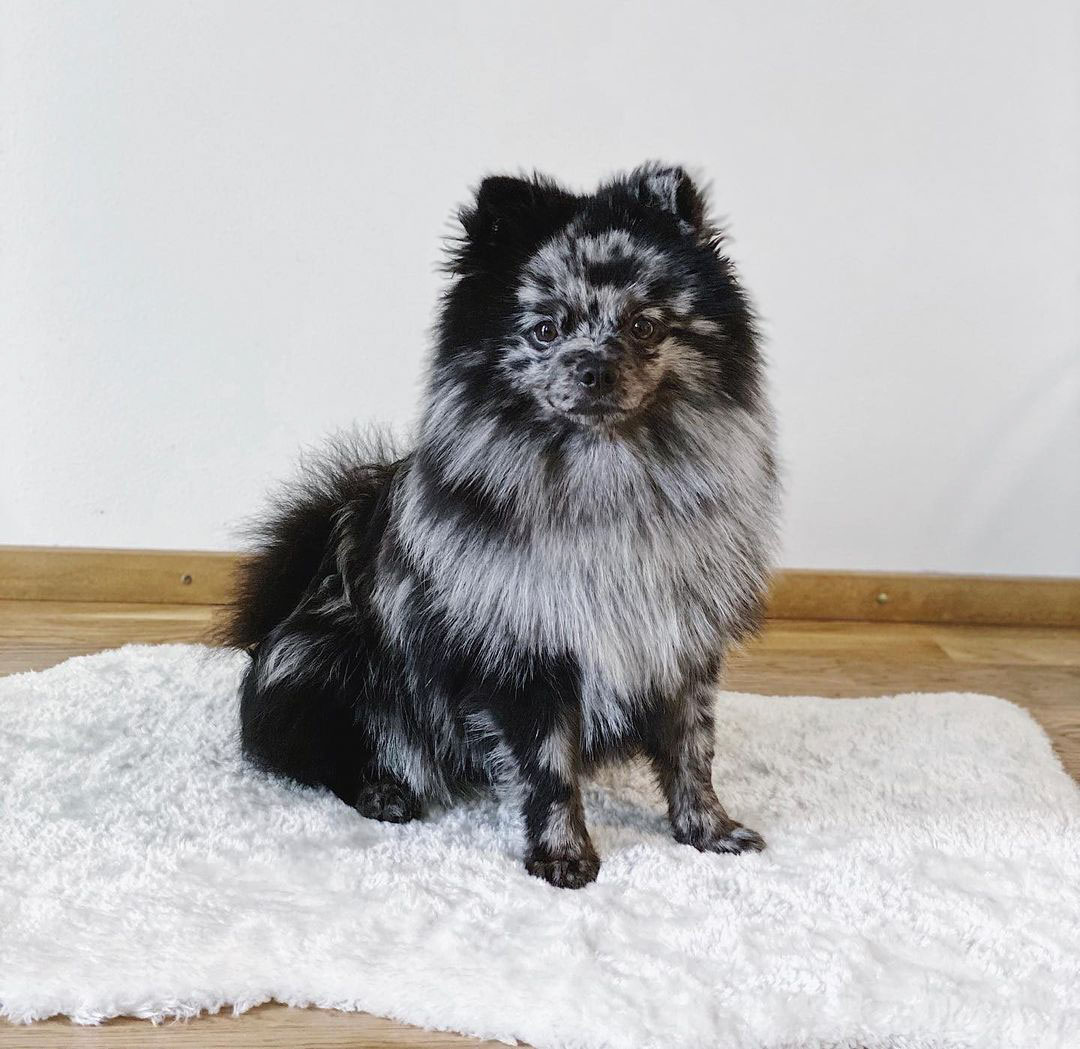 3. It is possible for Pomeranians to contain merle genes and have absolutely no visible proof of it – not even in their eyes.

These are called cryptic or phantom Merles. It takes only one parent to pass the merle gene on, so all Poms (even without a mutated eye-color or speckled fur) should be checked before being mated with a visibly Merle Pomeranian. Breeding two Merle Poms can have adverse consequences for the offspring.

4. Like many breeds, Merle Pomeranians have a list of potential health issues to which they can be subject.

Double breeding is the mating of two Merle Poms, whether they’re visibly Merle or cryptic Merle. In genetic parlance, this breeding is referred to as MM. It is almost guaranteed to incur sight and hearing issues – going so far as to risk both blindness and deafness – in at least a quarter of the resulting litter.

On the other hand, cautiously breeding a verified Merle Pomeranian with a non-Merle (referred to as Mm) is a much safer practice that still produces beautiful dogs with a better chance of being healthy.

The general consensus seems to be that there is no promise of avoiding potential health issues in Merle Pomeranians, be they MM or Mm. This doesn’t mean that every pup will have problems, but that they do have a much higher chance of suffering these specific issues than classic Pomeranians.

5. Most breeders seem to offer Merles as much as they would any other Pomeranian.

Because of the genetic difficulties involved with breeding Merle Poms, it would be almost impossible for a breeder to sell only Merles. It would be a curious thing, but not necessarily nefarious, if they did – maybe they don’t want to sell their other Poms.

This doesn’t make Merles rare, though. A scroll through breeders’ websites shows that it’s common for them to have at least one available. If there are none, many breeders advertise checking in with them about the color Pom you’d like. For example, if they have a litter on the way known to contain merle genes, you may be in luck if you’re willing to wait. It will cost you, though.

As with any pure breed, Pomeranians are expensive. Dogs can start at $1,200 which is a relatively low figure, considering prices can shoot up to a whopping $5,000. For a dog that weighs as much as a fiver, a lot of consideration should go into choosing your new best friend. Another expense to take into consideration is the deposit. Though it does go towards the final cost, it is an expense to bear in mind. These can range anywhere from $100 to $500.

Naturally, Merles cost more for their coats and the special care that goes into their breeding. The average price for one is $3,000. Classic Pomeranians can easily cost the same, especially if they’re AKC registered. Naturally, puppies cost the most. Some breeders offer retired, presumably older Pomeranians that would only cost you between $500 and $1,500. 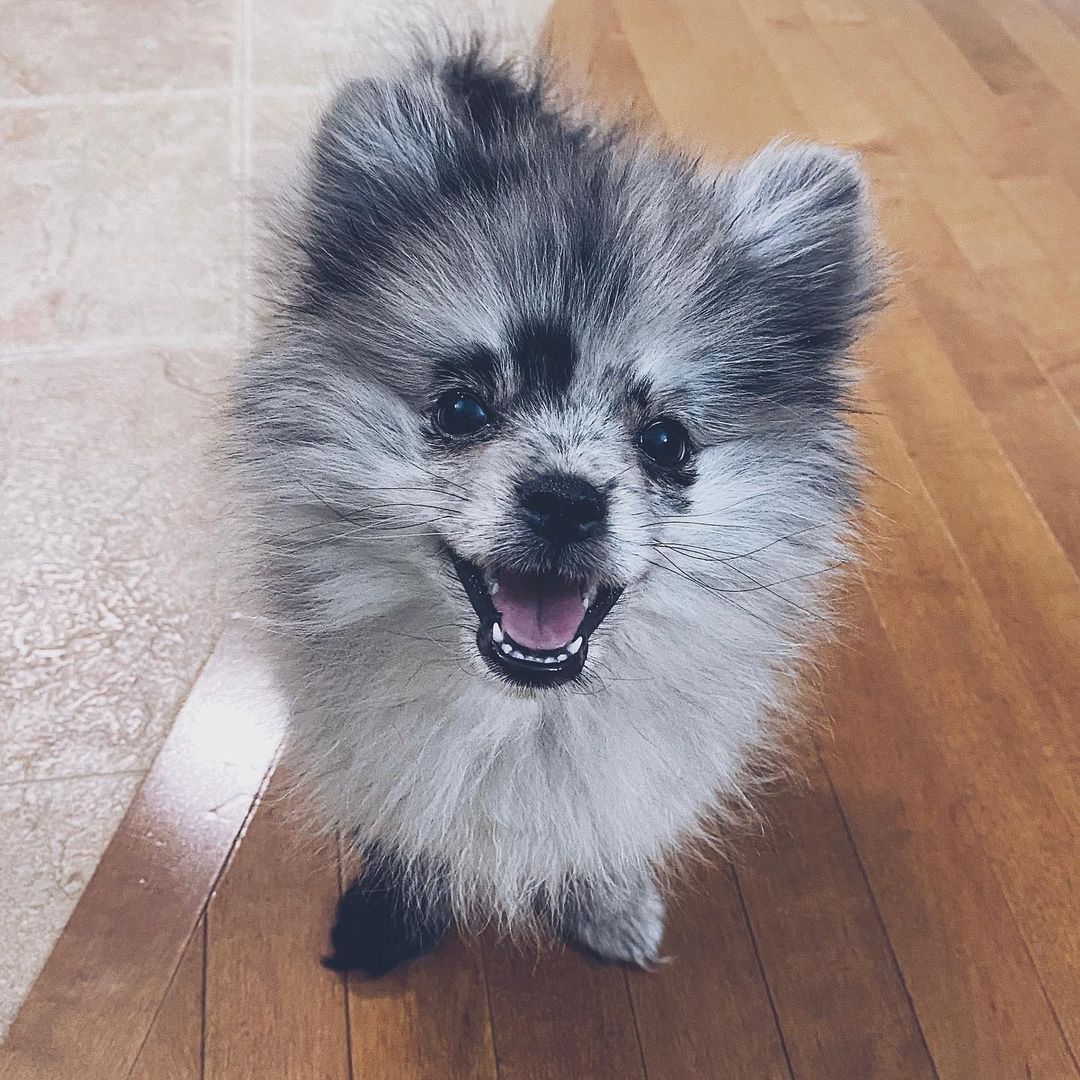 6. The question of ethics lies solely with the breeder.

If they’re a responsible breeder, there’s nothing wrong with buying a Merle Pomeranian. Every breed has its faults. That’s an inevitable result of something natural. The most ethical way to buy a Merle Pomeranian is to love it and be ready to commit to the upkeep of its health, whatever comes your way.

7. The best way to know if a breeder is reputable is by doing your research.

By going through an established society like the AKC, which has its own Marketplace for suggested breeders, you are sure to browse only well-established breeders who keep to the highest standards. It’s good to research the breeder’s history, how long they’ve been in business, and their involvement with the AKC or other reputable societies. Some even offer guarantees or have contracts that protect you as the buyer and promise a happy, healthy friend for life.

The AKC has regular blog posts on responsible breeding, but the biggest tip they give to prospective dog owners is communication: get information from your breeder. Ask them for a history on the parents of the dog and be sure to get any preexisting health test results or vaccination records. All these things are normal to ask. You should not be afraid to double-check for the protection of yourself as well as your future pet. At the end of the day, they are responsible for a living animal and should be patient with valid inquiries.

There’s nothing shameful in wanting to be proud of owning the cutest dog in the world and Merle Pomeranians are no exception. Particularly beautiful with some of the most unique patterns in the canine world, they could make any dog lover happy.