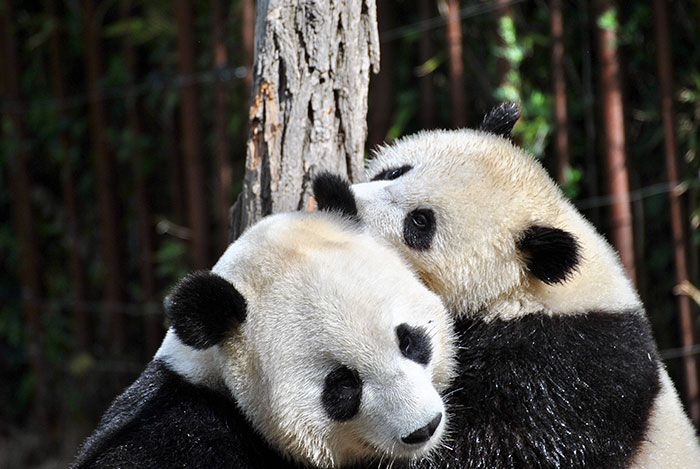 Giant pandas have shorter lifespans than most others of the ursidae family, averaging 20 years.

They come of age any time between 4 and 8 years old, after which the females are sexually active.

Why is it so hard for pandas to mate?

Once sexually active, female panda bears experience an estrus cycle once a year. This cycle is the scientific term for being in heat. It lasts for a mere two to three days in the spring, between March and May, so time is of the essence. Male pandas must make the most of it.

Once they choose their mate, the pair will copulate several times to guarantee fertilization. This limited time frame for success makes increasing population numbers naturally for this endangered species a difficult task.

It doesn’t help that the normal rate of reproduction among pandas is only one birth every two years. This is because a baby panda cub stays with its mother until it is 18 to 24 months old. Once it moves off on its own, the mother panda finally has a chance to go mate again.

Despite it being very common for pandas to give birth to twins, they seldom raise the two cubs. It’s difficult if not impossible for the bear to care for both on her own. The mother chooses which of the two cubs to raise while dooming the other.

They’re not bad at mating, just slow. Between this fact and their dismally dwindling numbers, it’s not surprising to hear that mating pandas, even in captivity, is difficult.

Scientists have struggled with breeding more pandas. Attempts to help increase the species’ population levels have been thwarted in part by the iconic bears’ idiosyncrasies.

In the wild, pandas are usually solitary creatures. They live in isolation and almost only ever meet to mate. Low wild populations mean that pandas would continue to go extinct if not for human intervention.

They’re struggling with the best course of intervention, however.

How do zoos get pandas to mate?

Living in captivity seems to decrease the males’ drive to reproduce. Where’s the challenge? A mistake scientists made in early conservation attempts was keeping the pandas apart until that crucial mating session. The two bears weren’t familiar with each others’ scents. They didn’t have time to perform the same ritual they usually would in the wild. They wouldn’t mate.

A study published in 2015 found that pandas were more likely to copulate with a mate they themselves picked.

After observing bears of the opposite sex from a safe distance, pandas would show obvious signs of preference and even begin a mating ritual. Scientists found success in further encouraging that naturally occurring attraction once mating season began.

This technique has produced mixed results. Another attempt to encourage the bears involved giving the male pandas sildenafil. Street name: Viagra. The results were less than long-lasting and this method was eventually dropped.

One successful artificial method of breeding pandas is a well-known procedure for hopeful human parents.

The first successful artificial insemination of a panda produced a cub in China in 2009. Inbreeding is a threat in a limited mating pool, so scientists used frozen sperm for insemination to mix up the gene pool. Frozen semen gives hope to save pandas from endangered status. Since it can remain frozen for decades, zoos across the world can share it for years to come.

Why Bald Eagles Are Some Of The Most Romantic And Monogamous AnimalsWhy Do Rams Headbutt Each Other?5 Reasons Why You Should Adopt A PetWhy Did Omayra Sanchez's Eyes Turn Black?