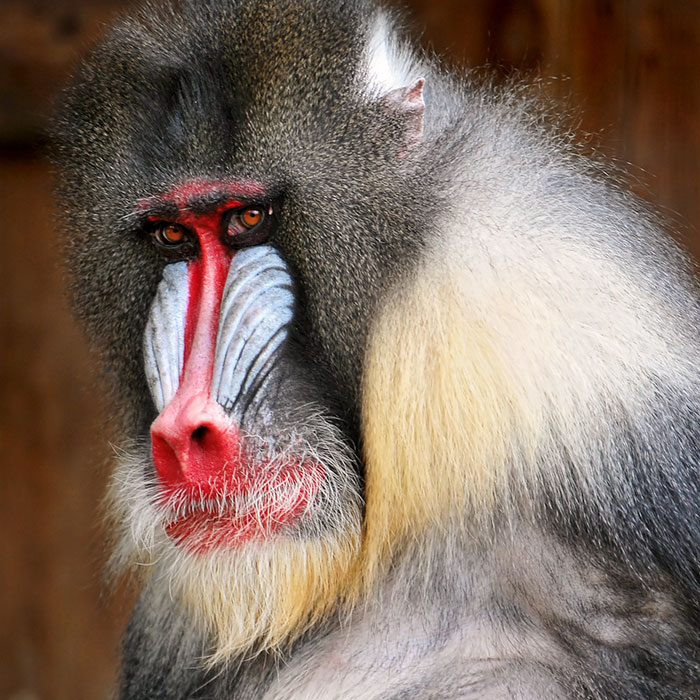 The largest of all monkeys, mandrills are impressive figures best known for their stunning coloring. While every color of the rainbow can be found in all manner of life, even Charles Darwin noted that “no other member in the whole class of mammals is colored in so extraordinary a manner as the adult male mandrills.” In his book The Descent of Man, and Selection in Relation to Sex, Darwin refers to these variegated primates often. Perhaps one of the first to record this species, he certainly paved the way to further study and understanding of them.

For any not up to date on their species of monkeys, the mandrill is best known by its Disney counterpart, Rafiki. Immediately, the image of a distinctly oval face comes to mind. Most memorable is its nose. A shockingly crimson bridge flanked by characteristic grooves spreading onto the cheeks in degrees of blue and violet.

These surprising skin colors come to full permeation only on the males of the species. In addition to their noses, their hindquarters also feature unusual shades from pink to deep vermillion with hints of blue out towards the edges. Almost a mirrored bookend of their face.

The depth of their skin’s peculiar colors depends on the level of testosterone in the mandrill’s body. These primates exist in a strict social hierarchy. The highest alpha male with the highest testosterone levels will have the brightest, most contrasting skin color of any other in the troop. Below him, this trend dwindles. In males with lower testosterone levels, mandrills have considerably more muted colors.

This isn’t a permanent ranking, though. Male mandrills come of age around nine years old but their testosterone levels can change over time. These monkeys are often seen to bear their teeth in a friendly gesture – a smile, if you will. Sometimes the meaning behind these grimaces can turn aggressive. They may stare, slap the ground, and roar at the member of the troop they intend to intimidate. Challenging their position in the troop can help them rise within the hierarchy.

If they challenge an alpha – or even just a stronger male than themselves – and win, their testosterone levels will change in the long run. This will cause the reddish colors of their skin to saturate and become more radiant. Interestingly, the blue tones do not change in vibrance. If the successful challenger becomes the new alpha, its testicles and rear end will permanently increase in size. Their sternal gland will also give off more of the mandrill’s sexual scent, tempting females with a more heady aroma.

This change in power and physical appearance goes both ways: males who relinquish status after losing a challenge from a lesser mandrill will begin to fade, the red coloring in their face and rear dampening. They experience a converse effect in their genitalia, which begin to shrink over time. This causes a decrease in sexual success.

The reasoning for the male mandrill’s characteristic skin colors is the most common in the animal kingdom: to attract a mate. Females are impressed by the most brilliantly colored male. The more vividly colored ones have a better selection of mates and will always sire offspring. As noted, competition is fierce.

The mandrill’s remarkable skin tone serves a second purpose. The bright tones of red and blue seem unnatural in the mammalian class. They are easily identifiable in a camouflaged world – shades of green carpet the jungles the mandrills live in. Their colorful faces help them see each other through the foliage and help keep them from getting lost. Or, potentially warn them of an approaching competitor.