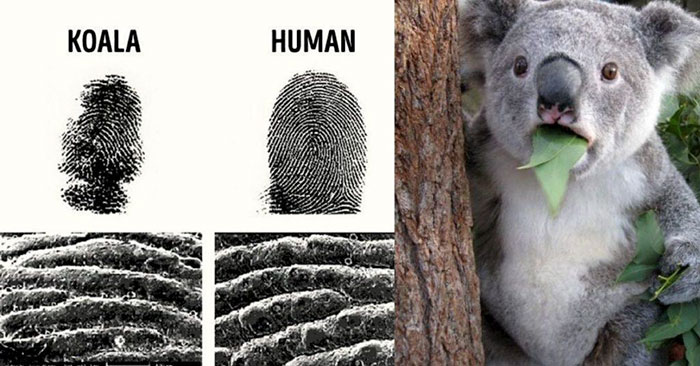 Despite the advancements of science and everything we know about the natural world, the individuality of fingerprints is a still a shocking fact to wrap one’s head around. Every single human being has a unique set of fingerprints. What about others in the animal kingdom?

For the creatures sporting stripes, these coat markings serve as a visual identifier. For example, no two zebras have the same stripes. Marine biologists distinguish sharks by the shape of their fins and notches in them. The species more closely related to humans have proven to have fingerprints very similar to mankind.

Why? When it comes to humans, scientists aren’t too sure. There are a number of reasons that could explain the presence of fingerprints, but don’t definitely explain them. The most assumed evolutionary benefit of fingerprints is grip. All those tiny ridges and intricate lines provide an imperceptibly rough surface that allows for more friction and prevent slippage. This is hardly necessary for humans, whose brains know how to grip something without dropping it. This is a vital skill in the animal kingdom, though.

Fingerprints are also called dermal ridges. Up close, the individual patterns actually look like tiny little valleys. These ridges are an evolutionary boon to animals whose survival depends on how they interact with the world around them.

Chimpanzees are a likely case study for animal fingerprints. Part of the primate order, they share a similar ancestry with humans. It’s been recorded that they, along with their cousins the orangutans, have fingerprints similar to humans.

Like us, no two chimps have the same print. Known tree climbers, these monkeys rely on the safety of the treetops to sleep at night. A dozing chimp can climb deftly up the jungle thanks to their fingerprints. They may not understand the usefulness of their dermal ridges, but we can.

Gorillas, however, don’t need this same skill. Like humans, they live on the ground, and like humans, the purpose of their fingerprints is a bit unknown. Regardless, they have served as a useful identifier to catalogue gorillas and distinguish them from other specimens being studied in the wild.

Koalas on the other hand are not primates but do dwell in trees and have the most similar fingerprints to humans.

A 2015 study in Australia focused on both chimpanzees and koalas. The scientists doing the research found that chimpanzee prints were actually less akin to human prints than previously stated – at least when throwing koala prints into the mix. These marsupials’ dermal ridges prove to be more similar to humans’ than the primates’ are.

The most important thing to take away from this fact is that koalas’ fingerprints seem to be an evolutionary development. They are in no way closely related to humans. Scientists must therefore assume that this trait, most common in primates, has been independently developed by koalas to make for better skin for climbing.

Studies like the Australian one are make for important understanding of the natural world. It has proven that animal prints can strongly resemble human ones! It’s unlikely a forensic scientist would mistake a pawprint for a human’s hand, but individual prints are eerily similar. Currently, the best way to tell the difference is by the repeated patterns: koala prints tend to favor loops and whorls while human prints have a rather equal mix of loops, whorls, and arches.

There’s still a lot of research to be done on the subject. Scientists have only just begun to study the function of fingerprints, let alone cataloguing all the species of animal who have them. As time goes on perhaps we’ll learn more about our own prints.