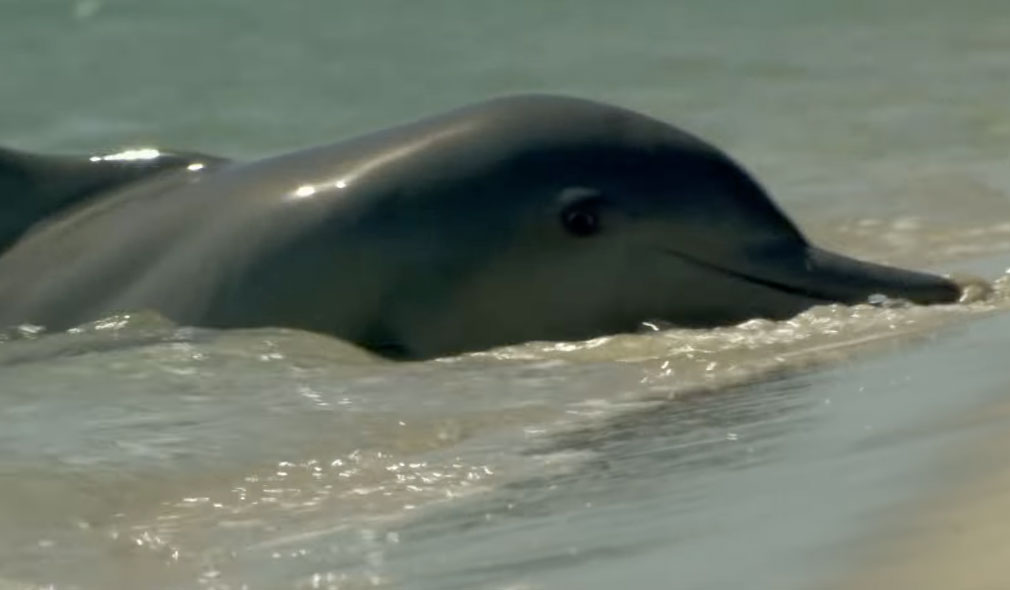 Cetacean stranding is the official term for ‘beaching,’ when a dolphin or a whale gets itself stuck on land. Depending on the species, stranding is explained by several different reasons.

Dolphins Beach Themselves For A Few Reasons

Scientists postulate that the reason why multiple strandings occur is because the leader of a pack-oriented pod beached itself and the others followed suit.

In some cases, a mix of different dolphin species or even a combination of dolphins and whales have stranded together. In these cases, it is assumed that the strandees had formed their own hodge-podge team of sea mammals who, together, came to an unfortunate end.

Single strandings, however, can usually be attributed to injury. An injured dolphin may seek shelter in shallow waters, wanting time to heal, but end up getting caught in a changing tide and be unintentionally stranded in its weak state.

Dolphins can become victims of their own folly. Like bats, these sea creatures use echolocation to navigate its way. Sometimes they can confuse their path, though, and end up beaching themselves on a shallow shore. In these cases, some studies have found the military to blame. The frequencies of the naval vessels’ sonar messes with the animals’ echolocation.

Researches have found that events of this nature are more frequent with whales than with dolphins. In many cases, the sonar strandings seem to have had a dire physical effect on the whales: internal bleeding comparable to the bends, the decompression sickness that uncareful SCUBA divers face.

As seen in the BBC Earth episode The Hunt, bottlenose dolphins have developed their own dicey way of hunting that puts them in danger of beaching themselves. Working as a team, the dolphins drive schools of fish towards the shore by creating a wave that washes them up. These herded fish are gobbled up, Hungry Hippos style.

The dolphins have a rivalry, though. Gulls and herons have learned to follow the hunt and hop in to catch their own food. In competition with the birds, the dolphins will propel themselves further up the bank to catch more prey. This presents a big risk of stranding themselves on the shallow mudbanks.

Climate change or human intervention could be influencing the dolphin’s hunting grounds and running them in to unfamiliar territory, to fatal effect.

It is well known that mankind can have averse effects on the natural world. Dolphins can become caught up in fishing nets as bycatch: unintentional prey of fisherman angling for others. Some stranded dolphins even bear marks of the nets that cut into their skin. In some cases, strands of rope get wrapped around them or caught on their fins. In dire cases, they can lead to stranding.

Notoriously bad for the environment, oil spills will tragically redirect dolphins to the only clean space left: the shoreline. Sometimes even military exercises choreographed in the dolphins’ usual territory can redirect them towards their doom.

What should you do if you find a beached dolphin?

If you find a stranded dolphin, report it as soon as possible. Assume that its life is at risk.

There are many organizations, societies, and non-profits that work to protect marine mammals. Save the Whales, the National Oceanic Atmospheric Administration, and the International Fund for Animal Welfare are just a few. A quick Google search will bring up any conservation efforts in your area, along with hotlines to call. Some even offer apps for reporting strandings which are handy to keep downloaded if you live in a coastal area.