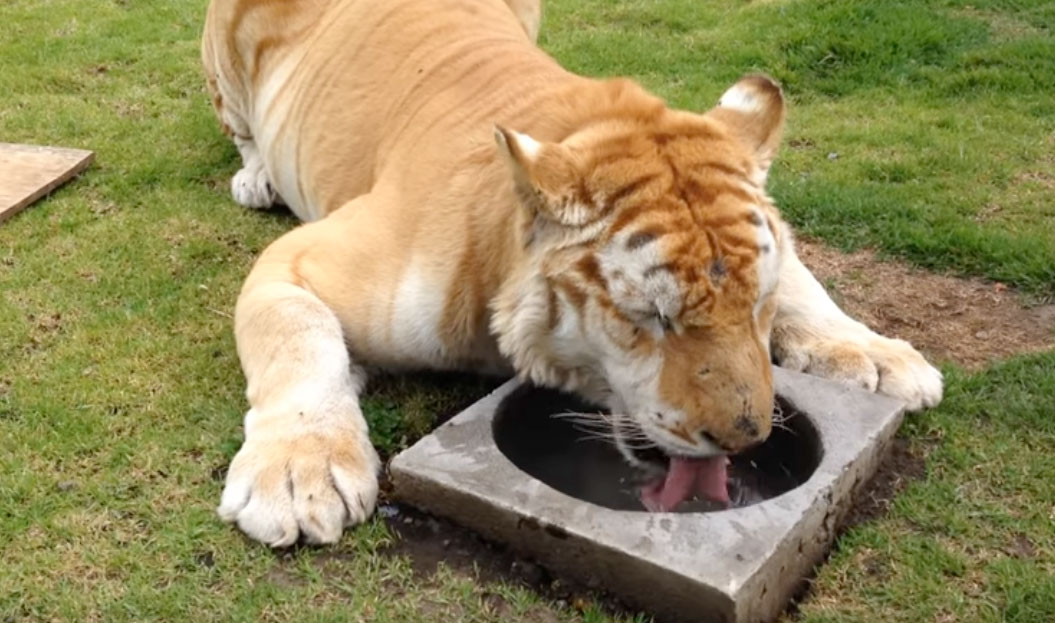 Golden tigers are one of the rarest animals on the planet. These tigers’ stunning coats do not make them a separate species, though. They’re a breed of Bengal tigers. Their unique coloring is actually a genetic mutation from recessive genes.

Also called “golden tabby tigers” or “strawberry tigers,” these flashy felines have very few black stripes. Most are light brown, getting as dark as chocolate on the face and tail, that look like beautiful tea stains on a light tawny base.

Their bellies are a shocking white that covers much of their undersides, legs, and necks, often spreading more into their face than any other tiger. (Not considering white Bengals, of course, who have very dark stripes anyway.) The strawberry appellation comes from strawberry blond hair, not the fruit.

How many Golden Tigers are there left?

There are only about 30 in captivity right now and almost none in the wild. There could be, as this mutation can occur naturally, but the odds are slim. That’s why they’re considered extinct.

The few that have been found in nature live in India, in jungles found near the foothills of the Himalayas. In recent years, scientists have collected photographic evidence of one wild female golden tiger.

They have continued to monitor her in the northeast region of India, in Kaziranga National Park.

The ones living in captivity were bred to exist. Confirmed records of the first golden tiger bred in captivity are disputed, but all are recent: from the 20th century.

How did the Golden Tiger come to be?

All the golden tigers alive today are descendants from the same one. His name is Bhim, son of a white Amur tiger named Tony. That’s right: Tony the Tiger.

Bhim was mated with his sister and the daughter they had together. From these pairings, other golden tigers were produced, all in the same family line. Interbreeding is necessary to engender the golden tiger recessive gene.

This calls in a question of ethics, of course, as the breed wouldn’t exist as much as it does without mankind’s meddling.

Inbreeding is normally frowned upon as much in humans as in the animal kingdom.

In the case of golden tigers, hip problems are prevalent; however, some researchers have come to believe that these mutated tigers are more intelligent than others, though research is inconclusive.

The golden tiger is technically the largest tiger on the planet. The males can grow to be a massive 10 feet long and 3 1/2 feet tall. Despite being Bengal, these tigers tend to grow to be larger than their purebred Bengal cousins.

The gene not only makes their coat a charming color, but actually makes their distinct fur softer. We wouldn’t try to give them a belly rub, though — they can weigh up to 480 lbs and are certified carnivores.

This color mutation is actually a disadvantage to golden tigers in the wild. The bright tones of the cat’s coat do not serve as good camouflage which makes them easy targets in the forest.

What other tigers are endangered

The golden tiger is one of the rarest in the world, but unfortunately there are several others that compete for that lonely title.

The Siberian, Sumatran, Indochinese, and Malayan tigers all have populations of less than 500 which earn them the label of “critically endangered.”

Perhaps the species most at risk is the South China tiger which has not been seen in the wild for more than 25 years. There are more of these in captivity than the golden tiger, though.

Pretty yet in need of protecting, the golden tiger is a rare breed of Bengal. Already endangered, this species relies on our efforts of conservation. Inbreeding poses a potential risk to further development of the golden tiger.

We can only hope researchers get the necessary funding to save our furry friends.