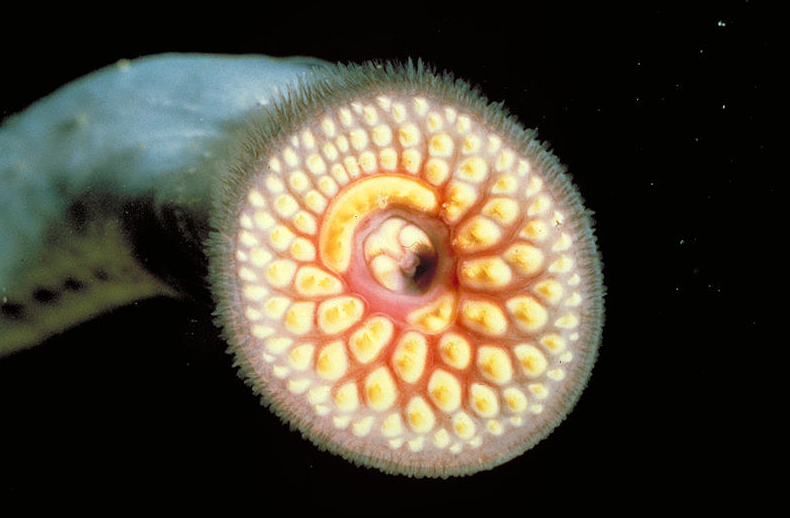 Known locally as the Vampire of the Great Lakes, the sea lamprey is an ancient, parasitic fish that’s lasted for hundreds of years. Commonly mistaken for a type of eel, the lamprey is a basic vertebrate. They’re a primitive fish made up of cartilage and have multiple rows of sharp little teeth in a mouth that flattens into a disc so they can to latch onto their prey and suck the life out of it – like a vampire.

The attributive noun “sea” comes from the lamprey’s native habitat, the Atlantic Ocean. The “lamprey” part of its name comes from a Latin compound: lambere and petra – “to lick” and “stone,” respectively. This name refers to the sea lamprey’s archetypal mouth.

2. It’s generally accepted that the sea lamprey originated in the Atlantic, not the Great Lakes.

In 1829, the Welland Canal connected Lake Ontario to Lake Erie and created a passage from the Atlantic Ocean inland. The sea lampreys used the canal to take over all five lakes within 100 years.

3. Burbot, catfish, ciscoes, perch, sturgeon, trout, and whitefish are all on the Sea Lamprey’s menu.

Sea lampreys suck their prey dry, cutting through the host’s flesh and scales thanks to their sharp tongue. They stay attached to their prey thanks to the suction-cup power of their mouths. The prey is further incapacitated by an enzyme the sea lamprey secretes which acts as an anticoagulant to prevent blood clots and maintain a steady flow.

4. Sea lampreys are the embodiment of an invasive species.

They spread like wildfire from lake to lake, causing devastation among native populations. This unanticipated offensive has crippled industries across the Lakes.

One of the reasons they’re specifically invasive in the Lakes is because in their natural habitat (the Atlantic Ocean), sea lampreys don’t usually drain their prey dry. They feed off them, but stop before the fish dies. In the Lakes, the hosts to the sea lamprey are not evolutionarily equipped to survive the parasite’s attack.

They die, either as a direct result of the attack or later on due to an infection from the wound the sea lamprey leaves behind. The very few that do survive have lifelong health issues.

5. Sea lampreys effect both the ecosystem and the economy.

These parasites effect the whole coastline of the Great Lakes, severely impacting permanent and seasonal businesses – even effecting land prices and tourism development.

The greatest economical effect is obviously on the fishing industry. Before the sea lampreys invaded the Lakes, fishermen in the U.S. and Canada could reel in around 15 million pounds of trout each year, a figure that dwindled to a measly 300,000 pounds by the 1960s – only a mere 2% of their original intake!

Recent measures taken by a collaboration of the two countries, along with local effected tribes, has brought sea lampreys under control, reducing the invasive population down by a massive 90%.

6. Sea Lampreys do not have natural predators

The reason why sea lampreys have been so successful in their infiltration of the Lakes is because they do not have any natural predators in their usurped home. This makes it even more necessary for the government to actively deal with the invasion.

7. The GLFC is in charge of the regulation of the sea lampreys.

The U.S. Fish and Wildlife Service (FWS) and Fisheries and Oceans Canada (FOC) have teamed up to form the Great Lakes Fishery Commission (GLFC). The parasite grows and develops in the tributaries of the Lakes. Careful study and control of these tributaries help the government decide how and where they need to implement their control.

They use a pesticide named after the invasive species: lampricide. It only effects sea lampreys, no other fish or marine animal. It kills the larvae, preventing mature sea lampreys from migrating into the Lakes.

While the lampricide is essentially harmless to other species and the environment, it is expensive, and scientists use other methods to help drive down costs.

Along with the pesticide, the GLFC uses barriers to limit migration as well as reproduction of the species. The barriers are installed high enough to prevent the lamprey from leaping over it (their jumping abilities being very limited), but still low enough for other species to surmount it. Upstream of the barriers, the GLFC sets traps to catch adult lampreys who evaded the first obstacle.

The U.S. Geological Survey (USGC) uses the sea lampreys they catch in traps to study the invaders. They sort out the females and kill them in order to limit their reproduction. The males are injected with a sterilant to prevent further offspring before being released back into the Lakes. It is unclear why they don’t kill the males, too, but it could be that such efforts would be too quick and upset the balance of the ecosystem (even if it is currently weighted in favor of the destructive sea lampreys).

While the lamprey itself only weights about 5 lbs, every year one can kill almost 40 lbs of fish. That’s 3/5 its bodyweight per month. They’re dangerous because of the sheer number of them that exist in a place they’re not meant to.

9. Sea lampreys will not attack humans.

They know the difference between warm- and cold-blooded animals, and only prey on the latter. In fact, they would actively avoid a human in the wild. For this reason, they have never and would never kill a human.

The sea lamprey’s natural instinct is to latch on to things: the glass wall of a tank they’re kept in, the rocks on the sea (or lake) floor, etc. Therefore if one was held up to a human, it will more than likely latch on like a leech does. Its suction is very powerful and could be very painful, exerting severe pressure on the point of contact. While the bite is ultimately painful, no one has to worry about it unless they’re actively introducing the sea lamprey to their own skin.

YouTuber Coyote Peterson experimented with a tank full of the parasites, to no avail. Even though he put his arms in water full of them, not a single sea lamprey tried to latch on.

10. Ironically, the sea lamprey is eaten as a delicacy in other countries.

Spain and Portugal often have them on the menu! Unfortunately, people of the Great Lakes (and the rest of America for that matter) haven’t found the palate for them, so population control methods need to be maintained to prevent the sea lamprey from further devastating the region.