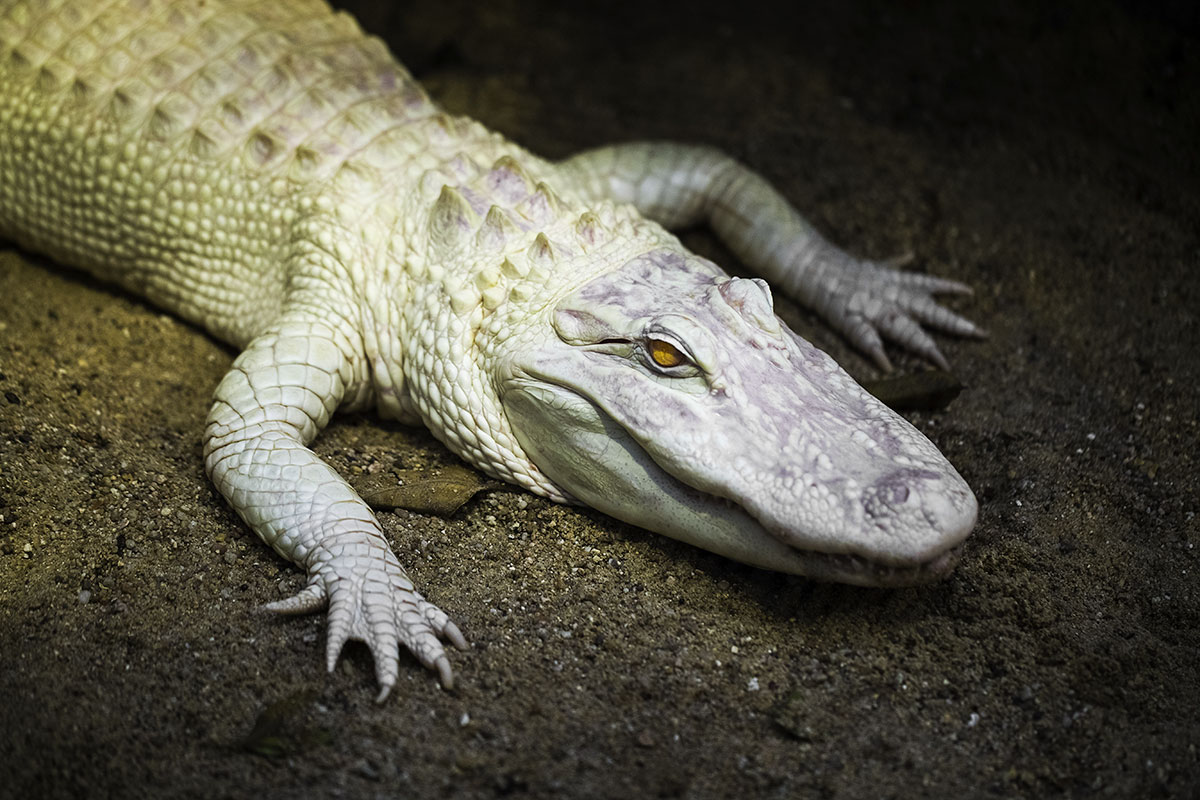 1. Albinos of any species are beings whose bodies can not create melanin

The pigment that colors skin and eyes. This leads to the being’s skin being unpigmented, which ends up looking white. This occurs even in alligators who are born with albinism. The scaly reptile has ivory colored skin. It also has lightly pink-tinged eyes, rather than the usual black and green. This condition affords the gator absolutely no camouflage protection in the wild, putting albino alligators at severe risk.

2. Albinism is inherited through genetics.

If a parent carries the gene for it (even if they aren’t albino), they can pass it down to their offspring. It’s a recessive gene, though, meaning both parents need to carry it (again, even if neither is albino) in order for it to show through. Otherwise, it can be passed through several generations before ever showing. This is why albinism is rare. Some nature parks have tried to breed albino alligators as an attraction. They do this by mating two albino alligators. It’s easy to see they carry the trait, so there’s no guesswork or genetic testing.

3.Albino alligators are more common than you may think.

They’re not all over the place, regularly running wild throughout the swamps, but there are quite a few out there. One reason they may seem to be more common than you’d think is because of the low population of alligators in general. Alligators in general have been a threatened species in the past. In the middle of the 20th century, they were officially listed as endangered. This lasted only 20 years, but the devastated population from that time impacted all alligators, including albino ones.

It’s hard to determine exactly how many albino alligators exist in the world, especially out in the wild. Scientists don’t track every single one that’s born. As of 2019, biologists estimated that there were only about 100 in the whole world. 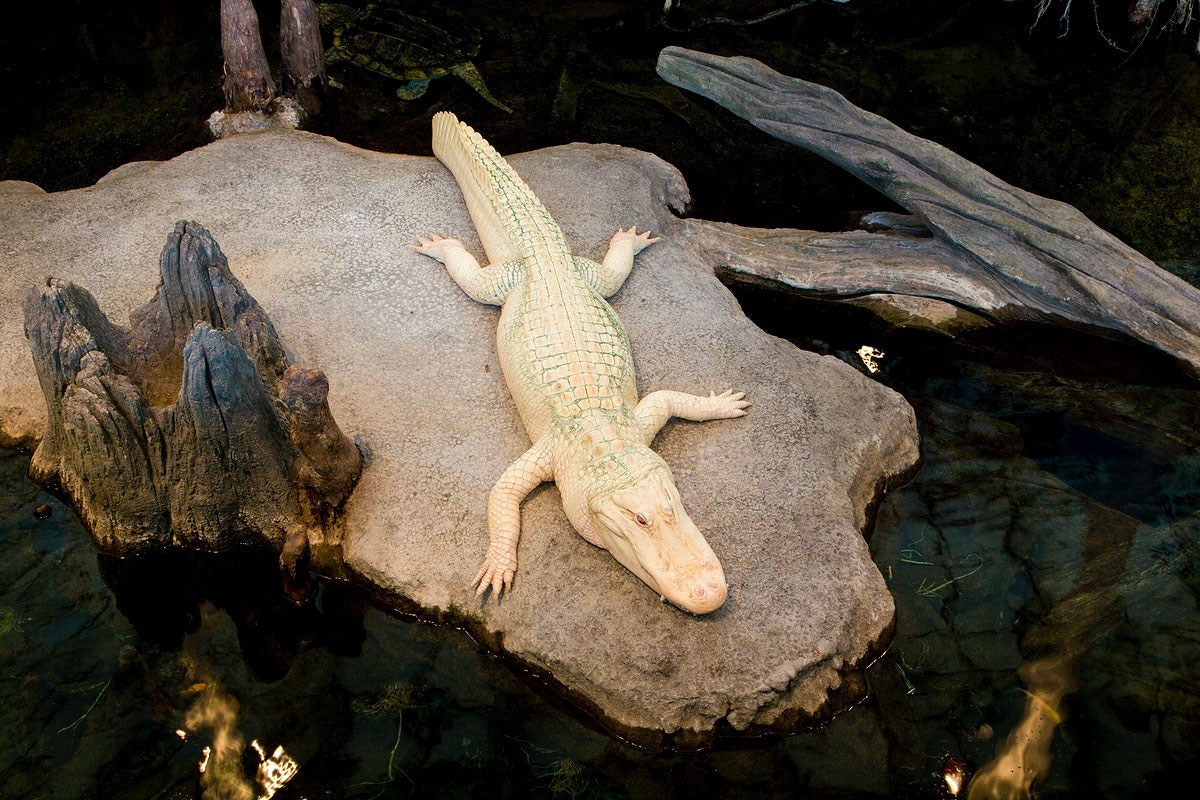 4. Despite having depigmented eyes of a very unusual color, being an albino does not necessarily make one blind.

Their eyes are definitely more sensitive than non-albinos, but this sensitivity doesn’t necessarily impede the organ’s function. One albino gator Claude, who lives in California, is unfortunately visually impaired. He’s not fully blind, but does have trouble seeing so that he has a tendency to bump into bits in his environment.

It shouldn’t be surprising that most alligators in captivity thrive in warmer climates such as Florida. Nature reserves set up for the protection of the species recreate bayous for these reptiles to thrive in.

5. Snowflake is an albino alligator who lives at the the Augustine Alligator Farm Zoological Park in Florida.

Interestingly, he spent a short amount of time at the Brookfield Zoo up in Illinois. Chicago may be the windy city, but it’s nothing an albino alligator can’t handle! Suffice to say that the professionals know what they’re doing and how to keep a gator cozy. They monitor the conditions of their enclosure carefully — no matter what climate the gator park is in — especially making sure to keep albino alligators warm enough, while also out of the direct sun.

Alligators in general may live longer than you think. There’s not enough data for them, due to the recent endangered period, but some of the oldest recorded alligators are over 80 years old! It’d be reasonable to say their lifespan is usually the same as a human’s. Being an albino doesn’t change their natural lifespan, though it could make them an easy target for predators.\

6. Gatorland, a gator park in Orlando in Florida, is home to three white alligators over 30 years old.

Their brother, Bouya Blan (who, by the way, has his own IMDb page!) is the same age and lives at another park called Fun Spot. These four brothers aren’t exactly albino, though. They are called leucistic alligators. They have white skin, blue eyes, and sometimes dark spots and markings on their skin almost like a Dalmatian. They are genetically different from albinos, but look similar and are often confused for them. Remember how there are only about 100 albino alligators in the world? There are less than 15 leucistic ones!

7. Albino alligators’ unpigmented skin may look beautifully unique, but it comes at a price.

These reptiles are damaged from prolonged sun exposure. This is a particular problem as alligators as a (cold-blooded) species usually spend hours basking in the sun to regulate their body temperature. Albino gators are unable to do that without suffering severe burns. In gator parks, zoos, and aquariums they are kept in special enclosures that shelter them from direct sun.

It’s not just their skin they have to worry about, either. Their eyes can burn as well if they’re not careful, severely impacting their field of vision. There’s no record of burning one’s eyes to the point of blindness, but burnt eyes can take some time to heal before the gator can see normally again.

8. It may be obvious that if an albino alligator grows up in the wild, its lifespan is bound to be short.

Think of the color of the bayou. All shades of green. Think of your typical alligator’s skin. Also green. Throw an albino gator into this setting and they don’t stand a chance against predators. They make for easy targets, especially when they’re young and weak. An albino alligator could survive in the wild if it were lucky

For Californian albino alligator Claude’s 15th birthday (back in 2010) they made him 15 fish-shaped cupcakes. If he really lives as long as anticipated in captivity, they’re gonna need a lot more gator chow to mark the years.