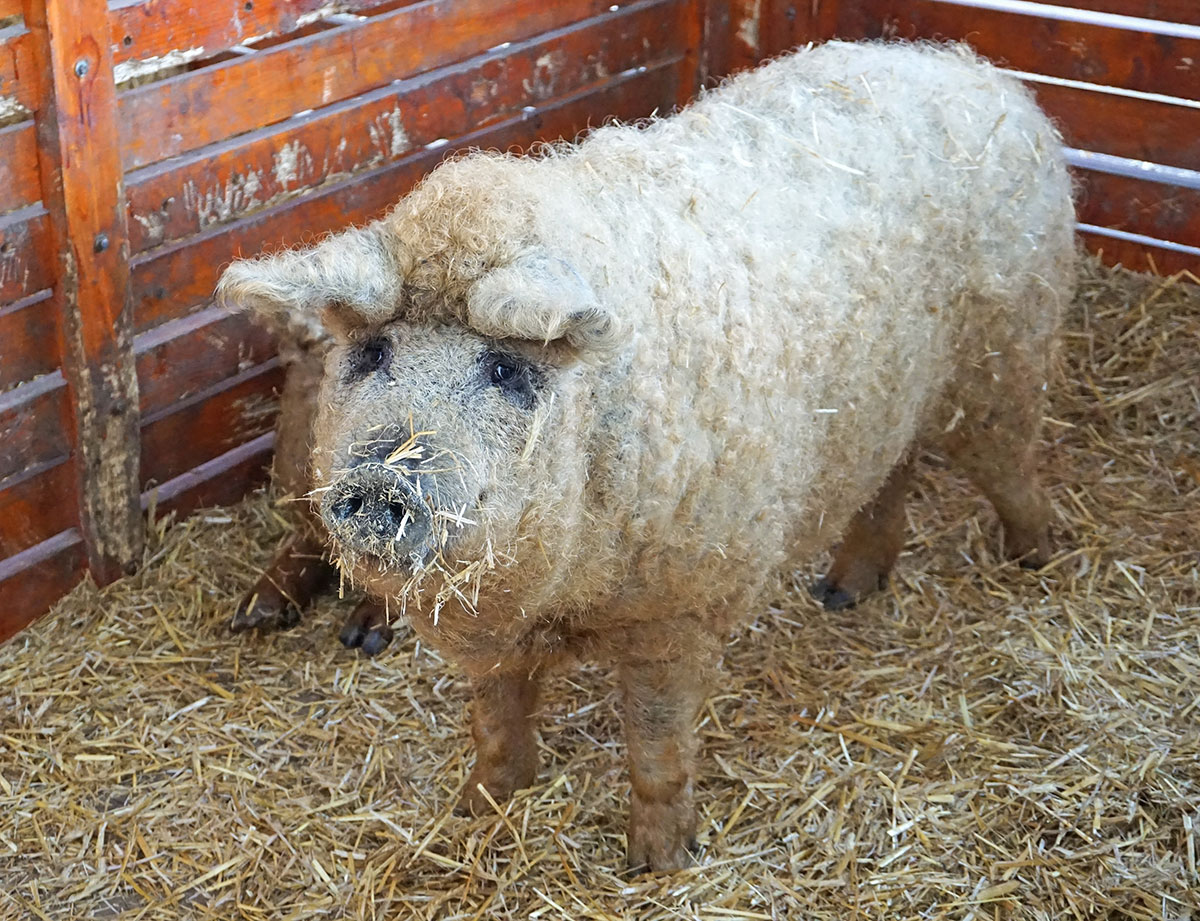 Can you picture what a pig crossed with a sheep would look like? There’s no need – the Mangalica pig is a living example of such a barnyard blend. It’s actually referred to as “the pig-sheep.” This remarkable porcine and its luscious locks have had a complicated history and a strong come-back.

1. Native to Hungry, this permed pig sports a back covered in fluffy, white curls of hair that grows long in winter, just like sheep’s fleece.

Though most are blond, they can also come in red or swallowtail (black and white). Black Mangalica went extinct and no longer exist today.

2. Originating in the 19th century, it’s one of the oldest breeds of pig in Europe.

The Mangalica was the result of crossing Sumadija and Szalonta pigs and was originally bred solely for the royal Hapsburg family. In a hundred years, from 1850 to 1950, popularity of the pig boomed as people cultivated its ample fat for a variety of uses, from cooking to cosmetics to candles — even for making explosives!

The conclusion of World War II devastated Hungary and almost destroyed Mangalica farming entirely. Add in the the rise of the purported evil of fats that was popularized in the ‘50s and demand for the pig’s meat further declined, hindering their breeding. By the 1970s, the pigs could only be found in zoos. In the ‘90s, there were only about 30 breeding females left of the Mangalica species. Less than 200 of these pigs in total forecast certain extinction.

4. It was rescued from the brink of extinction by Juan Vincente Olmos

A businessman who saw the potential for a revival saved this species. Juan Vincente Olmos contracted an agricultural engineer to cure Mangalica meat in the hopes of rivaling Iberico ham. Together, Olmos and Péter Tóth founded the company Olmos és Tóth Kft. (Olmos and Tóth Ltd.), specializing in the sustainable rearing and slaughter of Mangalica pigs. Today, there are more than 25,000 living in Hungary — that’s 120x more than there were 30 years ago!

5. The Mangalica pig is currently reared primarily in Hungary.

Olmos és Tóth Kft. is the company responsible for their existence. They work directly with Monte Nevado, a cured ham retailer in Spain. Aside from these initial revivalists, there are now over 200 farmers who raise Mangalica pigs across the country. Some have even started exporting them to farm in Romania. Mangalica ham has begun to go above and beyond eastern Europe, though, as its resurgence has brought it into the wider world.

6. It’s slowly made its way into Japanese cuisine where it has been nicknamed “Kobe pork.”

The pig carries almost 70% fat, whereas other species normally only carry 50%. Its taste is so unique because the Mangalica’s fat-to-flesh ratio forces the flavor to concentrate within the small percentage of meat. Add in their natural diet and serene living conditions and you can almost taste the happiness.

There is a long process behind curating the perfect flavor. The meat is first cured in salt before it is dried in a natural environment for the freshest taste. A ham could be drying in the cellar for up to three and a half years. The final product has a nutty quality to it.

7. One reason Mangalica ham is coveted is due to its rarity.

Its brush with utter extinction has made it a distinct delicacy. Another influence on its rarity is the amount of time it takes to cure the meat. The high fat content makes it take so long to dry — there’s no way to naturally speed up the process. All foodies know that any aged food product tastes better the longer you have to wait.

Both boasting fatty specimens, the two species differ in what they’re raised on. Mangalica pigs eat corn and wheat while Iberian pigs are fed grass and acorns. Their diet affects the flavor of their meat. Ironically, the acorn-eating Iberian pigs have a less nutty flavor and tend to be more sweet, whereas the Mangalica has a fine, aromatic flavor.

How much
Depending on what experience you want, Mangalica can be pricey. Monte Nevado is the original retailer that specializes in cured hams. You can buy an “Jamón Mangalica Original” — a mouth-watering 15 pounds of ham for approximately $279. There are various options from there regarding weight and cut of meat. If you’re not ready to commit to this gourmet delicacy, you can order a tasting pack that comes with half a pound of jamón Serrano, jamón cebo Ibérico, and jamón Mangalica for only $20.

If you’re looking for a relatively cheaper experience, without importing it, there are some American farms who have imported the species and started raising what they’ve deemed American Mangalista. However, they tend to offer non-traditional products, catering to an American market, rarely offering cured hams. Many sell pork chops, ribs, and especially lard for reasonable prices.

These seem to be two different experiences, though. While the Mangalica undoubtably boasts fine quality meat, part of the classic enjoyment of it comes with the flavor it gets from the curing process.

Mangalica meat costs a lot to buy because they cost a lot to rear. They have all-natural diets and are always raised free range. This takes money, but also time. Mangalica farmers can’t churn out a lot of product quickly. The pigs reproduce slowly and their meat cures slowly. Patience is key for enjoying this luxury food.

If you’re not ready to import 15 pounds worth of pork, a simple Google search will come up with a fair few retailers of American Mangalista. Double check where they deliver, though, as some only ship regionally.

Registered as a national treasure of Hungary, the Mangalica pig has had a life-saving renaissance. Its comfy lifestyle lends to a delicious product. Michelin star restaurants across the globe have begun to take advantage of its unique flavor profile. The only think we’ve not seen yet is whether or not its hair can be put to good use. Wool sweater, anyone?