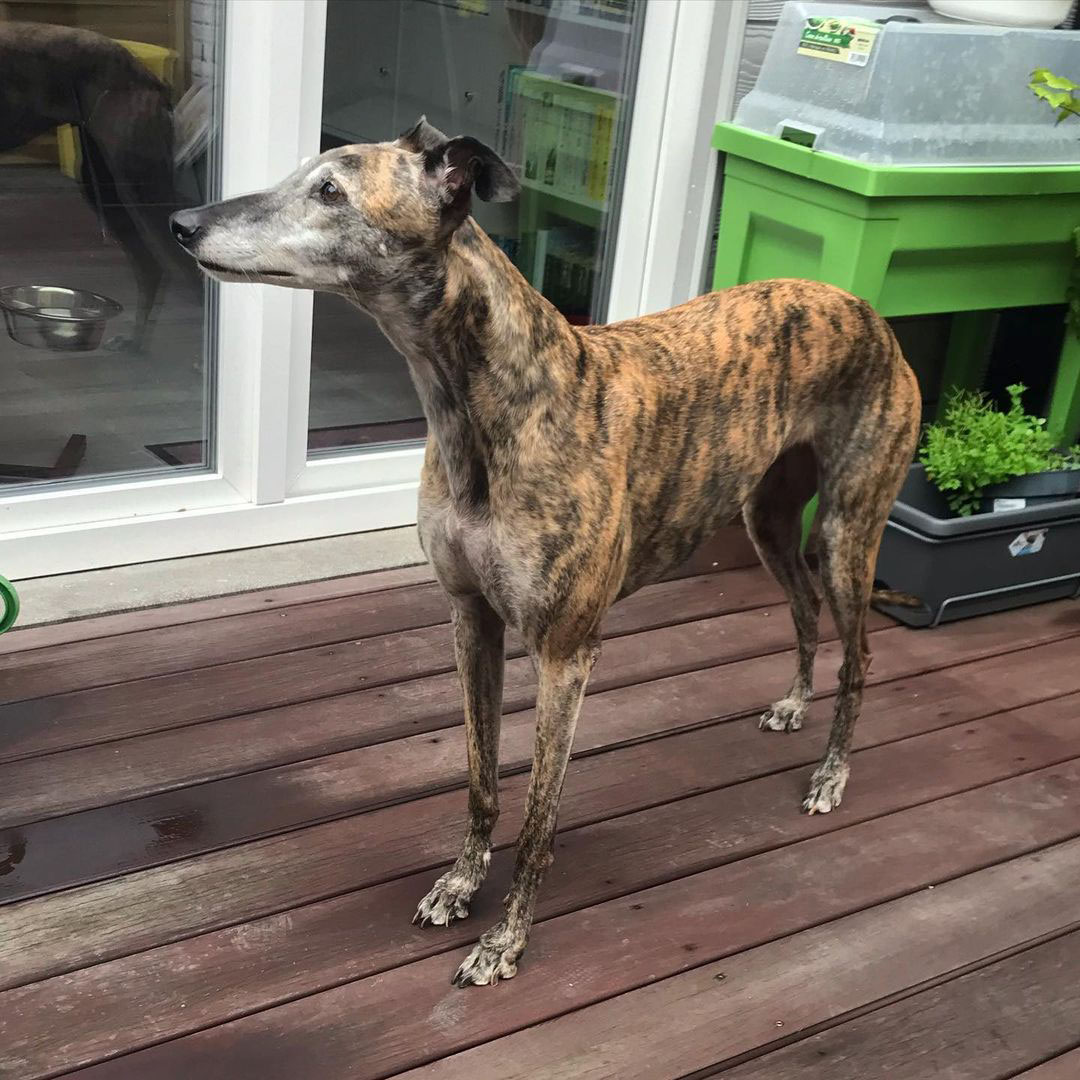 Greyhounds are popular breed known for their sleek profiles and fast speeds. Their name comes from several roots, one of them being the obvious: traditionally, the most common coat color was gray (grey). They come in a variety of coats, none perhaps as unique as the brindle Greyhound.

What is a Brindle Greyhound?

Brindle is to dogs what tortoiseshell is to cats. Usually it’s a random, marled pattern in shades of red, brown, and black. It’s a distinct coat coloring that is passed down through a recessive gene. The pattern and color variety of brindle can vary greatly based on other genes the dog carries. Sometimes there can be hints of silver, tan, or blue. Currently, the AKC recognizes six types of brindle in the Breed Standard in Greyhounds (the complete list can be found on their website) and acknowledges but does not qualify another five brindle color combinations.

In general, it tends to be a stripey pattern that is not as defined as a zebra or tiger, but has more solid lines rather than spots and dots as seen on merle coats. On longhaired breeds like terriers it simply looks like a smooth array of highlights and lowlights whereas brindle tends to be quite a marked pattern on Greyhounds because of their short coats. It is possible to have a reverse brindle, where the base color is darker than the stripes. Any of these color variations don’t affect the dog itself, though. A brindle Greyhound is still a Greyhound in every way.

While brindle can be a very rare pattern on certain breeds, it doesn’t seem to create such a stir in the Greyhound community. It is not the most common, nor is it rare. It seems to be an average variation of a beautiful dog.

As long as it’s a purebred Greyhound, it’s a purebred; brindle doesn’t affect anything about its status there. As mentioned, the AKC recognizes quite a few brindle Greyhound coats, but not all.

How much do Brindle Greyhounds Cost?

Greyhound are some of the pricier pooches. You could pay a breeder as much as $3,300 for a puppy depending on where you look. However, there are also Greyhound rescue charities who rehome retired racing dogs for a fraction of a price. Only a couple hundred dollars could get you a lovable adult dog.

The average age of a Greyhound is higher than that of most dogs its size, averaging 12 years. That’s the average, though, and reports of dogs living to 16 have been recorded.

What kind of health problems do Brindle Greyhounds have?

Greyhounds in general are relatively healthy dogs when compared to other purebreds. No animal comes without its health risks, though. The Greyhound’s unique shape has been lauded by artists through the years, but their deep chest makes them prone to gastric torsion: a life-threatening condition where the stomach enlarges and sometimes twists.

Some can inherit Greyhound neuropathy, a degenerative disorder which involves sensory loss and muscle weakness. It’s most common in Greyhounds who are descendants of show dogs from the ‘60s, when a spike in this breed caused a lot of inbreeding. Genetic testing can determine the presence of it in your pooch.

Greyhounds can also fall victim to osteosarcoma, a bone cancer; hip dysplasia; and sensitivities to anaesthesia (which in some cases could be deadly) and insecticides. 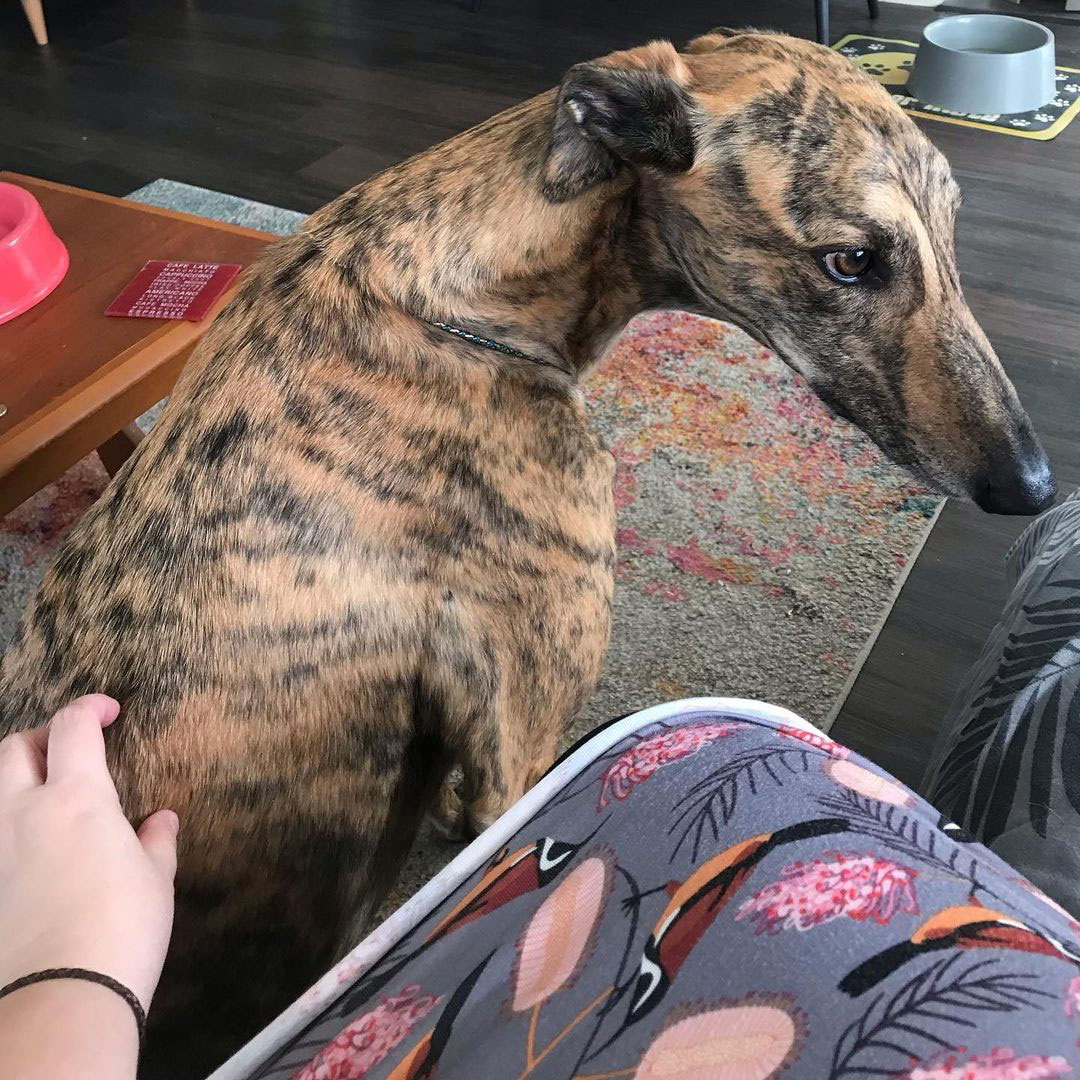 Greyhounds break the mold a bit in terms of being a loyal pet. While they’ll not doubt stick by, they’ll do things with you, not for you. This makes them surprisingly independent for a dog, mixing the beloved characteristic of being an outgoing pet with moderate trainability. They’re not impossible to train, but it will take time and patience.

The same sentiment pairs with their sociability. Greyhounds are playful pups, but do need to be trained to interact well with others. Especially smaller children. They’re big and fast and not particularly disposed to put up with a cloying child. They’re not especially dangerous, they just need time to adjust. Adopting a Greyhound won’t be an overnight experience. Indoctrinating it into the family life requires a bit of work and some agencies won’t adopt a dog out to a family with kids under 6 years old.

If you’re thinking of introducing a Greyhound to the family, you’ll have to think about who’s already living with you. Greyhounds are the type of big dog that will react to those pesky little toy dogs and their disproportionately big personalities. Most Greyhound owners regularly keep their canine leashed in busy dog parks and keep a firm hold on it, as this brisk breed tends to run off to chase little animals.

The history of the breed goes back to ancient Egypt, when they were used as sight hounds to seek out and chase small wildlife in the deserts. They’re natural-born chasers. If you’ve got a smaller pets at home, introducing a Greyhound should be done with great care in mind. As always, it’s best to start with a puppy who hasn’t formed any habits yet and train them up to behave. It’s not impossible to adopt an older dog and introduce them into your flock, but you will need to keep an eye on the lot of them to make sure everyone behaves themselves.

The environment where Brindle Greyhound can thrive

You don’t need to be fit to keep up with your Greyhound. As long as you have access to a good enclosed space, like a large dog park or fenced-in nature walk, or have your hound trained to come back when called, it’s great to let ‘em loose. Just because they can run fast doesn’t mean they have to – you shouldn’t let your dog off the lead unless you’re confident it won’t get loose. Even Usain Bolt would have a hard time keeping up with their speed.

Though they’re known to be racing dogs, Greyhounds are actually couch potatoes. Just because you’ll see a blur of fur race laps ‘round the park doesn’t mean they won’t also sleep up to 20 hours a day! Daily walks are great if not necessary, but they’ll also love settling down on a big sectional for most of the day.

Many people may not believe it, but Greyhounds are great apartment dogs. They do absolutely fine in small spaces like condos or shared living facilities as they just need a corner of the couch to curl up on and aren’t known to bark like other dogs. Of course it’s nice to have a yard, but Greyhounds don’t need as much playtime as others.

Greyhounds hold the ranking title of fastest dog and being brindle doesn’t slow them down. These banded beauties are a testament to the canine world and all the shapes and sizes that exist within it. If you’ve always wanted to own a Greyhound, a brindle one would make for a unique and lovely pet.