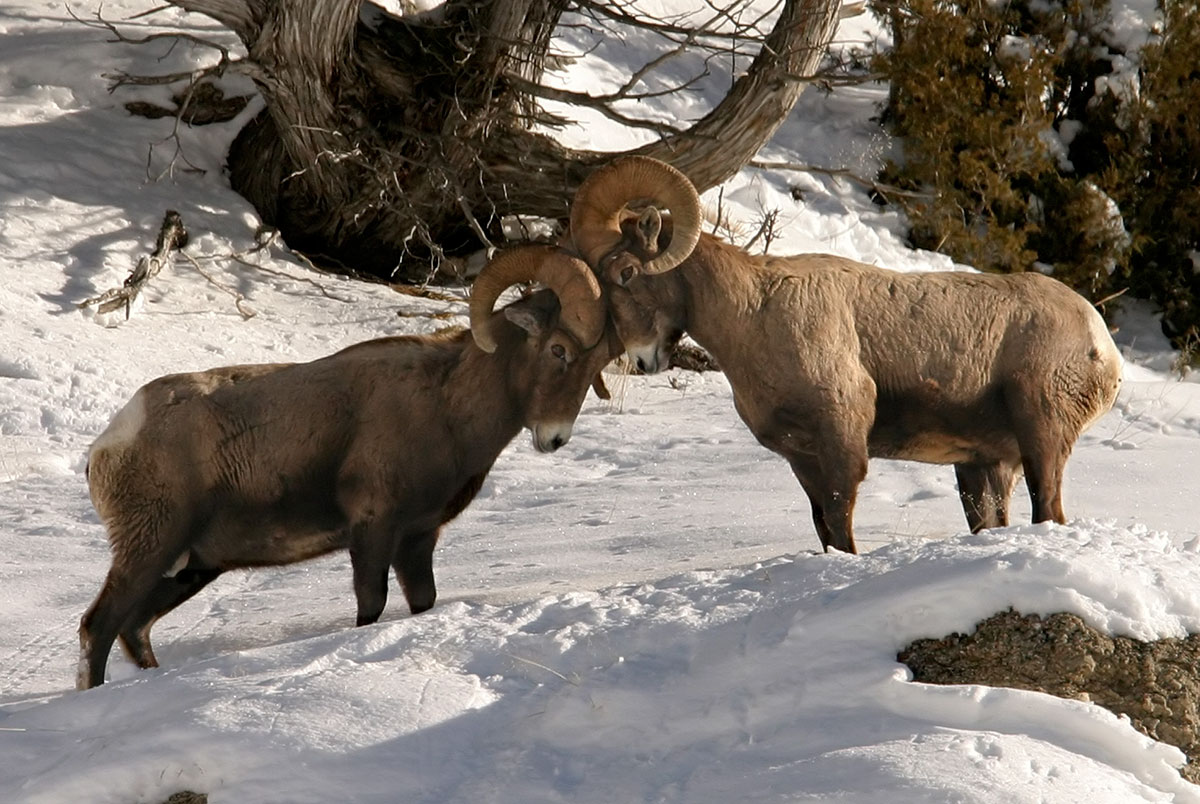 In almost every species of animal — from the sky to land to sea — competition is fierce. Traditionally, males fight each other for status, mates, and territory.

One of the most iconic head-to-heads is the actual headbutting competition seen between two rams.

From seemingly docile livestock to wild bighorns, male sheep develop horns that are both visually impressive and useful. Like many bizarre habits in the animal kingdom, scientists look into why rams headbutt and if there’s a good reason for why they do it.

As with most remarkable traits in nature, a bighorn sheep’s horns are used most in the mating season.

Their impressive size isn’t what wins a mate for a ram, though; the horns are more useful against other male sheep rather than for endearing the ewes.

There are three tactics bighorns use to lock down a mate: tending, coursing, and blocking. The third tactic is when rams prevent an ewe from going to the usual mating grounds, blocking her from potentially finding another mate.

Tending also speaks for itself: a ram chooses an ewe whom he defends from others throughout mating season, tending to her rather than competing for her. Strictly defense.

Coursing is when two rams clash over an ewe. Offense. Though the latter is the most well known behavior of rams (otherwise we wouldn’t be talking about it here!), it’s actually the least effective mating strategy.

Researchers have found that ewes prefer coursing males and the long-term commitment it proves.

Young male lambs will practice the technique in play with each other, coupled with some challenging dance moves.

Butting isn’t strictly reserved for male sheep, though. Ewes do it, too. They’ll undergo this physical competition as a way to assert dominance within their ranks.

Nor is butting reserved for within the ranks of sheep. Sometimes, the need to defend oneself or the herd arises and retreat isn’t an option. In this case, a ram will headbutt a potential predator. Plenty of videos exist on the internet of rams attacking an opponent – in one case, a passing car.

How do Rams not break their necks?

How do you protect yourself when riding a bike over bumpy terrain? Shocks help to lessen the impact and prevent you from getting hurt. Rams enjoy a similar protection that is naturally built into their body. Their horns are not made from bone. They are made out of keratin, the same substance that makes up sturdy horse hooves, even human fingernails.

Once a ram’s horns start to grow in its adolescence, they continue to grow throughout the sheep’s life – never shedding or breaking off. While the horns can sometimes be damaged or chipped at from fighting, they are there for life. Layers and layers of keratin pack a punch when they need to, but are protective of the epithelial tissue beneath. The horns act like shocks to absorb the impact.

Do Rams get concussions/brain damage?

Two rams collide with ten times the force of two human football players. Even so, researchers cite no observations of sheep suffering concussions or brain damage from their headbutting.

They hypothesize that this is due to the Bubble Wrap effect: a moment when the blood’s flow from the head back down into the body is slowed, maintaining a higher concentration of blood in the brain. This protection stops the brain from rattling about in the skull, preventing it from being bruised or concussed. What’s more, the core of a sheep’s horn is hollow, further distancing the brain from the point of impact.

Some researchers don’t agree, however. Andrew Fark, a headbutting specialist, says that many scientists assume “these animals don’t have problems from a lifetime of head-smashing … but it’s not proven.” Sheep don’t live long enough to develop the degenerative brain conditions associated with repetitive head-on collisions, so researchers really don’t have much evidence to firmly state that sheep don’t suffer brain damage.

Farmers could unknowingly encourage butting behavior in rams. While cute little lambs may be irresistible, petting a ram on its head could actually encourage the development of butting. They make take a sweet gesture such as a scratch on the head to be a challenge.

It’s important, when keeping livestock, to dissuade this behavior early on. Whereas with a dog, a friendly fight can just be play, the ram will see you as a part of the flock and not hesitate to headbutt you to reinforce its dominance.

That’s why it’s highly recommended to never turn your back on a ram. Even if he doesn’t seem like he’s about to charge, you never know. And if he’s got a good amount of space for a run-up, when he finally makes contact he can really pack a punch.

It is especially prudent to keep an eye out for threatening behavior during mating season, when they are most likely to get aggressive. Even a friendly ram will fall victim to its natural instinct during a hormone-fueled time.

While it may not have been surprising to read that rams’ horns are used in mating techniques, the way they work could be new information. It’s always impressive to find ways other mammals vary from mankind. Sometimes what we learn from our furry friends is useful in developing new technology to protect humans.

Why Are Pandas Bad At Mating?5 Reasons Why You Should Adopt A PetWhy Did Omayra Sanchez's Eyes Turn Black?